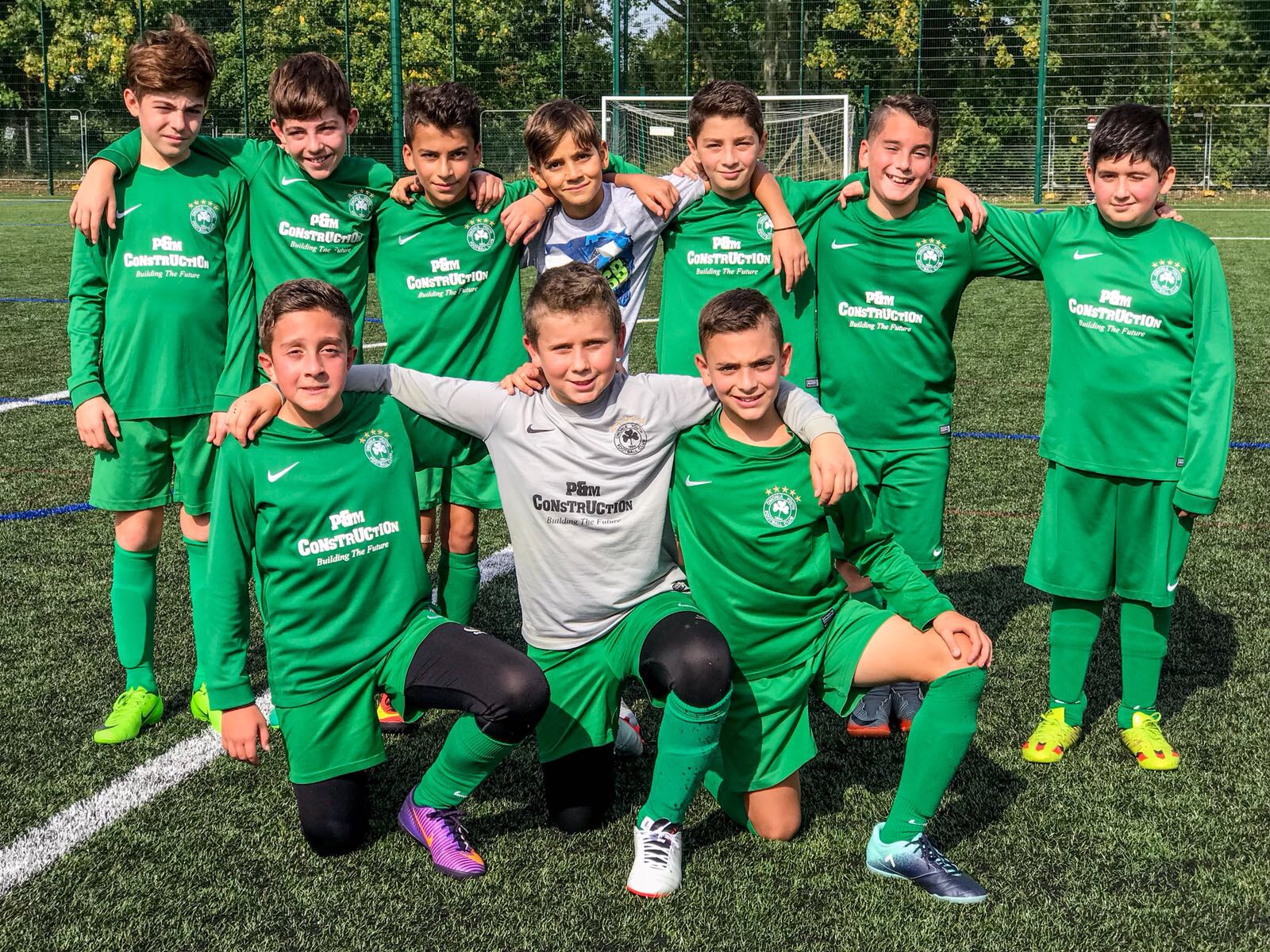 Community football club Omonia Youth FC, sponsored by P&M Construction UK Ltd, saw many of their teams return to league action and there were plenty of positive results.

Michael Pieri’s Under 13 White had an early start on Sunday and even though they had to play with 10 men for the whole match, they came away with three important league points. Two games played and two games won sets up the season nicely. Panos Chambi (2) and Alfonso Rosselli (2) got the goals with Alfonso Rosselli also named Man of the Match. Manager Michael expressed pride in his team, commenting “…the resilience, the determination and energy they showed was outstanding. They deserved their victory.”

By contrast Jimmy and Chris Mousicos’ U13 Gold suffered a 5-2 defeat. Cem and Louis scored the goals with Cem Poyraz named as Man of the Match.

A poignant and respectful start to Savvas Zavros’ Under 12 Gold match as both teams held a one minute silence as a mark of respect due to the passing of one the U12 Gold players’ grandfathers last week.

It was the team’s first competitive league match of the season with manager Savva praiseworthy of his team. He said:  “…it was an all-round great performance by the boys who fought hard during the whole match, had two goals disallowed and achieved an excellent 2-2 draw.”

Callum Howley got both goals with Anthony Kyriacou named Man of the Match.

J Muhammed (2) and S Papamichael. Man of the Match was D Firat.

Adam Demtri’s Under 12 Silver lost 3-2 in a close game where they were denied a result after conceding in the last few minutes.

In the Mid Herts Premier Division the coaching and management team of Neo, Varney, Dean and Mario commented that their Under 15 Green took time to get going. Despite dominating the first half and missing a whole host of chances the score remained 0-0 at half time. The deadlock was broken midway through the second half with Lawrence Young scoring a great near post header from a corner. The game was settled with 10 minutes to go with a fine finish from George Stasi. Man of the Match was Barsa Mirtahmasebi with a disciplined performance in midfield.

In the Challenge Cup Nick Georgiou and Kenny Gregori’s Under 15 White lost away 12-0 to a team that plays two division higher. Man of the Match was Nick Georgiades

Chris Gregoriou’s Under 16 White played their first league game of the season after promotion into the White Division but made it difficult for themselves. They fell behind to an early goal and playing on the counterattack wasn’t working on a small pitch so a change of formation and personnel made all the difference. Two goals from Max and Alex were decisive as the team went on to win 2-1. Man of the Match was Max Alan.

Omonia Youth’s Under 15 representatives in the London Youth Premier League lost 4-1. They were leading until the last 20 minutes but then tired. Overall boys can hold their heads high. Goal scorer was Youssef.

Kyri Haili and Mike Petrou’s Under 14 White played their first league game of the season and dominated possession to run out comfortable 3-0 winners.

Goals from Loui Petrou, Alex Theohavour and Hoa-xing. Man of the Match was PG Beer.

Tony Kromidias and Mario Stavrou’s Under 12 White also played their first league match of the season and it was a nail biting contest which ended 5-5. There were some great examples on how football should be played and both coaches were very proud. Goals from

Louis (2), Val, Agim and Alex. Man of the Match was Mikey

Kyri Georgiou’s Under 16 Green saw victory snatched away from them as they conceded a stoppage time penalty to draw 2-2. In a match where they were in control for large parts of the game and where they created far more goal scoring opportunities than their hosts, this match should provide a timely lesson in how to see out a game and get what they deserve.

Goal scorers were Costas Stylianou and Michael Speers with Andreas Georgiou named Man of the Match.

In an entertaining game Demi Shiamishi’s Under 14 Green won by the odd goal in nine, winning the match 5-4 with the last kick of the game.

U12 Gold observe a minutes silence