At the end of every season, the club organises a Presentation Day where every team gets together to award their players a trophy for their participation as part of the club.

Every team also awards a prize for the following:

In addition, the club has three special awards:

The Andreas Kyprianou Top Goalscorer Award is named after former Omonia Youth FC player and son of former chairman Kypros Kyprianou. The award was named after him as he had completely dominated the award during his 10 years at the club. Every year for the last five years Andreas has returned to award the trophy. This is only open to 9 and 11-a-side teams.

This is awarded to the goalkeeper across all 9 and 11-a-side teams who has kept the most clean sheets.

This is a special award named in memory of one of the club’s former players, Steven Toumbas, who in December 2008 died suddenly at the tragically young age of 20 years old. Since this unfortunate and very sad time, the club dedicated an annual award in memory of his name. The Steven Toumbas Achievement Award can go to any player or person associated with the club whereby nominations by managers and subsequent review by the committee will be assessed. The award winner receives a plaque in their name to keep.

We always hear about children being resilient, being strong, and having the ability to take things in their stride. But we don’t always see it or hear about it. U16 Girls coach George Pantelides made us aware of one such case. This year’s Steven Toumbas Achievement Award recipient is a girl who has had to overcome some struggles, seen her mum diagnosed with a serious illness but who has never waivered in continuing to be the best that she can be. It has been a very tough time for her but she has remained committed to her football, continued to be positive and hardly missed any training or matches. She has been described as ‘a truly inspirational story’. It is therefore with great honour that we present the 2020 Omonia Youth FC Steven Toumbas Achievement Award to Mary Koumouris. 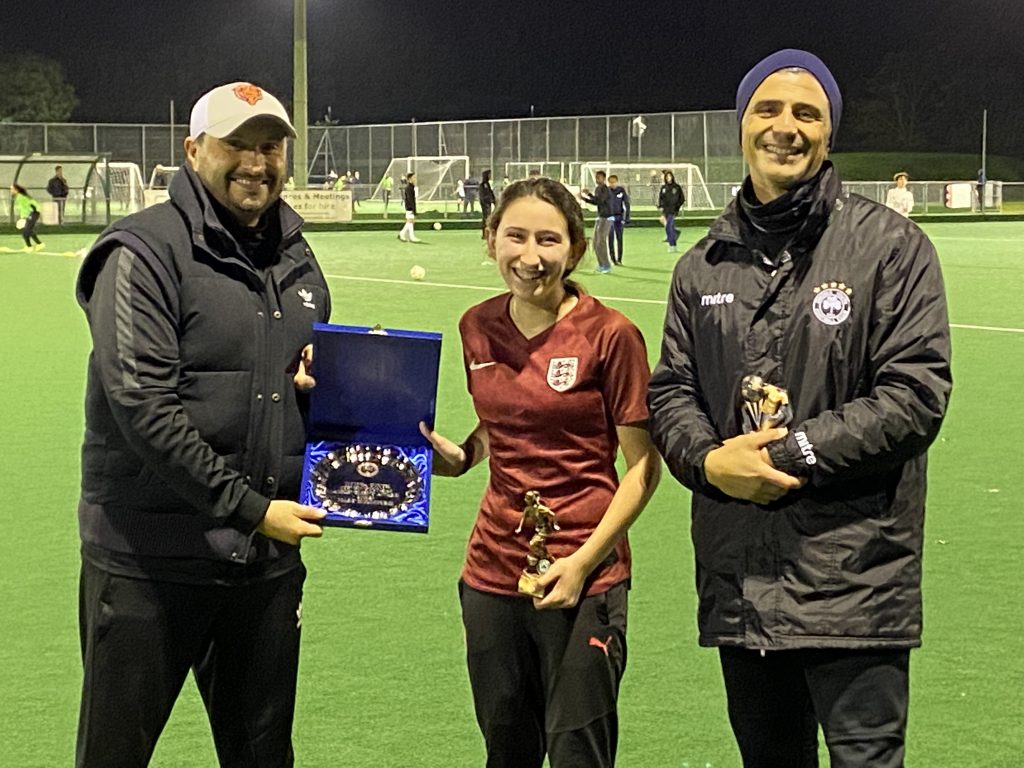 Determined and resilient, Mikey has shown even at his tender age even when the most difficult of obstacles that are put in front of you they can be overcome. Mikey is football mad, loves Arsenal and dreams of being a professional footballer. When he sadly lost his sight at the age of 7, that dream did not end.

In fact the dream continues and gathers pace. Mikey has shown incredible courage, resilience and determination to continue learning and developing his football skills as he continues his football journey.

Guided by his doting parents John and Mireille and with teh support of his younger brother Angelo, it is a truly heart-warming story and the fact that Omonia Youth FC played a small part in Mikey’s  football journey makes us proud as a club. This fact is also acknowledged by his parents and Mikey himself and I hope you all agree that it is fitting that 2019’s Steven Toumbas Achievement award should go to Mikey Poulli and his family. 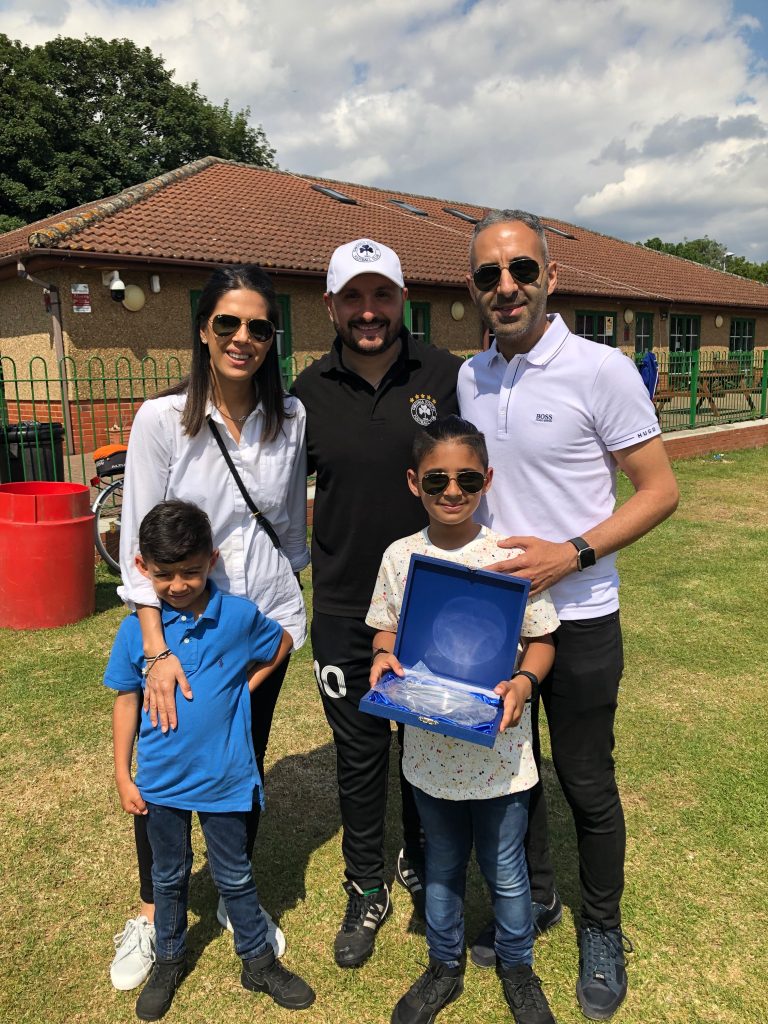 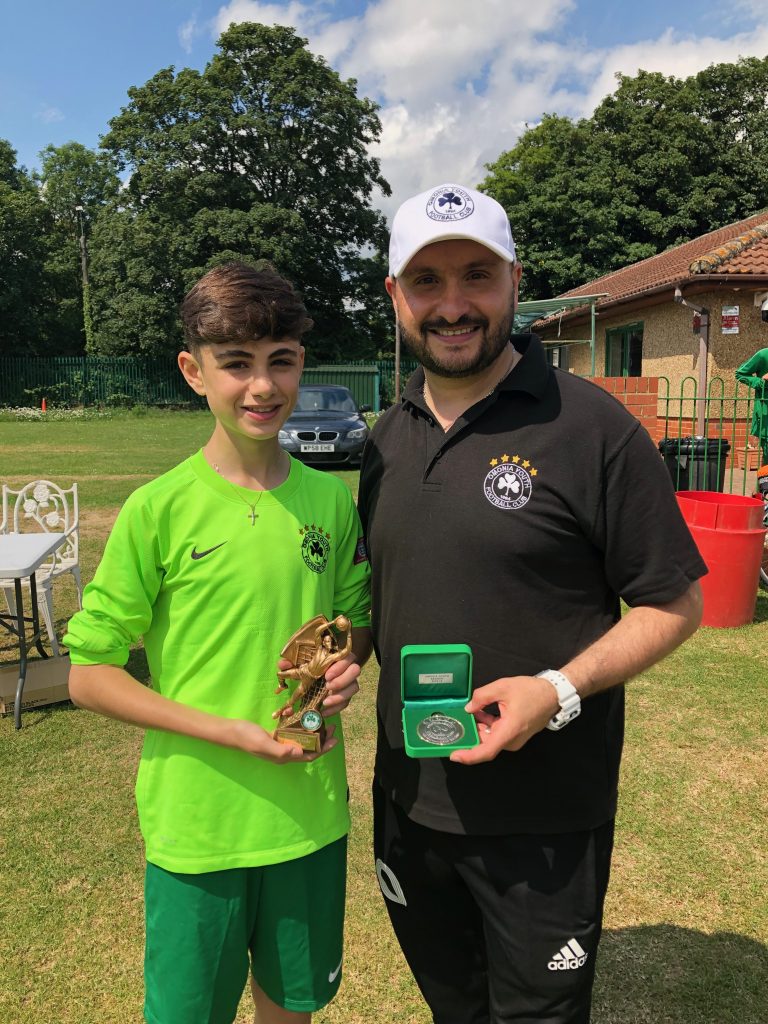 Both these young men started their Omonia Youth FC journey when they were five years old, at the club’s development centre. Between them they have played hundreds of games for the club and this season their journey reached it’s end as they both played their last game for the Under 18 Green.

Thirteen. Years. Incredible loyalty with both young men proud to have worn our green shirt. A very deserving award to both.

Kyri’s love for the club is unconditional and over many years he has done everything in his power to support and ensure the club is the best it can be. The first to help and the last to leave when the clear up begins!

Over many years in various roles, the institutional memory he has brought to the committee as Vice-Chair has been invaluable.

His advice is golden and his role in the decision making process has been vital. While arguments may rage around him, his skill in diplomacy and his sincere manner means he is listened to and rusted implicitly.

As a coach he is knowledgeable but most importantly he sincerely cares for the young people he is working with.

Kyri has wonderful ability to reconcile differences and seeing things from an alternative viewpoint and for all he is simply a man of generosity, genuine warmth and wisdom. 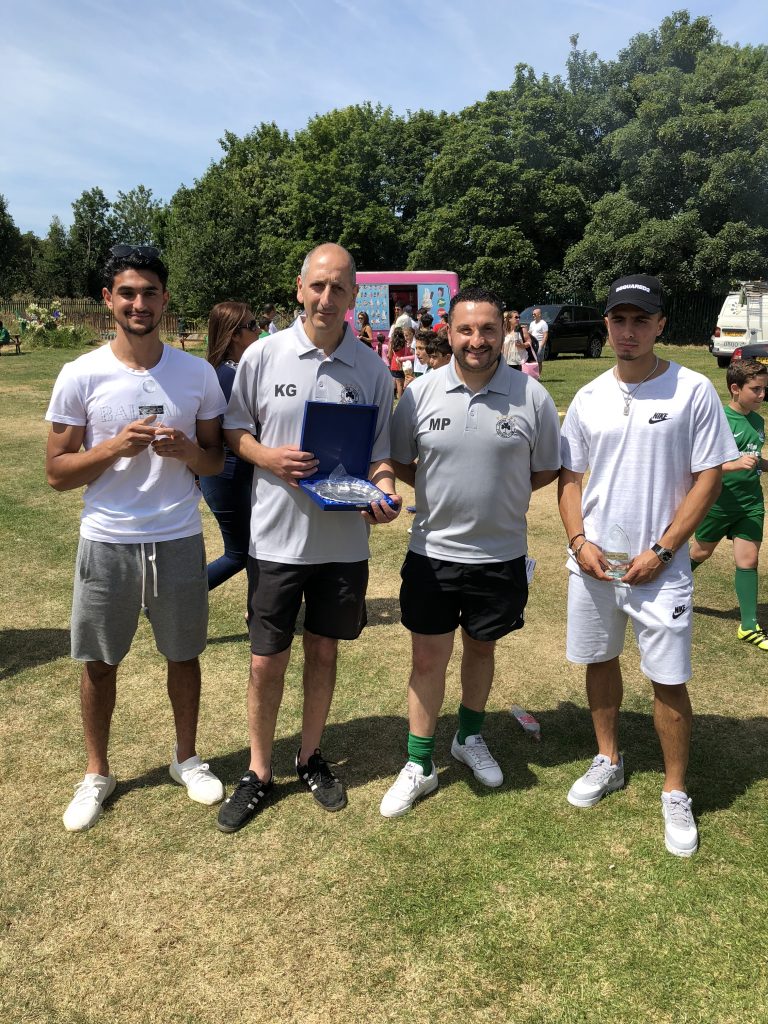 For over a decade Charlie has served the club in various roles, not least as Treasurer for a number of years. Charlie’s enthusiasm and love for the club is well known and anyone who meets and talks to Charlie is immediately won over by his humour and sincerity; Charlie is truly one of the club’s great characters and in receiving the award, Charlie named several stalwarts of the club whose commitment since the club’s inception in 1994, endures to this day. 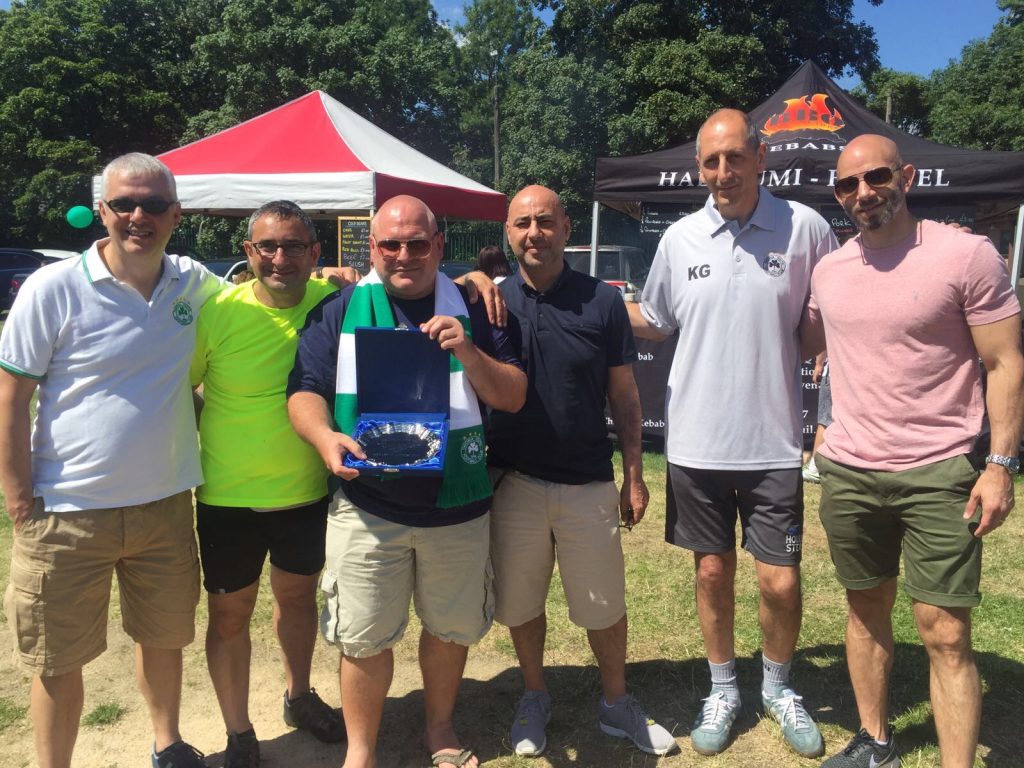 For over 11 years Joe has been a manager, fixture secretary, committee member and trustee of the club. His selfless work for the club in various roles epitomises the community spirit the club and in a fitting end in their final match of their Omonia Youth FC careers, Joe’s U18 team in 2016 won the cup.