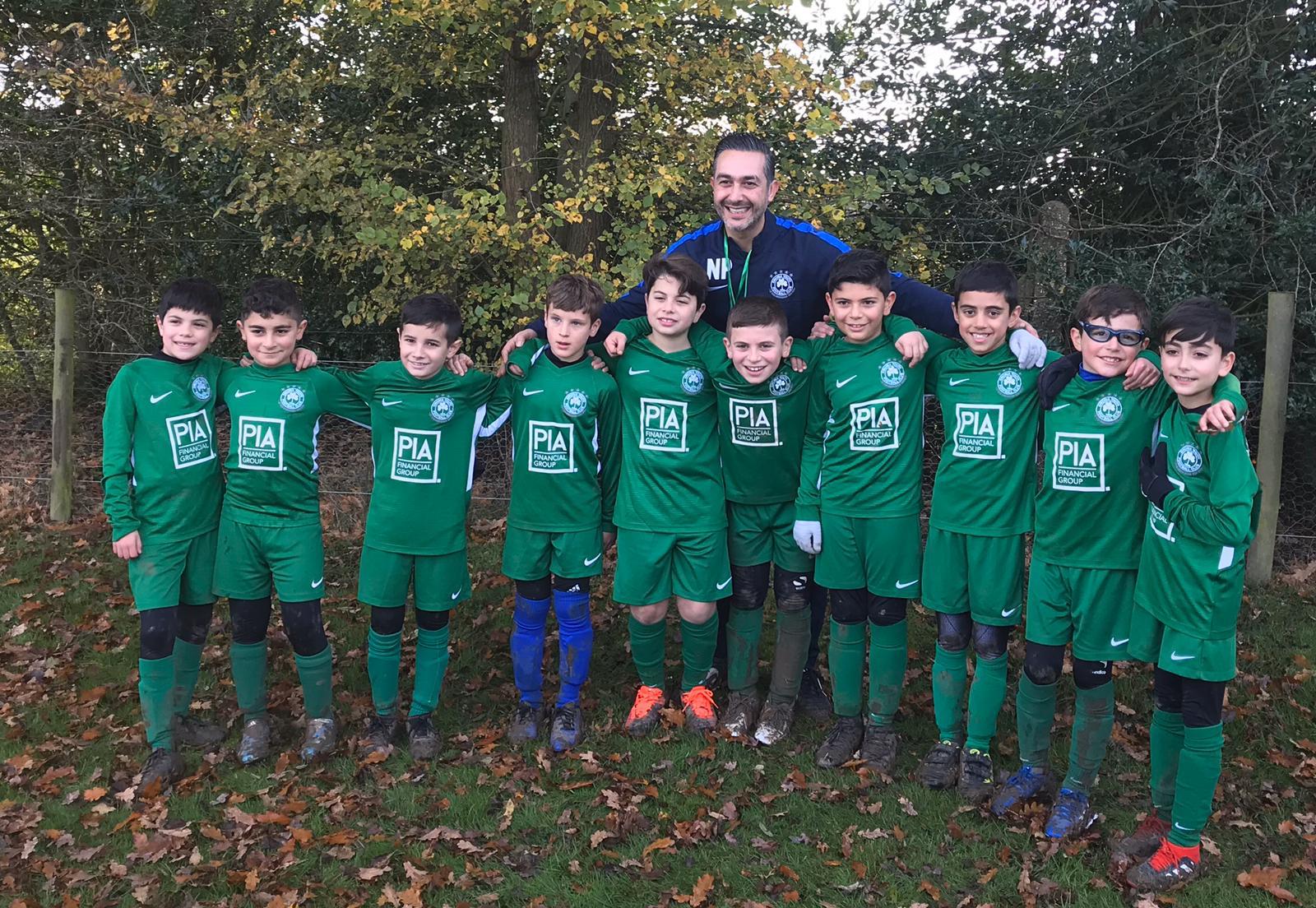 There was a variety of performances and results for the many teams of community grassroots club Omonia Youth FC, sponsored by PIA Financial Group and Philip Ross Solicitors last Sunday as the grassroots youth season approaches its winter break.

Chris and Jimmy Mousicos’ Under 15 Gold put on a dominant performance as they easily outplayed and outscored their opponents in a 10-1 win. Goal scorers were Louis (4), Vansh (3), Liam (2) and goalkeeper Lewie.

By contrast, Mike Koumi and Adam Broomfeld’s Under 12 White put on a disappointing performance against strong oppiosition which ended their unbeaten league run. On a boggy pitch and with a couple of players injured, including their goalkeeper, the Under 12 White conceded four early goals from the opposition’s first four shots. The team failed to fully recover, heads went down, and they eventually lost 8-2. Goals were scored by Harry  and Georgie with Zenon named Man of the Match.

Savva Zavros and David Poncia’s Under 14 Gold were amazing as they gave their opponents a master class in possession and off the ball positioning with the majority of football being played in the opponents half of the pitch. Dedication, desire and commitment throughout led to an 8-1 win. Goals were scored by Ky (2), Kaian, Mustafa, Jamie, Valantis, Leo and Jon. Archie named Man of the Match.

In the Junior League Cup Mario Yiasemi’s Under 13 Gold played a team two Divisions above them and with only 10 players the boys were brilliant. They showed so much heart and fight and were always in front until they eventually went 4-3 down to lose the tie. The boys were very unlucky to lose today but manager Marios was understandably very proud of the team. Demos was Man of the Match with Arda scoring all three of his team’s goals.

Michael Pieri’s Under 15 White again gave themselves too much to do as they allowed their opposition to race into a 3-0 lead. The boys brilliantly pulled it back to 3-3 in the second half and were utterly dominant in the second period but spurned chance after chance to take the lead. The football Gods then punished the Under 15 White in the cruellest way possible as the opposition scored winner with the last kick of the game. Goals were scored by Noel Alen, Kyle Lampompe and Sami Hristov. Kyle and Malekai were named Man of the Match.

Mario Christoforou and Nick Lingis’ Under 15 Green won again to maintain their challenge at the top of the table thanks a 2-0 win. Cameron J and Conor L scored the goals with Joe K and Conor L named Man of the Match.

Chris Gregoriou’s Under 18 White endured a game of two halves. They were losing 3-1 at half time and managed to win the second half 3-1 to make the final score 4-4 thanks to a couple of great goals scored, first by Steven Wright from outside the box what was described by manager Chris as “…probably the best goal I’ve seen in a very long time…” from Man of the Match Chris Yiannitsarou flicking the ball from left foot to head to thigh to right foot and smashing ball into the top corner which was the equalising goal – fantastic stuff! The other goal scorers were Steven Wright (2) and Maleak Minto.

Nick Georgiou and Dino Savva’s Under 18 Gold were 4-3 winners in a very tight game thanks to an overall good team performance with every player doing his part. The score was 3-3 until last five minutes when they managed to score the winning goal. Goals were scored by Styli Chrysostomou, Peter Michael, Rivaldo Dju and Theo Stavrou. Harry Vassiliou and Anthony Gregori named Man of the Match.

Kyri Georgiou’s Under 18 Green suffered a 4-3 defeat. Yiannis Polycarpou (2) and Andreas Georgiou got the goals. Nick Minas was Man of the Match.

Finally Mario Demetriou, Johnny Othona and Elvis Leon’s Under 13 Green lost 9-2 in the League Cup to a well-organised and drilled team who outplayed them in every department. It was a match where plenty of lesson can be learned.