Under 16s through to Cup Final 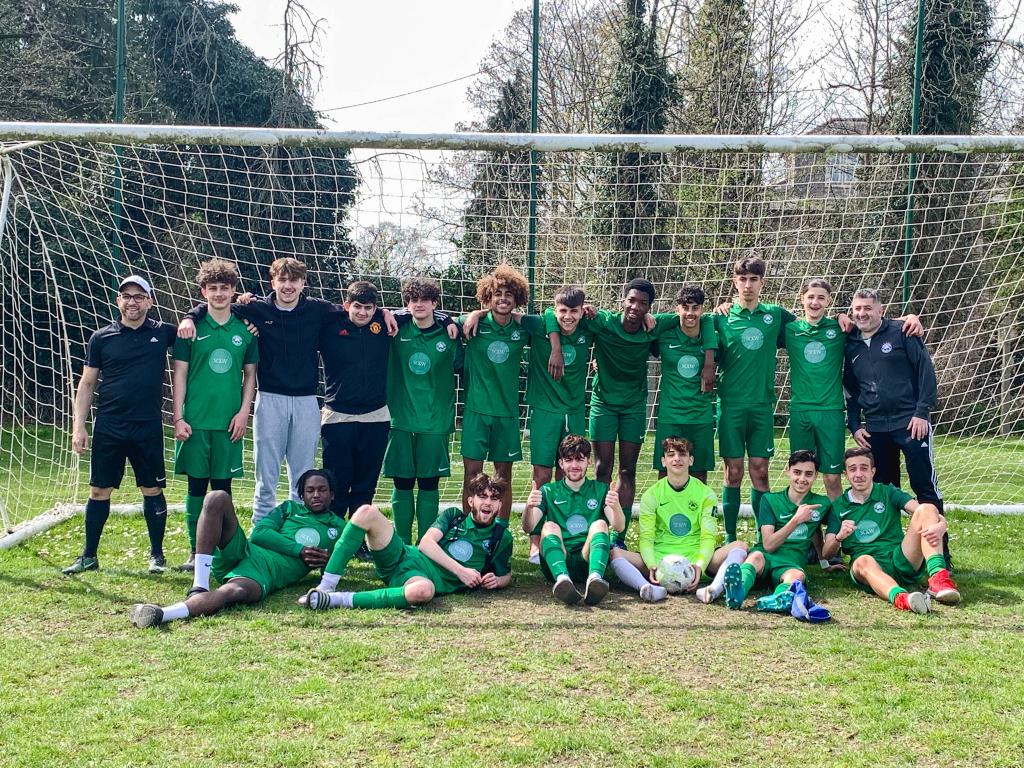 With only 12 players to choose from and three carrying injuries, many of the boys had to play out of their normal positions but due to positional rotation when they were younger it wasn’t a problem and the boys that played out of position were the decisive players on the day! In a tough and evenly contested match, the Under 16 Silver went into half time a goal down after they conceded from the penalty spot. After a good half time talk, it was all Omonia Youth in the second half as the Under 16 Silver took the game to their opponents. A 30 yard thunderbolt from Nonso made it 1-1 and even though the Under 16 Silver had most of the possession and created many chances they couldn’t convert. After losing their striker to injury and with extra-time looming, the prospect of playing two extra periods was daunting. Both teams were suffering from fatigue in extra-time and being a player down due to no fit substitutes. The message to the 10 on the pitch was simple – “…you are 10 minutes from a cup final. Give it everything you’ve got.” And they did. With almost the last kick of the game, Nicola slotted the ball home to take his team into a Cup final. There were fantastic scenes at the end. What a result, what a performance and what determination was shown. Well done to all.

While the Under 16 Silver were celebrating reaching a Cup final, Sophia Karanicholas and Samuel Arthur’s Under 14 Girls suffered the heartbreak of losing on penalties in their cup tie.

Both coaches could not have been prouder of their team as they completely outplayed a team that was finished the season above them in the league, demonstrating not only how far the girls have developed this season but that they are able to compete a division up next season.

After a sluggish first 15 minutes, the Under 14 Girls went 2-0 down but halved the deficit just before half time. Straight from kick-off in the second half, the girls tightened and closed gaps and really pushed back their opponents into their own half. It was incredible to see how well they executed all the things they had reflected on during half time and they were rewarded with the equalising goal. The match went to penalties unfortunately the girls lost 5-4 in the shootout. After the match Sophia said: “…what was most encouraging was the bravery each girl showed to step up and take a penalty as well as the way all the players encouraged their team mates. No heads dropped at the end, which says everything about the performance.” Goals were by Sophia T and Mea B with Amelia named Player of the Match who was outstanding in defence and demonstrated her natural leadership qualities by organising her team mates like a true leader!

Savva Zavros and David Poncia’s Under 16 Gold finished their league campaign going down 3-1 but having achieved their season’s objective which was to stay in the division.  On reflection it was definitely a season that could have been better had they started the year stronger by dropping points to sides they went on to beat later in the season. However, there was lots of improvement throughout the year and both David and Savva are very proud of them all.

Mary Tryphona and Tony Stylianides Under 11 Girls played against each other with both coaches allowing the girls to take charge of proceedings!  The girls chose their positions and sorted themselves into two teams and demonstrated excellent communication skills as well understanding of each other. The match was characterised by brilliant football and most importantly they all shared in goalkeeper duties. The whole squad was the winner as all the girls  played with smiles on their faces enjoying their football. Girls of the Match was awarded to Joanna and Ava.

Myri Demetriou and Kyri Eleftheriou’s Under 13 White won 3-0 away in a game where their style of football dominated. Both coaches were proud of the boys on so many levels. A few were carrying knocks from a tough semi-final cup defeat just two previously Friday but they made themselves available to play to ensure there were enough players. With one player involved who had begun his fast for Ramadan also making himself available, it showed an amazing team mentality which both coaches will cling on to and take forward for the future.

The boys were faced with a constant barrage of long balls and long throws with little intent from the opposition in playing football on the grass. The dry and bobbling dod make it difficult for the Under 13 White to play their free-flowing football but they got to half time scoreless.

The second half started and the Under 13 White started to dominate the ball and possession and they were rewarded with a superb strike that flew into the top corner from Donik. The boys took confidence from this and pressed even harder. The won the ball back high up the pitch, threading through balls for Nicholas to run on to, and making overlapping runs and runs deep from midfield and defence. It’s what was needed in the circumstances and the boys got rewarded with a second goal, a sweet free kick from Nicholas which was thoroughly deserved for him, after being a constant pest to the opposition with his harassing of their defenders, and his pace and trickery on the ball. Momentum was with the Under 13 White now, and the boys got a third after a cross into the box, was controlled by Andre who spun and powered it into the net. They then managed the game very well. It was a great result for the boys. It’s been a long hard season with injuries and illness and absences so it was nice for them to get the result and be reminded of how good they really are. Men of the match were Donik and Tasin.

Kerem Denizer Under 12 Green played out an entertaining 2-2 draw. The boys took the with a fantastic goal by H who is top form at the moment and really pushing himself to be a big part of the team. The second goal came from Man of the Match Leo who was a constant threat, doing everything right. There was great effort at the back from Luca, Hakan, Zac, Anastasi  Kristian all doing an amazing job. New signing Erald has blended well with the group and he ran his socks off.