Under 15 teams lead the way for Omonia Youth FC 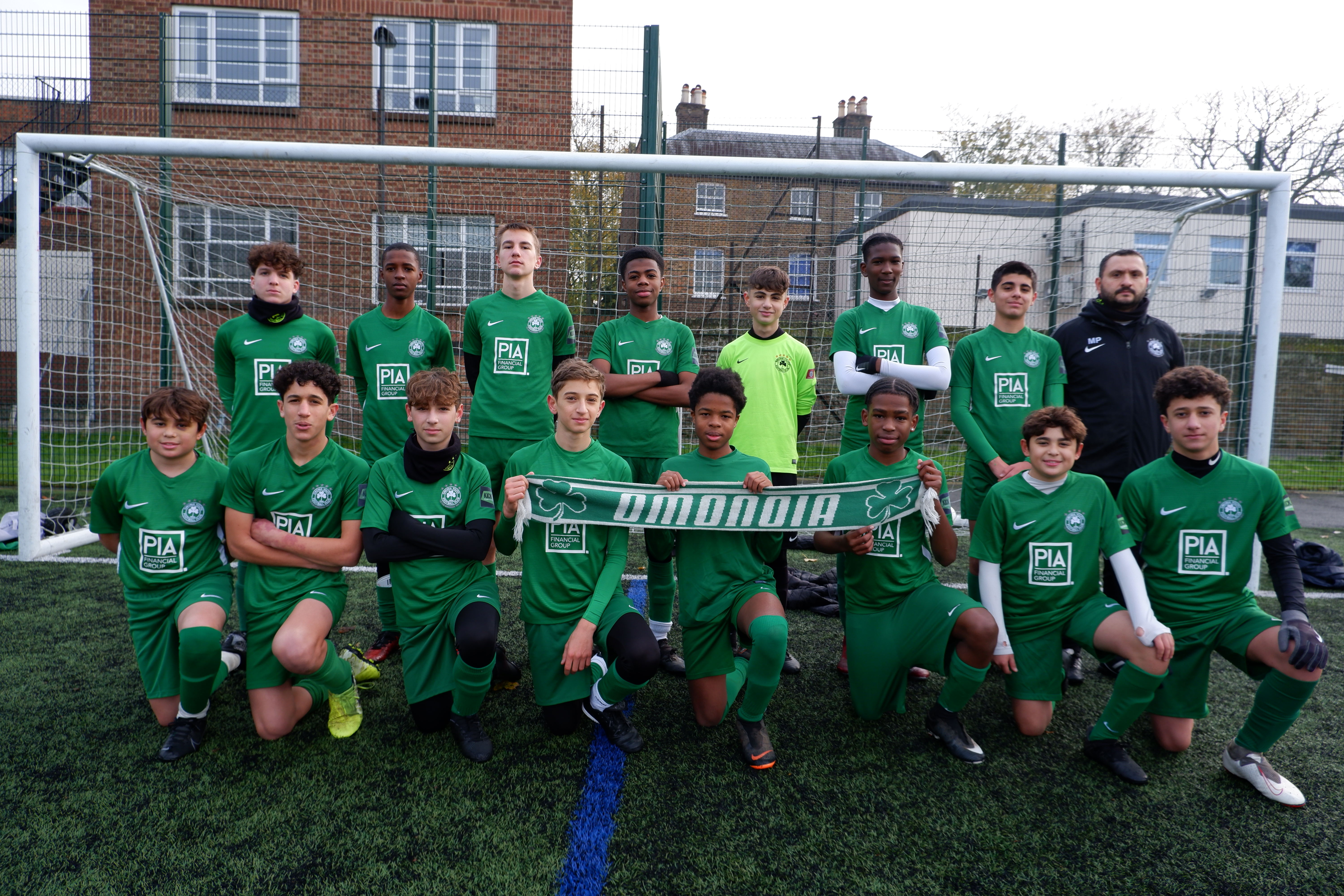 Mario Christoforou and Nick Lingis’ Under 15 Green won their League Cup tie and are through to the last eight. They had to come from behind to win 3-2 with goals from Georgios, Nathan and Joe.

Chris and Jimmy Mousicos’ Under 15 Gold have already made it into the quarter final and last Sunday were in league where a win took them into third place, two points behind the Under 15 Green. Robin got both goals in a 2-0 win.

Michael Pieri’s Under 15 White had a late kick off away at the Hive but put on an outstanding display to beat the current league leaders 2-1. Two fantastically worked goals either side of the only sloppiness at the back all game gave them all three points, Noel Allen finishing off both moves. The boys played their football on the floor and showed the correct spirit and determination to win a tough match. Michael said: “We’ve had a difficult run recently but today it came together. Having quality on the bench helped and I knew they were on it as they had a very positive warm up which set the correct tone. I’m a very proud coach and the long drive home will be accompanied with smiles on happy faces.”

There were several candidates for Man of the Match but Yianni Sophocleous was awarded the hour for a faultless centre half display.

Mario Demetriou, Johnny Othona and Elvis Leon’s Under 13 Green played the league leaders and the boys did themselves proud having played fantastic football today. Coach Mario described it as “…probably the best they have played season.” It was a shame they conceded what turned out to be the winner five minutes from time but there are lots of positives to take from the match.

At the Under 14 Derby at the Radiomarathon Centre in Enfield, an exciting match was decided by the odd goal in five. Savva Zavros and David Poncia’s Under 14 Gold went into the half time break leading 2-0. Adam Demetri and Evagoras Madrides’ Under 14 Silver recovered brilliantly in the second and equalised within 10 minutes in what was a very close and exciting match. In the end it was the Under 14 Gold who out on top. Goals for the Under 14 Gold came from  Max (2) and Kaian with the whole team awarded Man of the Match.

Robert Protei and George Constantinou’s Under 12 Gold put in the performance of the day as they emphatically won 14-1. The boys played some amazing football today with fantastic passing and movement throughout the team. They have struggled against the same opponents in the past but on Sunday it all came together in an eye-catching performance.

Goals were scored by Pablo (7), Anthony (3), Christos (2), Giggis and Joseph. Not surprisingly, the whole team were awarded Man of the Match.

Chris Gregoriou’s Under 18 White played a team two divisions above them and even though they only had 10 men took them all the way in an exciting cup tie. In the end they lost 4-3 but the boys played really well making Chris a very proud manager. Goals were scored by Nick Gregoriou, Chris Yiannitsarou and Man of the Match Steven Wright who put on a proper captains performance and kept the boys going until the very end.

Nick Georgiou and Dino Savva’s Under 18 Gold won at home 4-0. The boys were fantastic and played their hearts. The defence was singled out as being “…exceptional…” considering some of the boys were playing in these positions for the first time. An overall great performance with superb goals scored. Scorers were Peter Michael, Michael Vassiliou, Nick Apostolou and Louie Capsalis. Joint Man of the Match was awarded to Stefanos Kizas and Anthony Gregori.

Mike Koumi and Adam Broomfeld’s Under 12 White got back to winning ways with a 4-0 win. It was strong performance against a good opponent. Hard work gave them the boys the right to play some flowing attacking football from front to back. Some great goals were scored including a cracker from 25 yards into the top corner from Man of the Match Georgie who scored twice. Other goals came via an own goal and Andrew.

Finally, Kyri Georgiou’s Under 18 Green faced an opponent a division higher and by half time were 2-0 down . A nice goal by Solon got them back in the game but unfortunately he then got his marching orders which left his team playing with ten men for most of the second half. Grit, guts and determination was needed and the boys managed to get an equaliser from George Ioannou to take it to extra time. Shortly into the first period of extra time Rico Charalambous scored a lovely goal for to give the Under 18 Green the lead. With minutes to go and the opposition pressing for an equaliser, Antonio Panayiotou made it 4-2 to seal the victory. A fantastic display and into the next round of the cup. Man of the Match was awarded to centre half Andreas Georgiou whose performance was described by watching Trustees Chairman Andy Charalambous as “…a chip off the old block!” 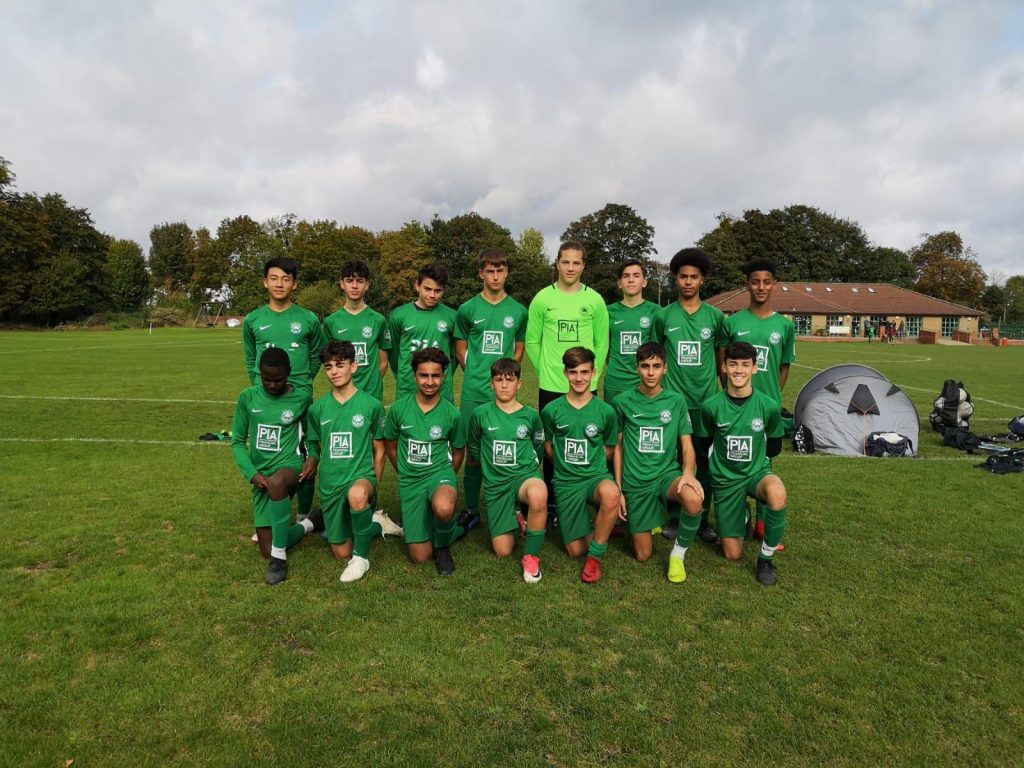