It was a day to celebrate last Sunday as community grassroots club Omonia Youth FC, sponsored by PIA Financial Group and Philip Ross Solicitors saw one its teams win their Middlesex County Cup semi-final to take their place in the final of the prestigious competition. There were plenty of other good performances and results but this was a significant one, especially coming during the club’s 25 Year Anniversary.

On a wet and windy day, Under 14 Green coaching team were rightly proud at the final whistle as they celebrated with parents and their players after such a fantastic result. Both Nick Lingis and Mario Christoforou could not pick out a Man of the Match as this was truly a team effort. The match was played at Middlesex FA headquarters at Rectory Park and as expected, it was a tough match but the Under 14 Green were outstanding from first minute to last as they eventually ran out 3-1 winners. Goals were scored Nathan L (2) and Joe K to seal a County Cup Final. The final will be played on 31 March. After a mentally exhausting match Nick only had a few words to say about his team and the match and he summed it up nicely: “It was a great day, the boys were superb and they deserved their win.” Further details about the final including the venue will be published here once these are confirmed. It is proving to be quite a season for the Under 14 age group with the Under 14 Silver already securing their divisional title, the Under 14 White in a good position to get promotion and the Under 14 Gold in the Challenge Cup semi-final.

Chris and jimmy Mousicos Under 14 Gold were also winners on Sunday, earning three league points after winning 4-1. Louis Georgiou (2), Rayen Haboubi and Thomas Mansaray got the goals with Louis Georgiou and Jawdan Miah named Man of the Match.

Meanwhile Michael Pieri’s Under 14 White put on an outstanding display in the Spring Plate playing a team a division higher. The match was played on a beautiful pitch but the wet and windy conditions made it very difficult for both teams. For all their dominance the under 14 White could not get the breakthrough their good football deserved and they suffered a sucker punch as they went 1-0 against the run of play. They quickly got back on level terms with a fine finish from Noel Allen. Chances went begging and incessant pressure did not yield a winning goal. Man of the Match was Kyle Ellis who was put in a faultless display at centre half.

Elia Constanti, Panos Papa-Michael and Andy Michael’s Under 15 Golds continued their good form with a 6-1 victory. A good shape throughout the game was key to the consistency of play which was very pleasing. This can be difficult to maintain when completely dominating but the boys were very disciplined and kept the play more simple rather than spectacular. Goals from Andreas Polycarpou (2), Youseff Habibi (2), Luca Paone-Michael and Tom Gibb with Youseff Habibi named Man of the Match for an all action display

Nick Georgiou and Dino’s Under 16 White were emphatic winners of their league match winning 8-1. In a strong performance the boys dominated the game from beginning to end and pleasingly kept their shape and formation even when the score was big and they managed to keep the ball on the ground and play some lovely football. Goals were scored by Apostolos Tziatzios (3), Theo Stavrou (2), Louie Capsalis, Styli Chrysostomou and a own goal after a deflected shot from Lyon Theocharous. Man of the Match was Louie Capsalis.

Mario Demetriou, Johnny Othona and Elvis Leon’s Under 12 Green showed amazing character playing with only 9 players and the whole of the second half with 8 to come away with a 4-3 win.

These boys never give up and have a fantastic togetherness. Goals from Luca (2), Alex and Zach with Andreas named Man of the Match.

Marios Yiasemi’s Under 12 Gold won away to the current league leaders, winning impressively 5-3. The boys were amazing and could have won by a bigger margin. Goals scored by Man of the Match Arda (2), Dhiren (2) and Logan.

The club this year celebrates its 25 year Anniversary and will be hosting a celebration event at the end of the season. Should you wish to donate auction or raffle prizes or want to place an advert in the commemorative brochure please contact the club. Furthermore, should you feel enthused and want to know more about Omonia Youth FC, you can contact the club at omoniayouthfootballclub@hotmail.com, via the contact page on the club’s website www.omoniayouthfc.com as well as following the club on twitter @OmoniaYouthFC and Instagram @omoniayouthfc1994. 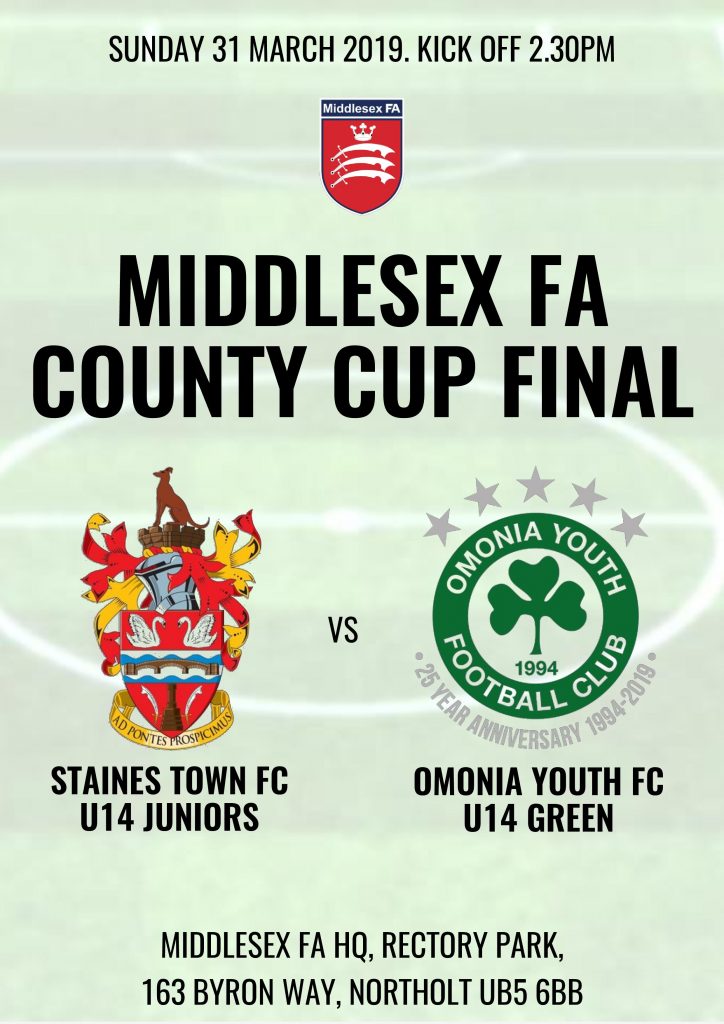