Under 13 White are Champions! 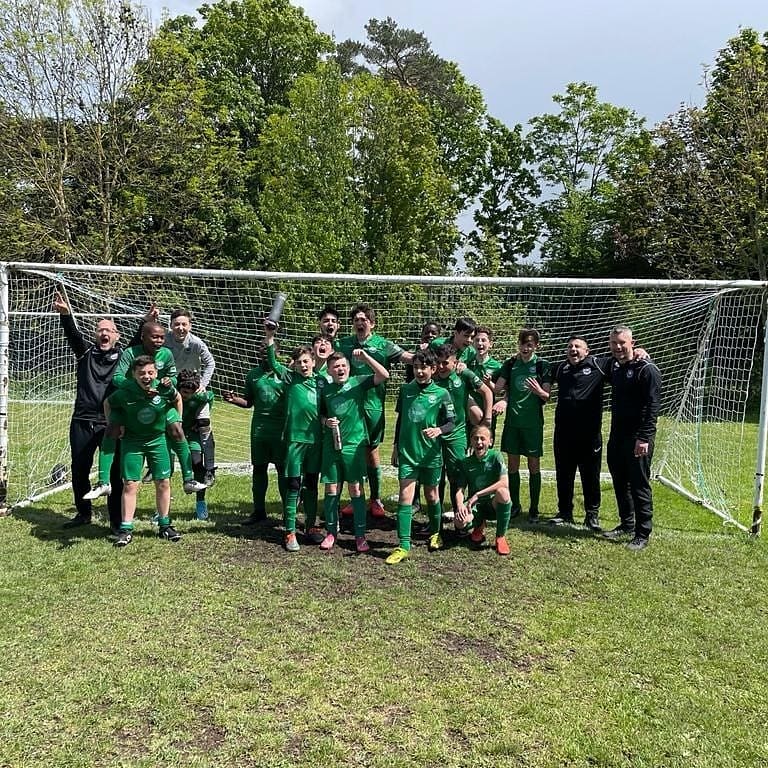 It was a monumental day for one of our team last week as victory for the Under 13 White team secured not only three points but the divisional championship. A wonderful reward for the coaches, parents and of course the players.

The team who are coached by Mike Koumi, Adam Broomfield and Pany Panayiotou got the three points they needed to seal the title with two games left to play. In a very nervy game, which had so much riding on it, saw the boys do everything but play their usual free flowing football. However, their class told in the end and two outstanding individual goals, one a volley from outside the box saw the Under 13 White go 2-0 up. The second half was a scrappy affair but boys stuck at it and sealed the win, eventually running out 4-1 winners. The celebrations at full time were great with parents, supporters and friends joining the coaches and players. Plenty of deserved plaudits were bestowed on the players and lots of photos taken.

After their match was over on the adjacent pitch, the Under 16 White gave the Under 13 White a guard of honour as they applauded and congratulated the younger players on their brilliant achievement. This was another example that while there are many teams, Omonia Youth FC is indeed one club. William got two goals with Davide and Thomas getting one each. Man of the Match went to Thomas and Alexie. Huge congratulations and well done to Mike, Adam, Pany and of course the players.

Michael Pieri’s Under 16 White lost a keenly contested match 4-2 even though they took the lead in the first half and dominated the first period, conceding a late goal before half time swung momentum to their opponents who took the lead early in the second half. The Under 16 White equalised but a mistake in midfield gifted the opponents their third. Chasing the game, the Under 16 White conceded a fourth. The opening goal was scored by Noel, his fourth in three games while the second was an own goal as a result of a wonderful set piece from Yianni. Man of the Match was awarded by the team to Andreas Stavrou and Sami Hristov for an outstanding centre half display.

Tas Georgiou’s Under U14 Green lost 6-2 and despite another defeat there were many encouraging signs in the team’s attacking play. Overall, they are much improved with a good team shape as the boys fought back from 3-0 to 3-2 down just after half time with goals from Jamie Gordon. The coaches are happy with the team spirit and are hoping for more positivity in their last league game against the same opponents next Sunday. Man of the Match was Ollie Metcalfe.

Both the Under 16 White and the Under 14 Green matches were refereed by Nick Nicolaou and both coaching teams praised the referee for his excellent performance. Nick showed good control as allowed the game to flow while communicating effectively with players and managers at all times.

After a heavy mid-week loss having only had nine players, Nick Georgiou’s Under 18 Gold on Sunday had to play a double-header with only eight players. A brave performance by the boys saw them lose the first match 2-1 with Michael Vassiliou scoring. In the second match they lost 5-2 with Andreas Georgiou and Jack Nash scoring lovely goals. In both matches the boys showed amazing spirit from who despite being three players short never gave up, kept their heads up and battled through to the end. Nick was a very proud coach as he said: “The boys earned the highest respect from the opposition players, managers and parents for what they did today so Man of the Match for both games goes to all those eight players!”

The Under 15 Derby between Savva Zavros and David Poncia’s Under 15 Gold and Adam Demetri and Evagoras Mandrides’ Under 15 Silver was a great to watch with the Silver claiming the win thanks to three unanswered goals.

Zeno Vryonides and Vas Simou’s Under 13 Green played their match with a full-strength team since lockdown restrictions were lifted, and it resulted in a great performance, winning the match 9-4. Being able to rest and rotate player positions meant all players came off the pitch happy, knowing they had played football the way they wanted. The boys controlled most of the game, learned from their mistakes as they showed effort and support for each other for a well-deserved win.

Myri Demetriou and Kyri Eleftheriou’s Under 12 White put on another dominant performance as they won 6-0. Against a tough opponent, the boys needed to be sharp from the start to get their rewards. By winning their individual battles and spreading the ball quickly, their transitional play, is improving game to game which is very pleasing. Every player made a huge contribution, front to back. Leo terrorised their opponents by netting four goals, and could have had more but for some great goalkeeping. One of his goals a very cheeky scooped finished after facing up the goalkeeper one on one was the highlight! Kleanthis probably played his best game for the team and got his reward with a cool finish. Charlie also scored after a great penetrating run through the middle. Any one of the boys could have been man of the match as it needed and got a team effort. One more game to go after a long hard season, that sees them breathing down the necks of the opposition at the top of the table. Both Myri and Kyri are understandably very proud of their team.

Man of the Match was given to Charlie who was sharp on the right wing. He worked hard defensively but was so direct in attack and unselfish with his play, helping create so many opportunities and finally after a bit of a drought getting a well-deserved goal with a cool finish.

Mary Tryphona’s Under 11 White Girls are showing improvement week by week. Mahdi and Isabella in goal were amazing. The girls never gave up and they battled for each ball with goals being scored in every game. Mary said: “As the coach I am very proud of how the team is progressing. I must also say that the parents are a great support and they understand we have a big squad and rotating is a must, so thanks.”

Abdullai Adejumo’s under 11 Green Girls also had a brilliant game and there was a great turnout despite the threat of storms. The girls were up against a really strong side today but dealt with their fairly relentless attacks and had some success from a few counter attacks of their own with the end of the match a real nail biter! The girls awareness of space and positioning improves each week with decision making an area needed to develop. Abdullai said: “The energy the girls bring from the start of each game never ceases to amaze me as does their positivity. Most importantly, the girls all enjoyed themselves.”

The Men’s team is sponsored by Crown Mobile Tyres, Athletic Development Club, The Master Locksmith, CJAZ Consulting and RAMEK asset management had another tough game in their inaugural season in adult football. Earlier in the season the lost to the same opponents 7-2, but Sunday was their day as they beat Cinar 6-2. The Men’s Team started quickly, putting their opponents on the back foot, creating many chances, but the first goal was from a corner headed in by Hadi. The second half started and before the opposition could blink Andreas scored to make it 2-0. The team were now comfortable and playing some great football. Nick scored a penalty with Andreas adding another two before Steven finished the day with the best goal of the day.

Man of the Match was given to Dave Huntingford who put in another fantastic performance playing as a sweeper keeper and was solid in his handling too! The win moves the into third place in the league. 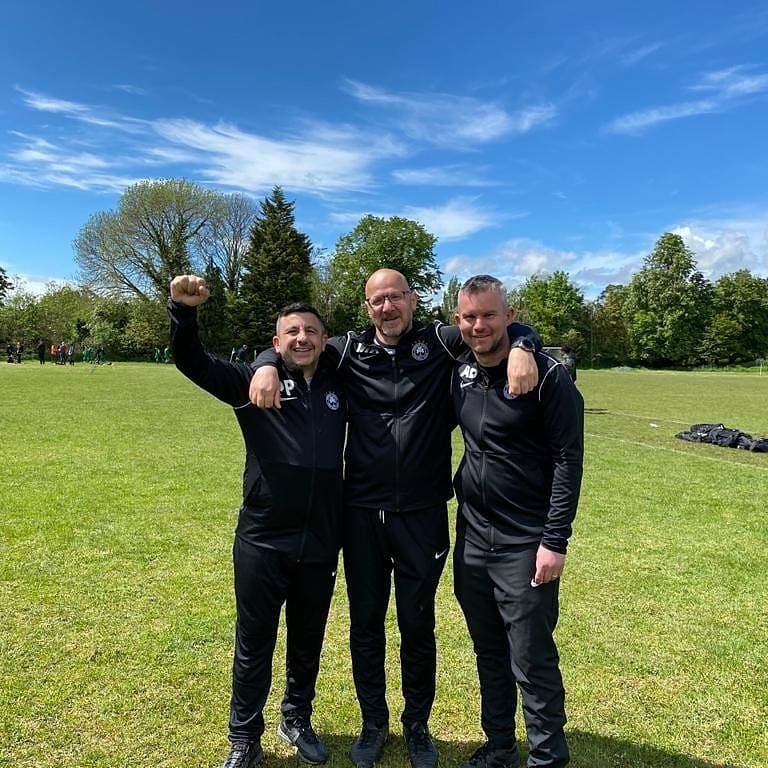