Under 13 Silver are unbeaten champions 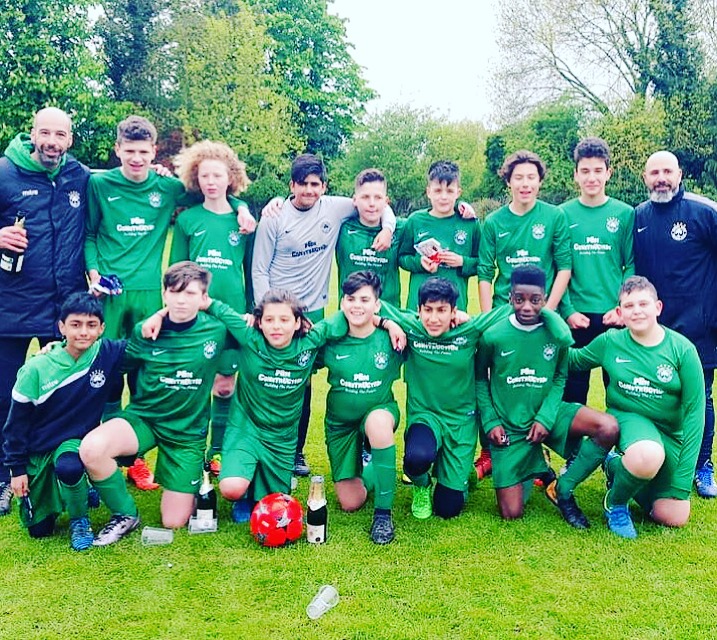 Community football club Omonia Youth FC has reason to celebrate last Sunday as one of their teams completed an unbeaten league campaign to clinch promotion as champions of their division.

George Sammoutis and Harry Theodorou’s Under 13 Silver won their final league game of a stunning season 8-1. Goals were scored by Mehmet (2), Joe, Vickto, Aryan, Ben, Oscar and Jakub. Justiufiably, the whole team were named Man of the Match.

The win meant the team completed an unbeaten league campaign winning 15 of their 18 matches and drawing the other 3. The team scored an incredible 114 goals and only conceded 24. Well done to managers George, Harry, the players and their parents on a magnificent achievement.

In the Mid Herts Premier League, the Under 15 Green, a day after their cup final success had a difficult game against their fifth place opponents. Unsurprisingly the boys started slow still feeling the effects of the previous day’s game. The teams went into half time goalless but just like the cup final, the Under 15 Green stepped it up in the second half and scored early to settle some nerves; Barsa Mirtahmasebi heading in from a corner. With the team were now settled they started to control the game and were awarded a penalty when Tobenna Abana was brought down in the box which he duly converted. Further goals from Toby and a fine finish from George Stasi completed the scoring in a 4-1 victory. It was a well-earned victory capping off a great weekend for the team. Man of the Match was Barsa Mirtahmasebi.

Nick Georgiou and Kenny Gregori’s Under 15 White lost their league match 5-0. The boys tried their best and worked hard against the division leaders. Despite the final score the boys can hold their head up high and be proud of how they played. Man of the Match was Alex Pike.

Michael Pieri’s Under 13 White threw away a half time lead as they lost 6-4. Having gone 2-0 up and playing well, conceding a goal on the stroke of half time gave their opponents hope for the second half. Poor decision making by the Under 13 White saw them conded five in the second half even though they themselves scored two. Goal scorers were Santino Raia, Eray (2) and Tana. Man of the Match was the defence who despite the team conceding six goals did what was asked of them.

Nick Zimaras’ Under 18 White also had a second half to forget as they lost 6-2. Goals from Charlie and Austin with Joe Cannon named Man of the Match.

In their double header, Kyri Haili and Mike Petrou’s promotion chasing Under 14 White took four points from a possible six as they drew the first game 0-0 but won the second convincingly 4-0.

Goals were scored by Louis Petrou (2), Hao Xin and Alex T with David Preece named Man of the Match.