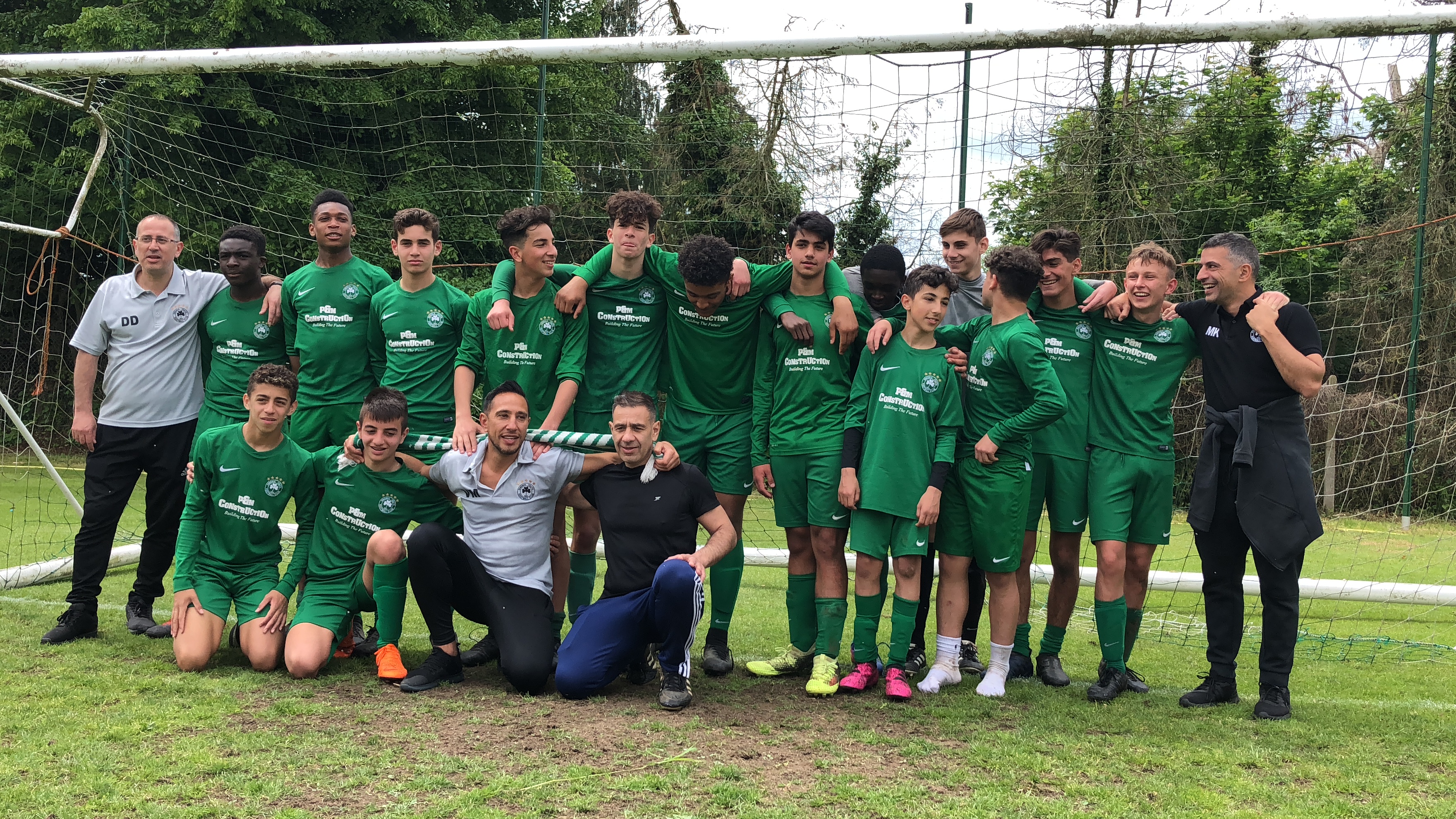 With the season drawing to a close, many teams from community football club Omonia Youth FC, sponsored by P&M Construction UK Ltd, had plenty riding on their final outing of the season, not least the U18 White, Under 15 Green, U14 White and U12 Green. All four teams had crucial matches with either a trophy at stake or promotion, and all four teams excelled in what proved to be a seminal day for the club.

Nick Zimaras’ Under 18 White were playing what could be their final match in the green of Omonia Youth as they stepped out in bright sunshine for the Spring Plate Cup Final against Harvesters East.

Having narrowly lost 3-2 to the same opponents in the group stage, the Under 18 White knew this was going to be a hard game and it certainly lived up to expectations. With a sizeable crowd in attendance and plenty of Omonia Youth supporters to cheer the team on, the game started at a fast pace and within a minute Harvesters East were 1-0 up. Kicking uphill in the first half, the U18 White picked themselves up quickly and within two minutes were level; Rosley using his pace, skill, power and above all determination to go past three players and score after his initial effort was saved by the goalkeeper. It was also Rosley’s 20th goal of a productive season.

The goal settled the team and as the half progressed they started to impose themselves and went close with Aaron heading over following a cross from Jordan. Charlie and Hamza started to get their foot on the ball in midfield but Harvesters looked dangerous from the long ball and Alexander and Cem had to be alert at all times. At half time the score remained 1-1 and Cem replaced Joe Cannon in goal as agreed before the game.

Within a minute of the restart, another excellent delivery by Charlie found Jacob who scored with a fine left footed volley to put the Under 18 White 2-1 up. Even though Harvesters pressed for the equaliser, it was Omonia Youth who continued to have the majority of the quality possession and it was no surprise when Rafael, on as second half substitute, directed a superb half volley into the left-hand corner of the net to make it 3-1. Harvesters did pull a goal back with a firm header from a free kick but the Under 18 White held on comfortably in the end to record their fourth victory in this competition in the last five years. Man of the Match was awarded to Toye whose calm presence at centre half in the second period settled any anxiety. Predictably, the final whistle sparked wild celebrations as fans stormed the pitch to celebrate with the team. Congratulations to the team and to manager Nick Zimaras.

In league action, Kyri Haili and Mike Petrou’s Under 14 White secured promotion thanks to a 5-0 win to complete an unbeaten 2018. The boys were focused and in control throughout the game. Well done to all. It is huge achievement for the boys their parents and both Kyri and Mike. Goals were scored by David Preece (2), Louis Petrou (2) and Matthew Jobson with Eden Zadka named Man of the Match. Stel Loizou and Omi Omirou’s Under 12 Green knew going into the last match of the season that only opnly a win would guarantee promotion and the division title. There was to be no dramas as they comfortably won 6-0. Goals were scored by Jamal M who finished the season with an incredible 49 goals, Leo, Zach and Emilio. Congratulations to the team and all involved.

The second half was an intense encounter with Under 15 Green coming under pressure against a Stevenage team that consistently played the long ball to their front line. After having one penalty appeal turned down, the Under 15 Green got the chance to open the scoring after Toby Abana was brought down in the penalty area and he expertly dispatched the resulting penalty. With nine minutes left Stevenage scored twice and even though the Under 15 Green created two golden chances to equalise, it was not to be and they lost 2-1. Man of the Match was Barsa Mirtahmasebi and while there was understandable disappointment among the squad, the bigger game and the bigger prize was less than 24 hours away. Renewed focus was therefore needed.

The Under 15 Green knew that only a victory would secure the league title in a division playing against clubs that are semi-professional. The coaching staff of Varney Michael, Mario Kleopa, Neo Petrides and Dean Dionisiou said what they had to say and the message was not to dwell on the previous day’s defeat. The final instructions centred on the need for the team to be true to themselves, to play their football and to leave the pitch without any regrets – the title was on line.

The Under 15 Green started the game well and created good scoring chances but found themselves 1-0 down when a defensive mix up let in Hares to score the simplest of goals. The Under 15 Green were trying to force the play instead of playing the football that they had become accustomed to throughout the season. An inexplicable passage of play saw their opponents double their lead with five minutes of the first half remaining. Was the title slipping away?

Many teams would have dropped their heads and their level but this is a resilient and tenacious group of young footballers. Tobenna Abana converted via an indirect free-kick and suddenly there was a vigour and excitement about the Under 15 Greens. With two minutes left of the half Mikey Dionisiou equalised after sneaking in at the back post to head home the equaliser. 2-2 at half time and never has a half time team talk been so important.

The boys clearly took on their instructions and within ten minutes of the restart George Stasi scored to put Omonia 3-2 up. What a turnaround 15 minutes either side of the interval with the Under 15 Green having recovered from a two goal deficit to lead. A relentless intensity and football of a high quality followed which their opposition could not cope with. Tobenna Abana scored his second after a fine run and he then went on to complete his hat trick. The title was within sight but the boys did not let up. The sixth and the best goal of the game came after a brilliant flowing move from the defence through to midfield where George Stasi set up Tobenna Abana to finish first time, scoring his fourth goal of the game to make it 6-2. There was still time to play but the title party was starting on the side-lines. Hares pulled a goal back but the final goal was scored by Nezehna Erhabor to make it 7-3.

Those of a certain vintage will recall in the annals of football history this is a noted score line and so it will be for Omonia Youth Under 15 Green as the three points secured the Mid Herts Premier Division title – the are the champions! Wild celebrations ensued and deservedly so. A season which started in September has yielded a brilliant Cup and League Double playing exciting football.

Dean summed up the feelings of the squad and the coaching staff as he said: “Today will live long in the memory of the boys. They truly deserve all the accolades they get, especially coping with incredible pressure in the last few weeks of the season. This is a culmination of not just this season but ten years of football development as most of the boys have been together since the age of 5. The bond that has been formed is special and we hope we have helped raise the profile of this wonderful community football club where eternal friendship and memories have been made.”

As the day drew to a close news broke of another trophy being won as the club’s Under 13 Gold won the London Colney 6-a-side tournament. They were undefeated throughout and conceded zero goals. What an incredible and successful day this had turned out to be and one which the club will not forget quickly.