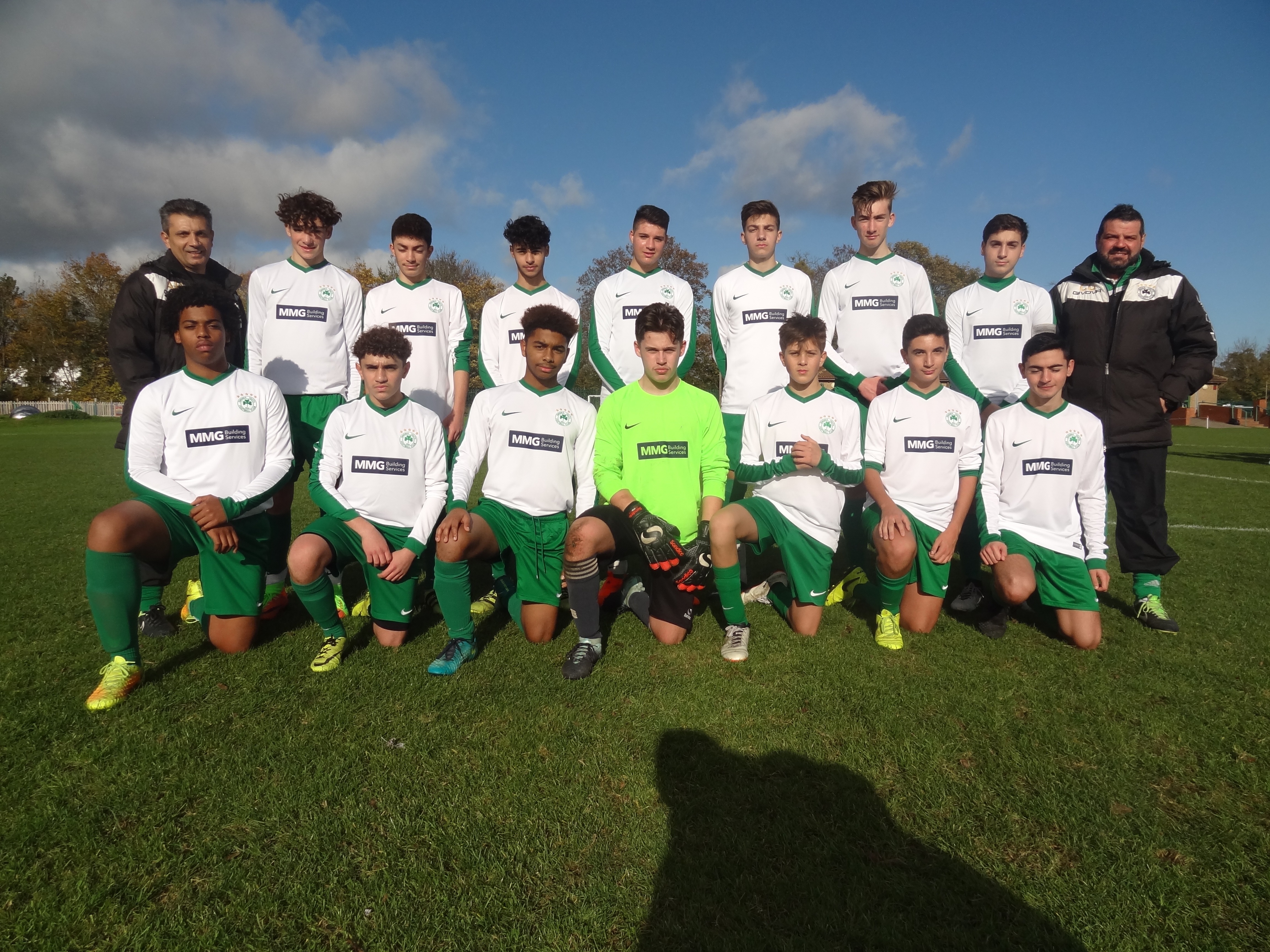 The mid-season Spring Cup competitions offers an opportunity for silverware for many of the teams of community football club Omonia Youth FC, sponsored by P&M Construction UK Ltd.

In the Under 12 Spring Cup, Savvas Zavros Under 12 Gold got a 1-1 draw in their group game in a good all round performance. What was significant was the improvement the team showed after losing 7-3 to the same opponent earlier in the season. Leo Capsalis scored the only goal with Callum Howley named Man of the Match.

Also in the Spring Cup, Omi Omirou’s Under 12 Green won their group fixture 4-1, leaving them nicely placed in the table. Goals were scored by Stef Papamichael (2), Billy O’Sullivan and Leo Ioannou. William G was named Man of the Match.

In the Under 14 Spring Plate, Michael Petrou and Kyri Haili’s  Under 14 White also won their tie 4-1. Coach Kyri Haili commented that it was “…a fantastic performance from all team members. The boys showed good character and great discipline. The boys went 1-0 but got one back just before half time with a thirty yard shot from Adam Curran that lobbed the keeper. Adam also went on to score another. Matthew Jobson and Tyler got the other two for a satisfying and deserved win.

In the Under 16 Quarter Final, Andy Kyriacou and Chris Gregoriou’s Under 16 White were unfortunate to taste defeat, losing 2-1. The boys started the game with some great football taking the game to the opposition. 15 minutes into the second half the udner 16 White had a disallowed goal but they did manage to equalise with Michael chasing and forcing the defender into a mistake and then rounding the goalkeeper to slot home taking the game into extra time. The game looked to be heading to penalties when the Under 16 White were caught out by a counter attack in the dying seconds to lose 2-1 after extra time. Michael Patsias got the goal with Liam Togher named Man of Match who manager Chris described as “…a powerhouse performance in midfield.”

In league action, Nick Zimaras’ Under 18 White lost 5-4 away to their second placed with the score line only telling half the story.  The Whites took a two goal lead early in first half, only to be pegged back to 2-2 through two set pieces. The Under 18 White captain, Cem Alsac, was sent off for a professional foul and from the resulting free kick the opposition scored to go 3-2 up and then added another set piece goal to extend their lead. The second half showed what determination and character the Under 18 White boys have. They pulled the deficit back to 4-3 with a superb finish from Charlie following his timely run through the centre. The boys then got the equaliser through a penalty, converted by Charlie for his hat trick. However with 5 minutes left the White goalie hesitated to come out to claim the ball and they bundled in the winner.

Manager Nick commented at the end of the match that “…although it was a disappointing result, I couldn’t have asked for any more from my team. I had only 11 fit players, a makeshift goalie, both centre backs off the pitch and two of my best players injured or ill today. If we carry on that level commitment into the Spring Cup we can get something out of this season.”

Goals were scored from Charlie Constanti (3) and Aaron Arnold with Charlie also named Man of the Match.

Nick Georgiou and Kenny Gregori’s Under 15 White lost 4-1 away to a team battling for the title but there were some good performances and the team never gave up had some chances just couldn’t put them away . Man of the Match was Ayrton.

In the Mid Herts Premier League the Under 15 Green continued their excellent form with a 4-3 win away from home which was described by coach Dean Dionisiou as “…an entertaining game not for the faint hearted.”

Theor opponents are challenging for the Mid Herts title and although the Under 15 Green should have been at least a couple of goals up, went behind after a defensive mix-up. Omonia equalised with a fine header from Toby Abana and despite dominating the first half Omonia found themselves 3-1 down. This was all to change in the second half as two quick goals in the first six minutes from George Stasi and Mikey Dionisiou made it 3-3. With minutes remaining George Stasi scored the winner with an excellent header after some brilliant midfield build up play. Goals were scored by George Stasi (2), Tobenna Abana and Mikey Dionisiou. Man of the Match was Clinton Beokojie.

Demi Shiamishis Under 14 Green were defeated for the fist time in 2018 after two mistakes gifted two goals to their opposition as they went down 2-1. Scorer was Syjil Laryea with Nicolas Shiamishis named Man of the Match.

Finally, Michael Pieri’s Under 13 White were back in league action won their match 3-1. The boys had to come back from being a goal down at half time to eventually run out 3-1 winners. Michael said: “it was an excellent second half performance and once the boys found their shooting range, it was a case of when they would score not if. Well done to all and especially Dion who scored a great goal on his debut. Godwin scored a stunning goal from the edge of the box after turning the defender inside out and Santino Raia scored the third with a poachers effort after good build up play.”

Man of the Match was chosen by the team who chose Dion and Yianni Sophocleous.