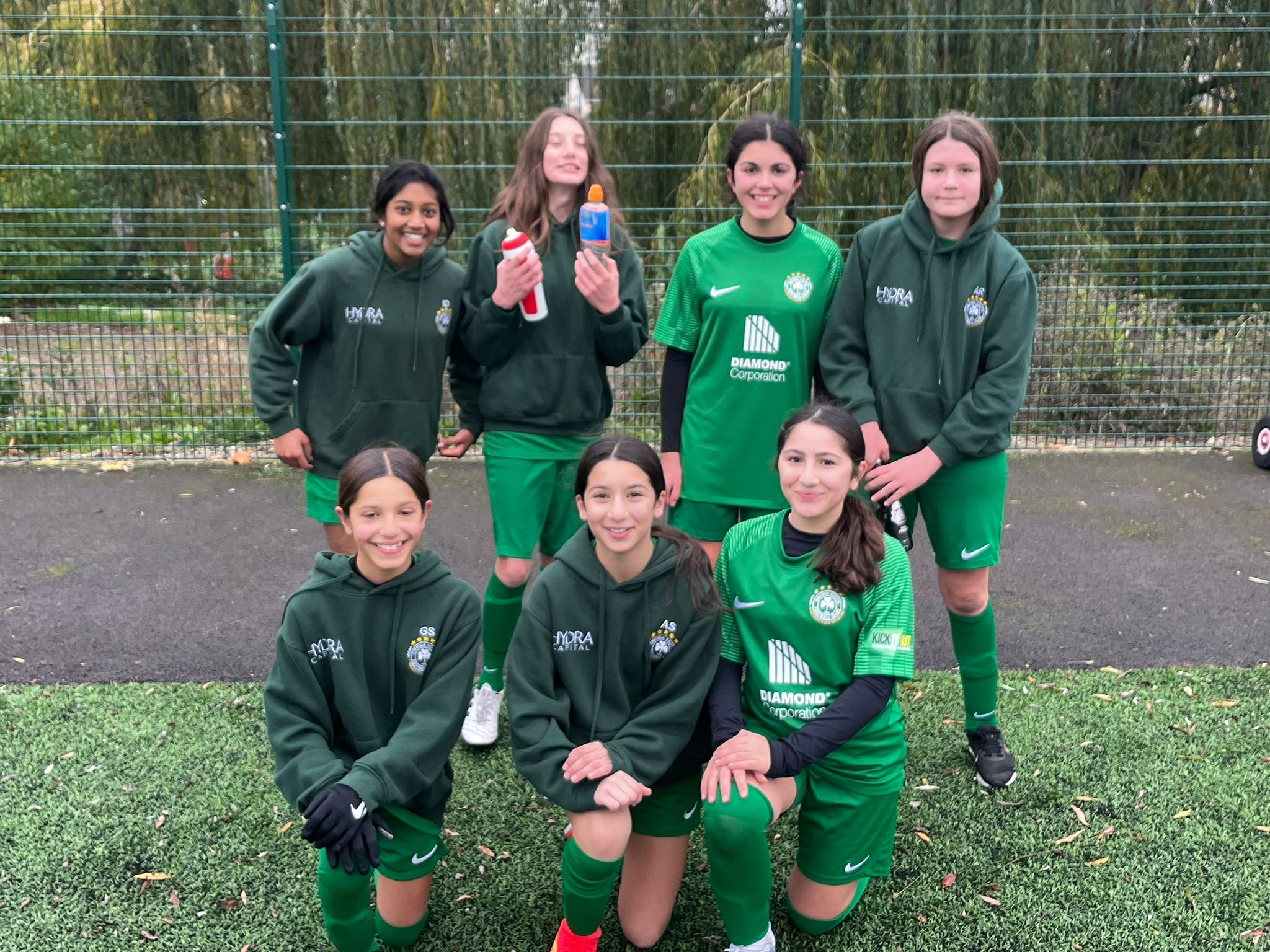 Sophia Karanicholas and Samuel Arthur’s Under 15 Girls again showed their quality to register another victory, this time winning 3-1. It was a slow start to the game but the girls eventually gained momentum and started dominating possession. They went 1-0 down thanks to a few unfortunate errors and that knocked their confidence slightly but the girls came roaring back to score three unanswered goals. Their focus in training recently has been closing down quickly, and the girls certainly did that in the second half. After a few close attempts, the girls finally got a goal back. The team’s confidence rose significantly, resulting in two superbly worked team goals. Goals were score by Shekhinah (2) and Gina. Player of the Match was awarded to Shekhinah for two fantastic goals and sustained high energy and momentum throughout.

Savvas Zavros and David Poncia’s Under 18 Gold plundered the goal against their opposition to win 9-2. They were much the better and the score line didn’t flatter them at all.  The boys continue to play in the right way and scored some good goals. Goal scorers were: James (3), Jon, Nico, Archie, Noe, Leo, Callum with Jono named Man of the Match.

Michael Pieri and Harry Theodorou’s Under 18 White remained unbeaten in the league with a straightforward 5-1 win at home. It was a messy start to the game where passing and movement was the most difficult thing in the world to do. The Under 18 White gained control of midfield having shaken off their passivity out of possession and got the first goal via a set piece from Mihael Min’a precise first time finish. They doubled their lead again from a set piece from Andreas Stavrinou and went into half time in control of the match. They went on to score three more in the second half, all excellent, well worked and well taken goals. Viktor latched onto a through ball as smashed the ball home before Noel ran onto a superb through ball from 40 yards out, outpaced the defence and neatly slotted into the side netting. Michael Pavlou’s shot was simply too hard for the goalkeeper to hold as he got his first of the season. A clean sheet eluded them as they conceded a penalty, but with three points and another win there cannot be any complaints. Goals were scored by Andreas Stavrinou, Michael Mina, Noel Allen, Michael Pavlou and Viktor Borisov. Louie Socratous was named Man of the Match for a dominant centre half display.

Myri Demetriou and Kyri Eleftheriou’s Under 14 White were knocked out of the County Cup but that was not the story of the match as the team put up a valiant effort against a JPL team sitting at the top of their division. The boys matched a very strong, skilled and physical opponent for much of the first half, going in at the break only 1-0 down. The second half was much the same and even though the Under 14 White didn’t threaten much, they showed good discipline, shape and composure on the ball, on a heavy pitch. They conceded a second after a ricochet, and third soon after. The boys lost 3-0 but will have learned a huge amount in terms of levels, and aspirations on a footballing level, both individually and collectively. Men of the match were Alessandro with some inspired goalkeeping and Andreas who was a colossus in the centre of defence.

Andrew Demetriou’s Under 12 Gold played out a 3-3 in what was a match of the proverbial two halves! Playing against the team top of the table they had the better of it in the first half going in 3-0 at half time. Having been working on the team shape and discipline, the boys executed it really well. Goals from Aiden, Noah and Man of the Match Jonah meant they had a cushion going into second half but the opposition came out strong and scored an early goal. This gave them some momentum but it was only until the last minute when they scored the equaliser. The Under 12 Gold boys were disappointed but they had to be reminded it was a good result and performance against a very good side.

George Sammoutis and Angelo Siracusa’s Under 11 Silver had to again take the field with only eight players against nine due to illness and came up against who dominated them at the beginning of the season. Since then, a few tweaks here and there and the boys are looking like a footballing team; twisting and turning on the ball and challenging themselves trying skills and playing with confidence and belief. It was a tough ask but the boys dug deep and managed to score three goals even though they played without a striker. Both George and Angelo were proud of their team and they made sure the boys knew that. Man of the Match was Nicholas who scored all three of his team’s goals.

George Agrotis and Nick Paraskeva’s Under 12 White were coming off the back of two defeats. Issues were identified and worked on in training. Specifically, they have been working on passing out from the back, distribution to the wingers and quicker one and two-touch passing in midfield with more positive passes forward. The performance and result of this match was the fruits from their labour. Although the Under 12 White went a goal down, the boys held strong against a team third in the league with games in hand. They continued to dominate the ball and create chances eventually equalising with the match ending 1-1. Whilst they didn’t win, the boys, parents and coaches were impressed with the performance. What was more impressive was that today’s game was without any subs and without their two highest goal scorers through illness. Goalscorer was Man of the Match Kernius.

Samuel Arthur and John Frangou were in charge of the club’s newest team, the Under 13 Green and last week was their first ever fixture as a newly formed team. They played a team currently fourth in their division. Several of our players had not even met and three of the boys had never even played competitive football. The plan was for coaches John and Samuel to get a baseline of where the boys are in their development. The score aside, the game was very evenly matched and as a team, the boys started playing together in the second half and settled down. They kept their composure, but the difference was fitness. This team is entering the league a third of the way into a season and getting match fit will be key to them competing. The effort and energy was there. Not a single player let their head down even with a big defeat, everyone played until the final whistle. They scored a single goal towards the end of the game and this was testament to the team’s grit and determination. Both John and Samuel are looking forward to watching this young group of players develop.

Sophia Karanicholas’ Under 12 Green Girls faced a tough opponent today but there were still plenty of positives and learning points to take from the game. Their opponents were a team of players who play for two teams and they train and play matches at least twice a week. With the exception of one of their academy players, the girls were very evenly matched, which showed the potential of Omonia Youth team. Well done to all the girls for their determination and resilience. Esme got her team’s only goal with Tia named one of the Players of the Match for a brave performance in defence and linking up well with midfield. Anya was the other Player of the Match for her great communication and strong leadership skills throughout the game.

Mary Tryphona and Christian Noble’s Under 12 Gold Tiger Girls played against an academy team who are also undefeated at the top of their division. This was always going to be a tough game but the girls never gave up they kept playing their game. Well done to Zoss for her goal and to Zoe T for her deserved Girl of the Game award.

Demi Shiamishis Under 13 Girls were deserved 3-0 winners even though they played without substitutes or their regular goalkeeper. The girls came out from the outset determined to play on the front foot and went ahead deservedly through a goal from Andreana Shiamishis early on and never really looked back. A second goal from Karina Georgiou took them 2-0 into half time and the message was to focus and give 100% for the second half. They continued to pepper the opposition goal with shots and scored another via Emily Paschalides to effectively end the game at 3-0.

Chris Gregoriou’s Men’s Team who are sponsored by Crown Mobile Tyres and CMB Partners had a sloppy start to the match today and quickly found themselves 1-0 down. After a quick adjustment in and an increase in intensity, they it 3-1 at half time. The second was again untidy with goals flying in from both teams but the Omonia Youth side ran out 8-4 winners to put them into the next round of the Junior Cup. Goals were scored by Demitris Christodoulou (3), Emmanuel Ejembi, Marco Geremia, Armen Gashi and Chris Yiannitsarou.