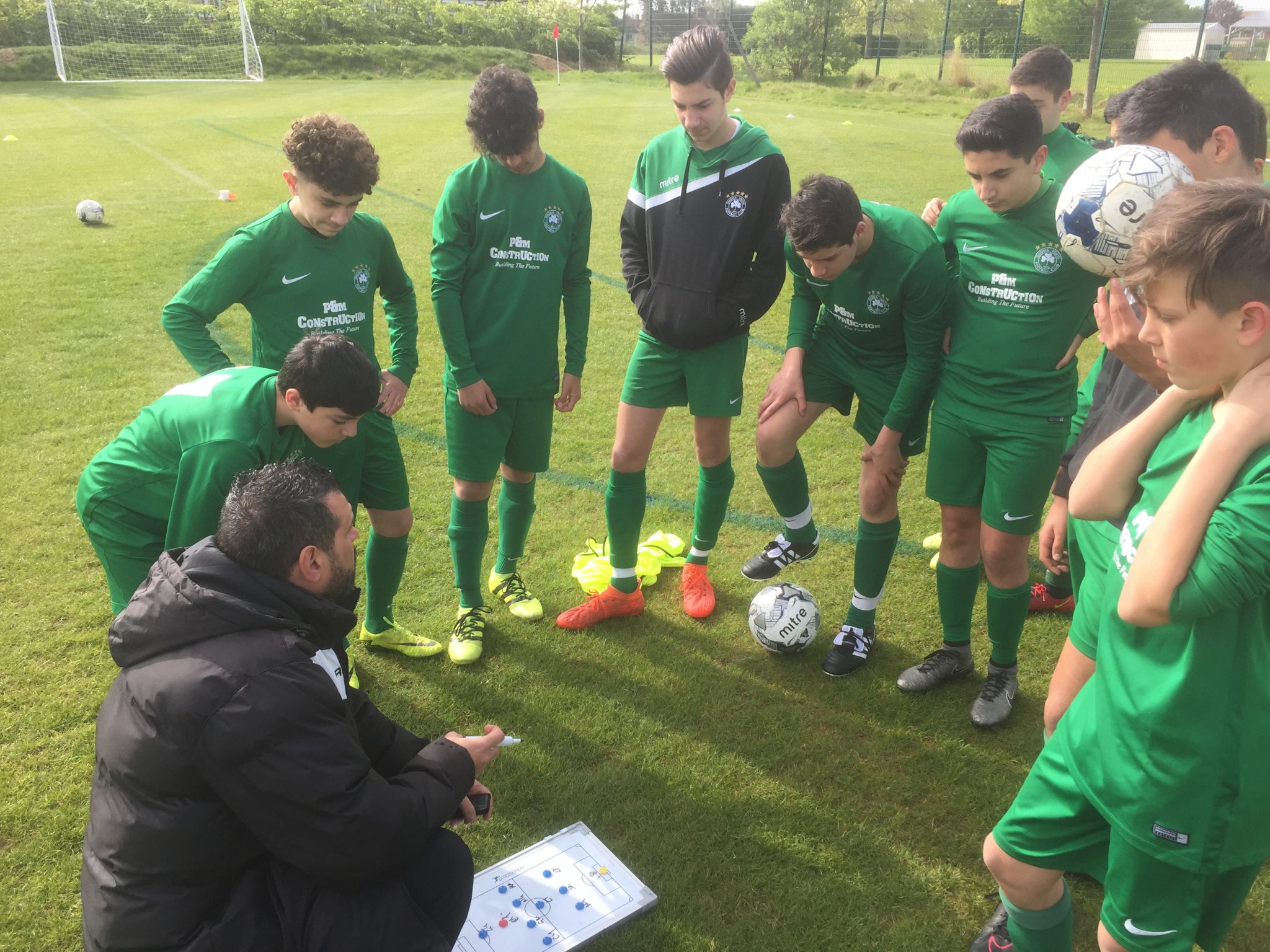 Two out of the three Under 13 teams who were in action recorded wins. Mike Petrou and Kyri Haili’s Under 13 White 3-2 thanks to goals from PG and Louis Petrou. Man of the Match was Adam Curran.

Unfortunately Panos Papa-Michael’s Under 13 Gold couldn’t make it a clean sweep for the age group as they went down 6-5. Having had t play with only 10 men, manager Panos was extremely proud of his team and even with fewer players, they had the chances to win the game. Panos said of the game: “It is definitely character building for all the boys and all part of their football development.”

Youseef Habibi scored four goals and Alex Georgiou got the other one. The whole team were commended and all justifiably cold be awarded the Man of the Match but Youseef was given the honour because of his desire and the fact he never gave up.

Turkey Street played host to another Under 16 derby with Nick Zimaras and Elia Constanti’s team facing each other.

Elia’s U16 Green came out on top on this occasions in a match that was described as a full bloodied which had everything. Both teams fought hard throughout and both also enjoyed good periods in each half playing decent football. There were lots of goal mouth scrambles, brilliant saves and great goals – well done to all! The U16 Green fought back from 2-1 down to win 4-2.

Green goal scorers were Toki (2), Marios Charalambous and Matthew Farrelly and Man of the Match was Nikolas Matjilla. Goals for the White were scored by Joe Cannon and Jordan with max being awarded Man of the Match.

Having been drawn against a team two division higher, it was always going to be a tough task for Chris Gregoriou’s Under 15 White in their Challenge Cup Semi-Final. They eventually lost 8-2 to a very good team who punished every error. Even so, the U15 White played well and they fought until the last minute; they didn’t give up. Chris was rightly proud of his team and was grateful for the number of parents and committee members who attended the match. The goals were scored by Gregory Georgiou and George Kyriacou with Man of the Match given to Stavros Konstantinidis. With four league game left, the U15 White are currently in second place in the league. They only need four points to guarantee promotion.

With only two Under 12 games played and both sides pushing hard for promotion, there was a positive outcome in both matches.

Nick Lingis’ Under 12 Green won 5-1 thanks to goals from Georgios Christoforou (3), George Androutsos and Amaan Salim. Georgios and George were awarded the Man of the Match.

Chris and Jimmy Mousicos’ Under 12 Gold put on a superb performance to win 3-1. With only one match to go, they are handily placed in second. Goals were scored by Mohammad, Rhodos and Aaron. Mohammad was named Man of the Match.

Finally Andy Charalambous’ Under 14 White put on a goal extravaganza as they won 12-2. The result means they have a chance of not only promotion but also of winning the league. With only four games to go, this result will give the team plenty of confidence. Goals were scored by Louis Qamite (3), Rico  Charalambous (3), Erik (2), Louie Capsalis (2), Andreas Georgiou and Alex Pantelli who was also named Man of the Match.

A great result for U13 Green