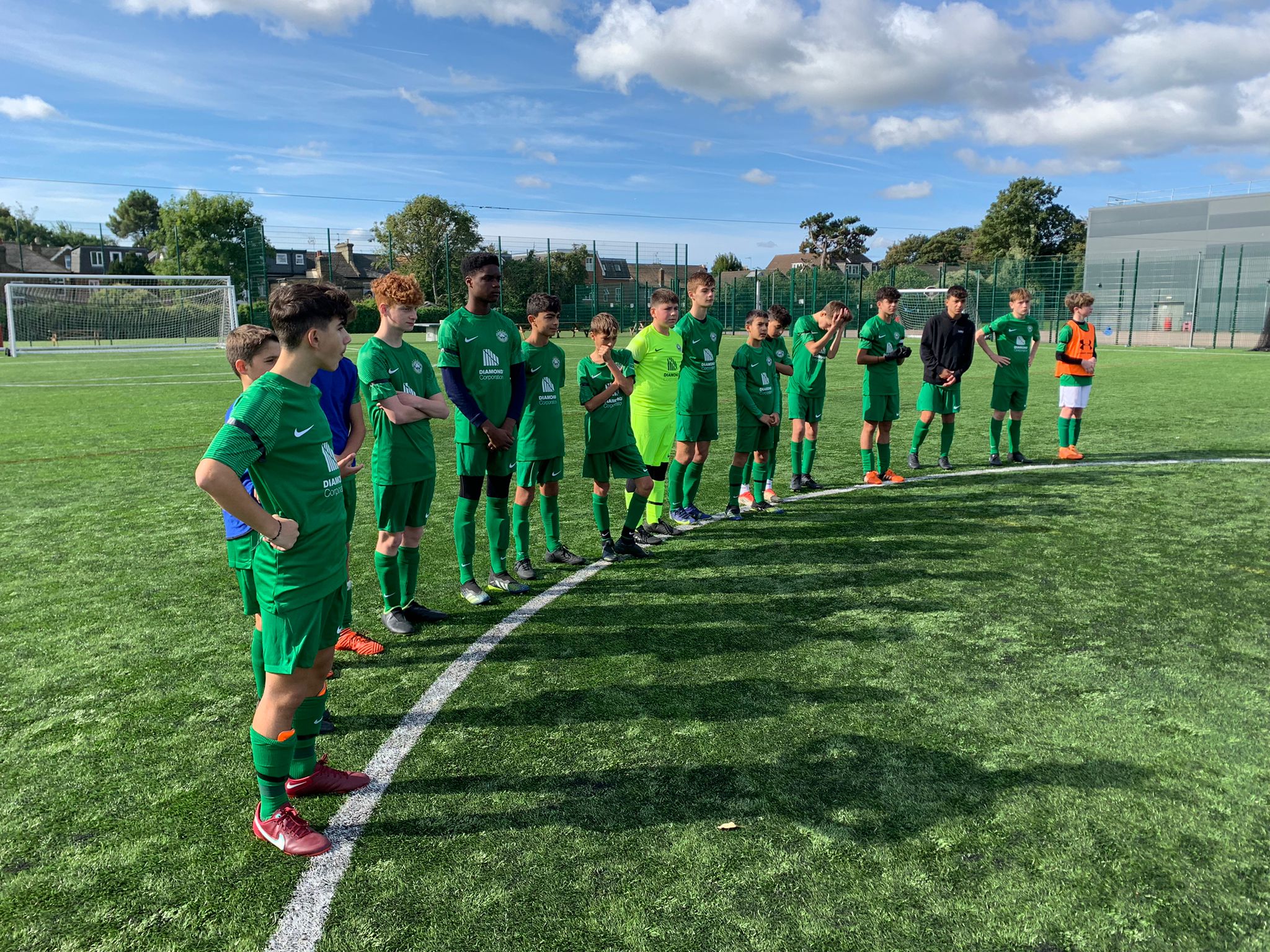 There were lots of good performances and good results for the many teams of community grassroots club Omonia Youth FC, sponsored by Diamond Corp. Ltd not least to teams who were taken all the way in their cup matches and came through tense penalty shootouts to take their place in the next round.

Mike Koumi, Adam Broomfield and Panny Panayiotou’s Under 15 White were in Middlesex Cup action and the long away was worth it after a tight match which they eventually won on penalties. On a poor playing surface it took a while for both teams to find their best form and it was a predictably scrappy game as ball was held up in the long grass. This meant that few chances were created in first half. With the opposition resorting to using long balls, the Under 15 White persevered with their brand of football and it paid dividends as they went 1-0 up in second half with a thumping header from a corner. The boys went on to create 3 or 4 more good chances but couldn’t covert. With the match nearing its conclusion a fortuitous bounce of the ball benefited the opposition who equalised. The match went straight to penalties and it was the Udner 15 White boys who kept their heads, were clam and precise with their spot kicks to score four out of five to progress to next round. Thomas got his team’s only goal with Zee named Man of the Match for a solid display at the heart of defence.

I the Fa Under 14 Cup, Myri Demetriou and Kyri Eleftheriou’s Under 14 White put on a superb performance against a team a division higher. Every boy was focused and on point, keeping a good disciplined shape, pressing at the opportune times, and counter pressing when they lost the ball. Most eye-catching was their ability to play really fluid football from front to back. The game was very tight with missed chances from both sides. The position took and held the lead until half time. At the break the boys were told to trust their football and continue to do the same thing and this showed in the second half as they dominated possession. The Under 14 White deservedly got our reward with a cool left footed finish into the corner from Man of the Match after Kyri’s shot was parried away by the goalkeeper. Like the Under 15 White, with the score at full-time 1-1, the game went to penalties.

Nicholas in goal pulled off some superb saves and with two penalties to go, the Udner 14 White only had to score one to win…but they missed both. What drama! On to sdden death, and the boys won through with Theo getting the winning penalty. There were mazing scenes at the end with parents and coaches very proud of the team. Every player made a decisive contrition with some standout performances: Alex playing upfront then in goal, Theo with his best game of the season so far, Andrew strong in the tackle and very intelligent use of the ball. Well done all!

Michael Pieri and Harry Theodorou’s Under 18 White endured a tough afternoon. Even though they raced to a deserved 2-0 lead early in the first half, profligate finishing missing four one-one-one chances gave hope to their opponents who ended the half stronger. The Under 18 White got punished before halftime and went into the break 2-1 up. They extended their lead by scoring early in the second half to calm some nerves and then went on to control most of the game before several lapses in concentration gave the opposition a lifeline as they scored to set up a tense finale. The boys held out to maintain their unbeaten start in the league with a 3-2 win. Goals were scored by Noel Allen, Igor Matos-Gomes and Andreas Stavrinou. Man of the match was awarded to Michael Pavlou for an all-action midfield performance.

Sophia Karanicholas took charge of the Under 12 Green Girls and it was another strong performance. The biggest positive over the last few weeks is how well this group has gelled and supported each other as a unit, almost like they have been playing together for years rather than weeks. Even though the match was very one-sided and it was a large score in their favour, Sophia wanted to emphasise to the girls and all stakeholders an important message. She said:

“…we are here to instil good morals and values and help raise great people (rather than just footballers). We are here to set the best example for the children. It was a large score line in our favour but we felt it important to show respect towards our opponents and not ruin the enjoyment of the sport of all girls involved. We encouraged our opposition to use power play rules (eventually had 10+ girls on the pitch) and switched our defence and attack.” It was a great effort from the girls and they should be proud of what they are achieving.

Player of the match was awarded to Faith who was solid at the back and showed great confidence by scoring her first two goals of the season. Tia also has shown huge improvement week in week out and she gives it her best every time.

Jason Plysi and Tony Stylianides’ Under 12 White Lion Girls struggled to get out of first gear and the pace of the game got the better of them. They played some really neat passes throughout the game which was really impressive. In the first half they were unable to create clear cut chances, so they were set a challenge at half time to get at least 5 shots on target and they scored not long after the kick off. The girls tried very hard to unlock the opposition defence which led them to scoring a couple of goals on the counter break and this really affected the confidence of the team which ultimately led to more goals being conceded. Ria got her team’s goal with Alice awarded Player of the Match because she never stopped running, worked really hard for her team and made some important interceptions and key passes.

Chris Gregoriou’s Men’s Team who are sponsored by Crown Mobile Tyres and CMB Partners were up against the team they beat 8-2 a few weeks back and unfortunately fell into the trap of thinking all they needed to do was turn up to win the game. Even though the Men’s Team were comfortable in the first half they should’ve taken advantage of the chances they created and only went into the break 2-1 up.  The second half was very different and even though the opposition was reduced to 10 men due to injury, they were the better team and scored two goals which put them 3-2 with only  with five minutes to go. The Men’s Team though dug deep and scored two quick goals to take the points and keep them on a run of seven straight wins. Goals were scored by Emmanuel Ejembi, Daniel Philippou, Thomas Barry and Man of the Match Nick Gregoriou.

Sophia Karanicholas and Samuel Arthur’s Under 15 Girls were defeated 2-1 in a tough match in challenging conditions. Ultimately, the opposition wanted it more and brought more aggression to the game as they won the majority of 50:50 balls and in general communicated constantly as a team. The Under 15 Girls were not as clinical in front of goal as they usually are but these sorts of games happen. They will learn a lot from the experience and the girls gave it everything which is all anyone can ask for. Shekhinah got the goal with Ellie and Temi name Players of the Match. Ellie for being he most versatile player on the pitch and has been for the most part of the season so far. She kept battling until the end. Temi showed great confidence in goal which lifted the team massively. Strong decision making in deciding when tyo come out and when to stay on her line.