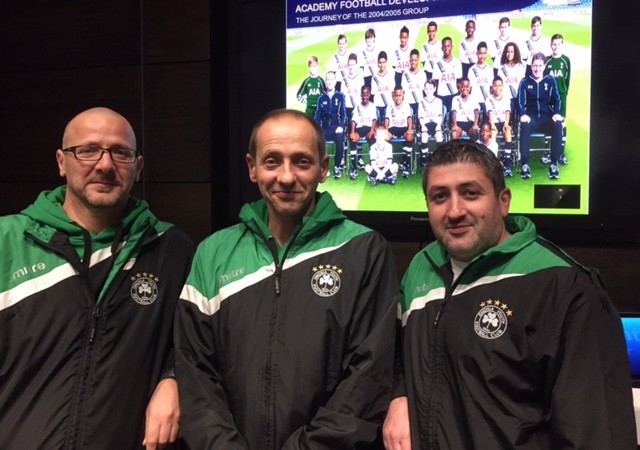 Mike Koumi, coach of Under 9 White, Savvas Zavros from the U11 Gold and Adam Demetri from the Under 8 & Under 11 Silver were joined by coaches from other local clubs.

The event took place on Wednesday 9th November 2016 at the Tottenham Hotspur Training Centre, in Enfield.

The aim of the evening was for Tottenham to offer the attending coaches the opportunity to visit Tottenham’s world class training centre and learn more about their ethos and philosophy and how the Spurs Academy functions.

Coaches were told how Tottenham train their U9 to U12 development and academy teams including a talk about children’s well-being. Coaches were also taken through the journey and club’s process of what it takes for young footballers to make it to the first team.

Finally the coaches observed a training session held by Academy staff to one of the Academy groups and then had the opportunity to ask questions.

It was a thoroughly enjoyable and interesting evening which gave the Omonia Youth FC coaches much food for thought. Their experience and the information they gathered will now be shared with the other 20+ coaches at the club.