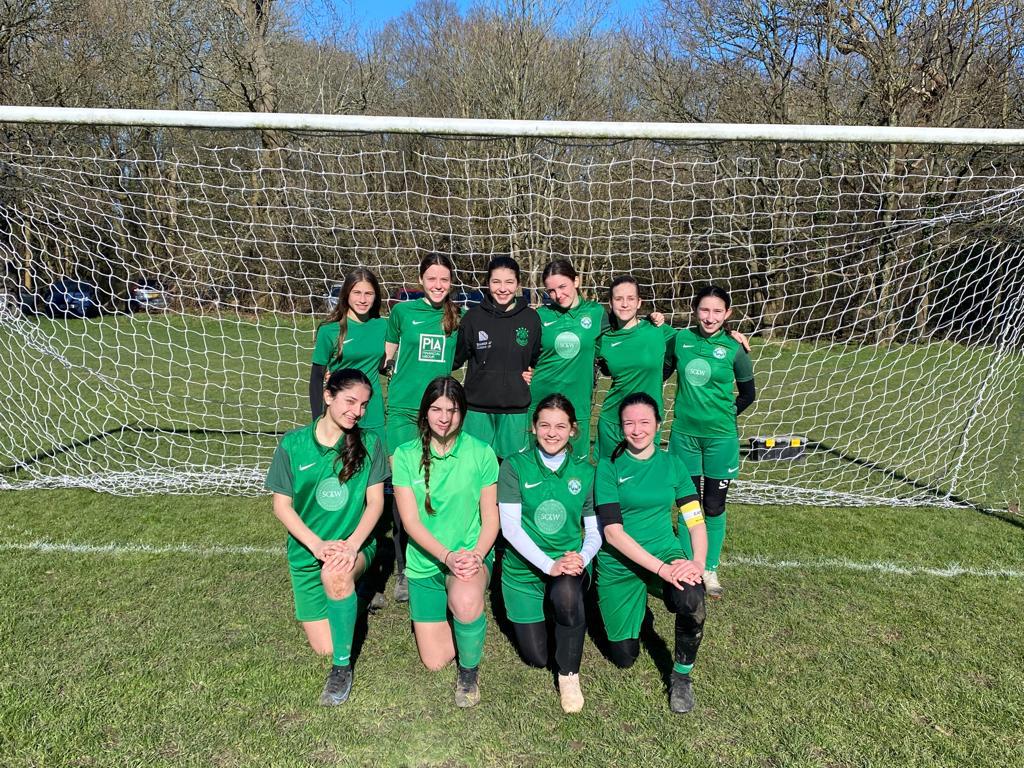 Community grassroots club Omonia Youth FC, sponsored by Spector, Constant & Williams, Vas Barbers and V Jewellers were celebrating the success of their Under 18 Girls team who put on a fantastic performance to win their cup tie and progress to the next round.

George Pantellides’ Under 18 Girls are through to the next round of the cup thanks to a brilliant team effort. The story of the season thus far has been one of missing players for various reasons (Covid, mock GCSE exams and other commitments) but last Sunday the girls made their coach proud with their performance. Even though they only had 11 players, every player put in a monumental effort. Goals from Maggie and Christina in normal time and Nehir in extra time was deserved reward for the girls’ efforts. With the score level after extra time, the team had to endure a tense and nervous penalty shoot-out. The penalty shoot-out included one retaken penalty which was missed, which made the finale even more tense with the Omonia Youth Under 18 Girls prevailing. George was rightly happy at the final whistle and he said:

“I would like to give a massive thank you and congratulations to the players and parents who have persevered despite many downs, but today was a real highlight. Not because of the win or result but because the girls fought for each other for 120 minutes and with no substitutes. Emilia saved two penalties in the shoot-out and she scored her pen and was joined by penalty scorers Lucia, Player of the Match Mary, and Maggie who score the final penalty. Skipper Shira even won all three tosses making it a perfect day!” Well done to George and the girls.

Myri Demetriou and Kyri Eleftheriou’s Under 13 White also progressed to the next round of the cup as they won their Challenge Cup 3-2 but it was a tough day for the boys. On paper, against a team a couple of divisions below the expectation was that the match would be straightforward, but it was anything but. However, with hard work and the right attitude they eventually got through the tie. The Under 13 White took an early lead thanks to Lewis. At this stage of the match, the boys were playing some nice stuff and in complete control but chances that were created, were spurned. The opposition pressure started to grow in the second half and they scored twice in quick succession to take the lead. Pleasingly, this seemed to galvanise the boys, most notably Andre who showed the leadership qualities and a positive mental attitude to step up. He battled and won a scrappy loose ball in the box to get the equaliser, and then soon after he intercepted a ball and ran through to slot the ball into the corner which proved to be the game winner. It was no surprise he was named as Man of the Match.

Savva Zavros and David Poncia’s Under 16 Gold tasted defeat in a thrilling game which was won by the odd goal in seven. It was felt that the team were unfortunate to come off the pitch defeated as they were the better side for large parts of the game but a couple lapses cost them. Of the opponents four goals, two were penalties.

What was pleasing was the attitude of the team and the bravery to try new things as David explained: “So today we played with a whole new back four. A left back and left winger in a central defensive role and a player who joined us having only ever played in goal playing as our striker. And all this at Under 16’s. Isn’t this that what player centred development looks like?”

Alex Christofi and Serkan Nihat’s Under 15 White were involved in a top of the table clash with top playing second with the Under 15 White coming away with three precious points thanks to a 3-1 win. This was a match played between two teams who play good football and have a great team spirit. The Under 15 White boys were so excited for this game and it showed as they dominated from the first whistle. Their play was rewarded with a spectacular effort from Sidie Sesay, which was described by Serkan as “… one of the best goals many of us have ever seen in youth football. It was great moment for him as both teams appreciated an amazing piece of skill.” The other goals were scored by Anthony P and Theo.

Sophia Karanicholas and Samuel Arthur Under 14 Girls suffered a 7-2 which is in contrast to their recent excellent run of form. Gina got both goals in a tough game for the girls made even more difficult with the condition of the pitch. Playing against a team they believed they were evenly matched against they went into the game without their goalkeeper so relied on four other players to step up for goalkeeper duties. This predictably disrupted the flow of the game for the girls and while the score line evidences a one-sided game, it was far from that. The girls came back from 2-0 down and were only 3-2 down with 15 minutes to go. With a possible draw or win to play for, the girls were too aggressive offensively and abandoned the defensive discipline that had got them back in the game. As they pushed up in large numbers looking for an equaliser they left huge gaps in the midfield allowing their opponents to counter superbly and they scored four times goals in 13 minutes. The difference was the opponent’s ability to adjust to the poor conditions of the pitch. The positives were that the girls held the leaders of the division above to just two goals in the first half, they never gave up and were the better team for large spells of the game. After the game Sophia said: “This was another opportunity to learn and there was a plenty we took away from this game. Onwards and upwards. Congratulations to Marine and Niamh for being named Players of the