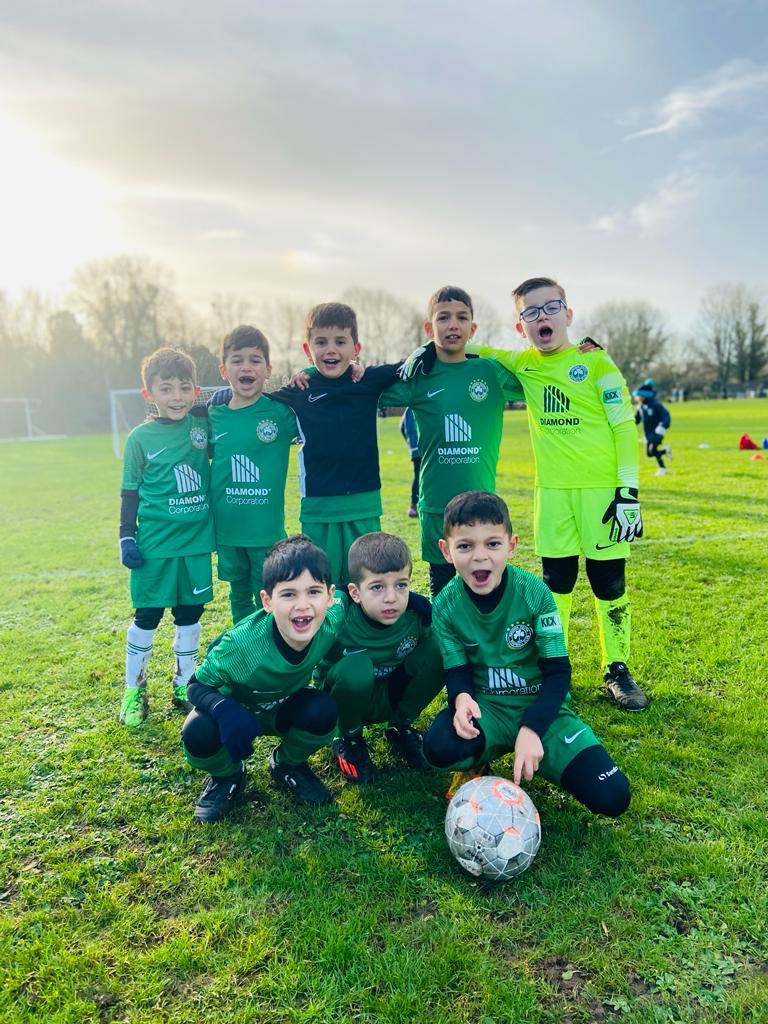 After the winter break, community grassroots club Omonia Youth FC, sponsored by sponsored by Diamond Corp. Ltd saw many of their teams back in action.

Jason Plysi and Tony Stylianides’ Under 12 White Lion Girls couldn’t complete their match due to the inclement weather, but what was played was encouraging for the future. The first half was evenly matched for long periods. The Omonia Youth defenders were doing really well to suppress the opposition attacks. As the game progressed, a few players started to tire which allowed the opposition more time on the ball and this led to their two goals in the first half as players weren’t tracking back. This was discussed during half time and the girls were set a challenge to win back possession as quickly as they could, once they had lost the ball. There was a big improvement in the second half, but the girls struggled to focus towards the end because of the heavy rain and hail. The girls created a few half chances to get a goal back, but never capitalised the opportunities. Another goal was conceded during the hail storm, but by then, the safety of the players meant the match was eventually was abandoned with a few minutes remaining. Player of the Match was awarded to Dolsie who gave her all, as she chased every loose ball and made some important interceptions.

Jay Kemal, Jack Markou and Demi Christou’s Under 12 White were in Middlesex Trophy action and they won a hard fought match 3-2. The boys showed great composure in the second half in keeping their heads in the game and a deserved win sends them into the semi-final.

Savva Zavros and David Poncia’s Under 18 Gold won a thrilling match 6-5 but they really made hard work against a team they beat 9-2 only a few weeks ago. They looked like a team that felt they didn’t have to get out of first gear to win the game and this attitude almost cost them. Leading 3-1 at half time the Under 18 Gold then found themselves 4-5 down with just 8 minutes to go. They did wake up at this point and both Savva and David were proud of them for turning the game around to take the points but it shouldn’t have been that way. It did though make for a great watch for the parents and supporters!

Goals were scored by Noa (2), Leo, Jono, Nathan and Kaian with Louis awarded Man of the Match.

Sophia Karanicholas and Samuel Arthur’s Under 15 Girls won again thanks to goals from Shekhinah (3), Gina (2) and Tilda in what was an outstanding performance. Training has recently centred on combination passing and taking shots on goal and it was pretty much like the cones were laid out in the pitch during the game. Passing play was superb and there were plenty of one-two touch passing across all areas of the pitch. The two goals conceded were late in the game and purely down to lack of concentration and tiredness which is expected in their first game back as aside from the, defensively the girls were phenomenal.

Players of the Match were given to Niamh for a flawless performance in defence where she only lost the ball only twice in the entire game; Georgia who demonstrated great composure and skill on the ball and is going from strength to strength in each game. To sum up the day, Sophia said: “It is games like these that remind Samuel and I how lucky we are to coach such a talented and high achieving bunch.”

Costas Constantinou was a proud coach as he saw his Under & White team play their first match as a team and where many of the players had never played against another team before. It was a wonderful occasion with parents and supporters encouraging the boys throughout the match. Costas was impressed with the effort and energy from all the players as they all played until the final whistle.

After the game Costas said: “The boys were predictably exhausted by the end but all had a smile on their faces asking about the next game. We are all looking forward to watching this young group of players develop and it all of them were deserving of Man of the Match.”

George Sammoutis and Angelo Siracusa’s Under 11 Silver gave a rather sluggish performance. The 9:30am kick off probably didn’t help and this also their first match after the Christmas break. But the boys battle through and played some good football at times, always trying to pass and dribble, resisting the temptation to booting the ball long. At eh final whistle the boys were buzzing. George wanted to also thank Stefanos Pieri, one of the club’s Under 18 players who refereed game with George saying he “…controlled the game perfectly today.”

Samuel Arthur and John Frangou’s Under 13 Green were always going to find the game tough with only 10 players, but you would never have known they played with a player down. The boys were alert from the whistle and battled for every ball. The plan was to play the ball early and stay up the pitch, which the boys did brilliantly. They were able to dominate much of the game with the opposition coach and team panicking as the Under 13 Green came back from 1:4 to 3:4 with five minutes to go. Not a single head dropped and both coaches were rightly proud of the boys. Both Samuel and John enjoyed watching this game and are excited to help these boys develop over the coming weeks, months and years.

Man of the Match was awarded to Jack who was outstanding as he won every single ball and one v one battle. Goals were scored by Theo (2) and Aston.

Nick Paraskeva and George Agrotis’s Under 12 White were in Challenge Cup action and won through to the next round after a thumping 6-1 victory. It was a hard fought win but well deserved in the pouring rain.

The Under 12 White got off to a great start one-nil up after only six minutes thanks to a confidently taken penalty by Roman. The opposition then came back and scored an equaliser before half time.

The boys were reminded at half time that there are no second chances in cup games and they were challenged to play without fear or hesitation. The second half was an altogether different story as the boys scored five goals in an eight minute burst to put the tie to bed.

It all started with a long-range free kick, won by and perfectly executed by Kernius. Christoforo raced onto a spilled shot from the goalkeeper to score then a lovely solo goal from Nicholas who ran past players from the half way line and calmly slotted in. Zain’s produced a lovely low shot from the edge of the box and finally the goal of the day which included a total of 9 passes starting from the defence which included a one-two on the edge of the box finished off by Roman. The parents and supporters were amazing again

Zeno Vryonides Under 15 Green finally played a match after six weeks of waiting for a fixture but it was to prove a tough match against a team several division higher. Nevertheless, the boys were exciting to be playing football again! Conceding goals or the atrocious weather could dampen their enthusiasm and the boys battled even without any substitutes. Towards the end of the match, the boys found some energy and they scored a great goal which felt like we won the FA Cup itself. All the players were awarded Man of Match; it was a big ask from them to play in these conditions and fight the way they did against a team several divisions higher than them but they kept heads up and kept trying to play their game until the end

Chris Gregoriou’s Men’s team, who are sponsored by Crown Mobile Tyres and CMB Partners lost 2-1 in the Middlesex Cup quarter final. Profligate finishing was their undoing and they can now concentrate on retaining top spot in the league. Goal was scored by Yianni Polycarpou. 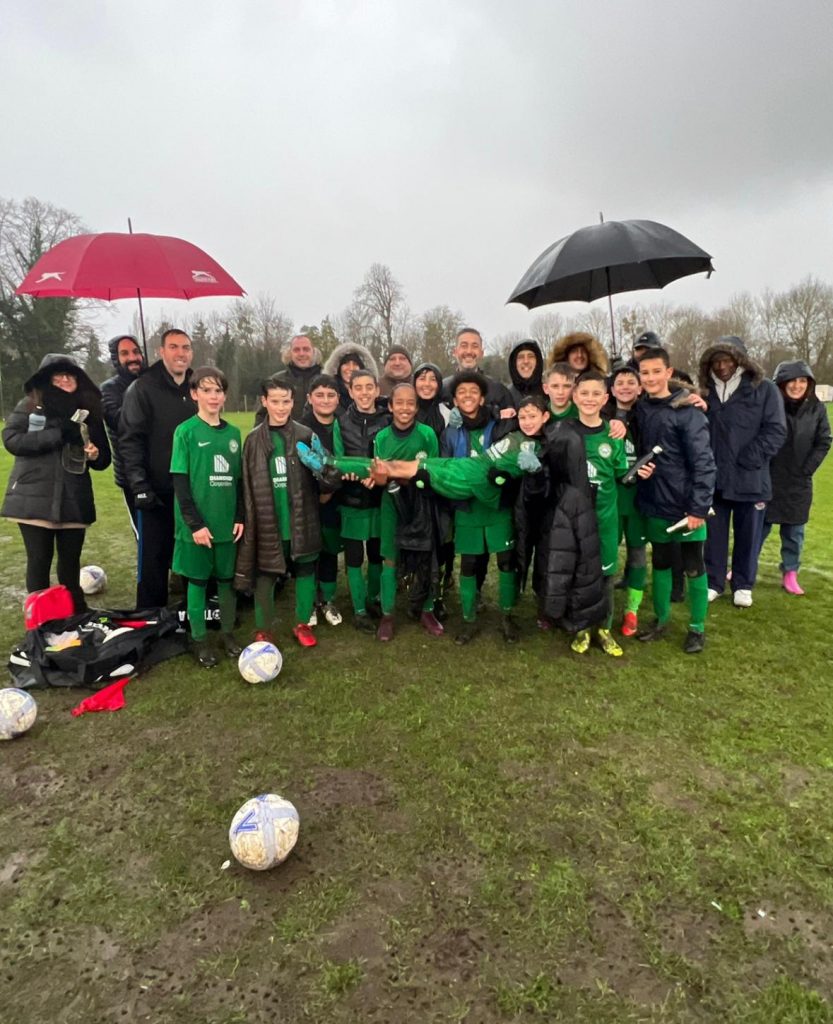