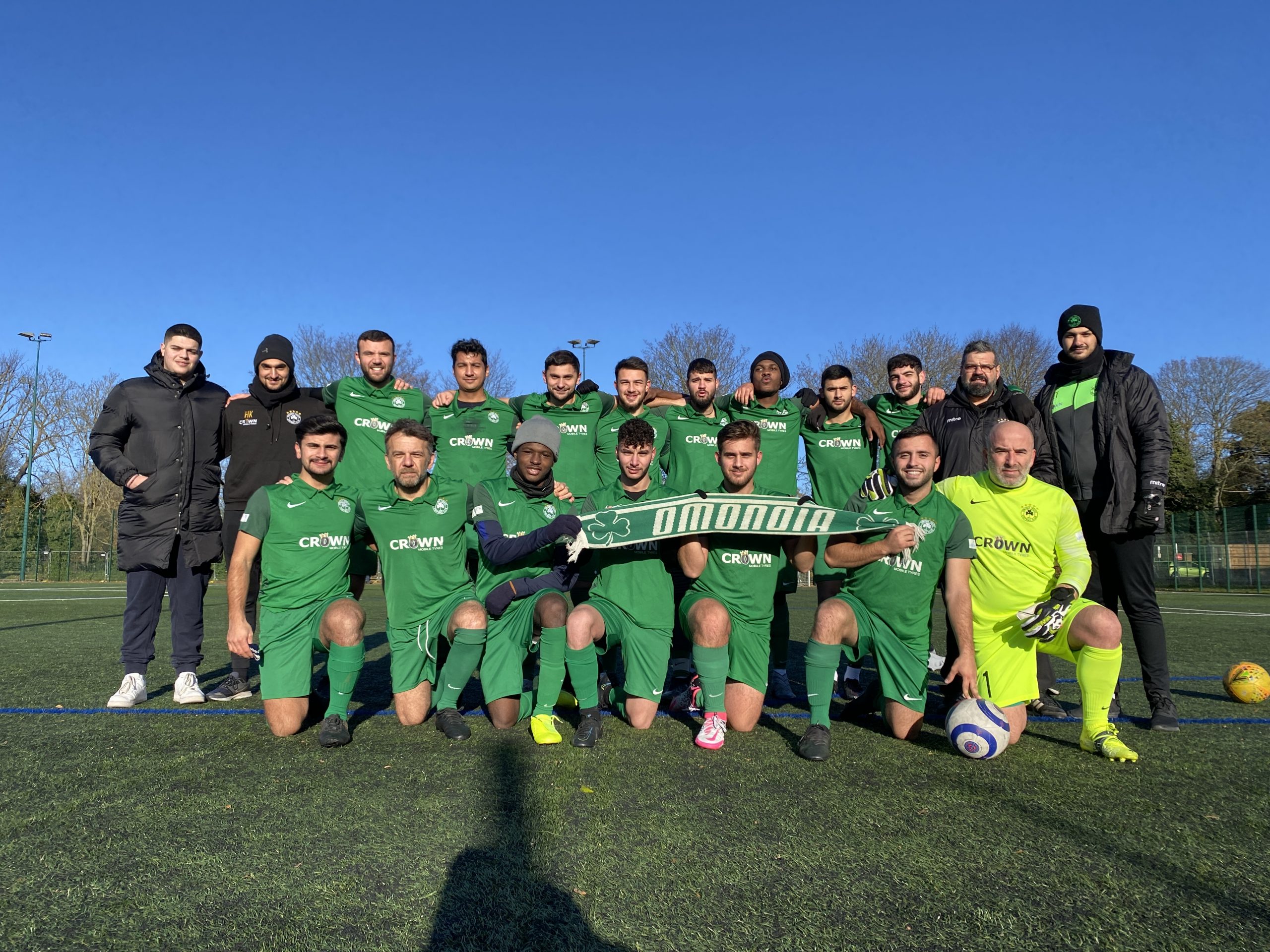 On a crisp winter day on Sunday, there were many good results and performances to celebrate for community grassroots club Omonia Youth FC, sponsored by Spector, Constant & Williams, Vas Barbers and V Jewellers.

The game of the day saw the club’s fledgling men’s team take on the giants of the KOPA League, Omonia London FC. The Men’s team is sponsored by Crown Mobile Tyres and The Master Locksmith.

Dubbed the ‘Omonia Derby’ or the ‘Trifilli Derby’, Sunday was a seminal moment for Omonia Youth FC’s Men’s team as they beat Omonia London 2-1. Omonia Youth FC went into the game buoyed and encouraged by a run of recent good results and on Sunday started on the front foot, determined to impose on their opponents their youthful exuberance. What was evident early on was an energy to contest every ball and to close their opponents down. This was nowhere more exemplified than in the build up to the opening goal as an innocuous pass across the Omonia London defence saw the defender dither. This indecisiveness was pounced on by Donaldo Ndoj who got to the ball first and his quick feet saw him get clear of the defender, seat the goakeeper on his backside, before slotting into the empty net. 1-0. Out of possession Omonia Youth were quick to get back into their shape, evidence of the maturing nature of this team and the coaching they are clearly benefiting from. They continued to frustrate their opponents and they went on double their lead before the end of the first half. Donaldo Ndoj was again involved, this time perfectly setting the ball back for Kay Kyprianou after a good wing work. Kay calmly slotted home.

The second half was very even and with Omonia London pushing to get back in the game, Omonia Youth retreated further and further back, conceding space and possession. Omonia London got their reward for incessant late pressure and halved the deficit from the penalty spot, dispatched expertly by Jordan. With the game edging to its conclusion, Omonia Youth resisted late pressure to secure a famous win and three points. Men’s coach Chris Gregoriou was delighted with the resulted and hailed Man of the Match Hadi Power as a catalyst for the win, marshalling the defence superbly.

A point to note, and something to celebrate, is that between the two teams there were 12 players who started the match who came through Omonia Youth FC youth teams over the years and a further four on the bench. Evidence indeed of the richness of community talent that continues their football journey from Omonia Youth and into our community KOPA league. Among the watching fans were four former Chairmen of Omonia Youth (Elia Constanti, Kyp Kyprianou, Michael Pieri and Tony Antoniou) and current Chairman Myri Demetriou.
Elsewhere, Sophia Karanicholas and Samuel Arthur Under 14 Girls were 7-4 winners in their match this weekend. Playing in very difficult conditions this very much became an unpredictable game with plenty of unexpected moments. The girls showed great resilience and a ‘never-give-up’ attitude as they kept powering through with a well-deserved victory at the end. The Under 14 Girls completely dominated with a lot of possession, putting into practice the focus on passing and possession. Siphia was particularly pleased with one aspect: “I was delighted to see the girls spread the play and hold possession with confidence. They deserved their win.” Payer of the Match was awarded to Hollie Taylor and Mea Branco.

Michael Pieri’s Under 18 White endured a tough morning. A very, poor first half somehow saw them get into half time 0-0 as the opposition contrived to miss two gilt-edged chances to lead but profligate finishing saved them. A stern half time talk and a couple of personnel and tactical changes ten saw the Under 18 White saw dominate the ball more in the second period. A stunning individual effort from half time substitute Igor Gomes- Matos gave them lead. Soon after Igor scored again to double the lead after a wonderful shot from Noel came crashing off the crossbar. Igor was quickest to the rebound to tap in his second.  The Under 18 White pretty much then controlled the rest of the match. The win makes it six league wins in a row to cement their position in second place in the table. Man of the Match was awarded to Igor for his brace and Edwin Abbassi who deputised in goal.

Kerem Denizer and Paul Pavlou’s Under 12 Green lost 4-2. The team were grateful to goalkeeper Hermaan who pulled off a string of fine saves to keep his team in it as they started rather slowly.

Ther was a great performance from Zac which led to some excellent, accurate long balls, some good decisions and a non-stop positive approach which encouraged his teammates.

Having gone two goals behind, the Under 12 Green were always chasing but narrow the deficit but one of the goals was beautiful to watch. Some amazing one-two interplay between Huseyin-Emre, Jemiah and George on the right wing that ended with the ball in the net. To reflect, even though the boys lost the game, it was still a fantastic performance, considering the cold conditions and up against a very technically adept opponent. Goals were scored by George and Jemiah. Zac Frangou was awarded Man of the Match with H Denizer, Jemiah Edwards and George Pavlou named best contributors.

On Sunday the club’s newest girls team, the Under 8 Girls played their first ever match as a team with coach Jason Plysi taking charge. With the opposition a player short one of the Omonia Youth girls kindly volunteered to play for them The friendly match was great way for the girls to experience real match day conditions and it was no surprise they took a while to get into the game and were a bit timid at the start. Although trailing at half time, they battled and played a much better second half almost drawing level. They grew in confidence as a team, passing to each other more accurately, calling for the ball and taking on players. What impressed most was their ball mastery as they were able to showcase their ability in changing direction, turning and stopping the ball. A very encouraging start for all the players who were stars.

Savva Zavros and David Poncia’s Under 16 Gold lost 2-1 in a match they could and should so easily have got something from. Their goal was an owen goal with James Carter named Man of the Match.

Zeno Vryonides, Mario Georgiades, Elias Neocleous and Vas Simou’s Under 14 Green needed a bounce back win after recent results and they emphatically got what they sought as they completely dominated their opponent winning 12-1. In such a one-sided match, it gave the coaching team the opportunity to rotate players, allowing them to experience different positions. Both the team’s goalkeepers got to play outfield with one of them scoring a goal. Scoring multiple goals from different players and from different positions was a great achievement and great for their self confidence. Scorers were: Aleks (4), Andonis (3), Nathanal (2), Michael, Christopher and Georgie. Man of the Match was awarded to goal keeper Christopher.

Mary Tryphona’s Under 11 Girls teams both had matches on Sunday. Tony Stylinaides took charge of the Lions and they were brilliant; they never stopped working for each other and their effort could not be questioned. Every player played their part in an entertaining game and they should have taken the lead in the first half. However it was tougher in the second period as the strength and size of their opponents took its toll, but the Under 11 Lions kept going to the final whistle. Sophia was named as the undoubted Girl of the Match. The Under 11 Tigers benefited from the coaching of Omonia Youth FC legend Kyri Georgiou as he helped out the team. All the girls never gave up and battled to the final whistle. 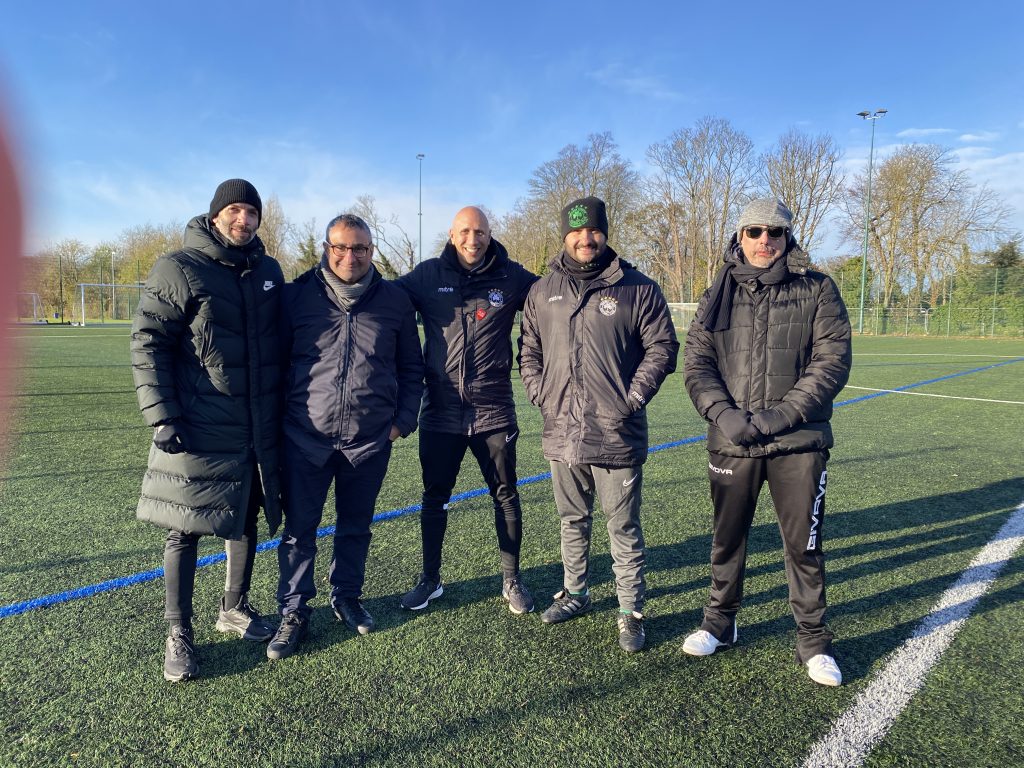 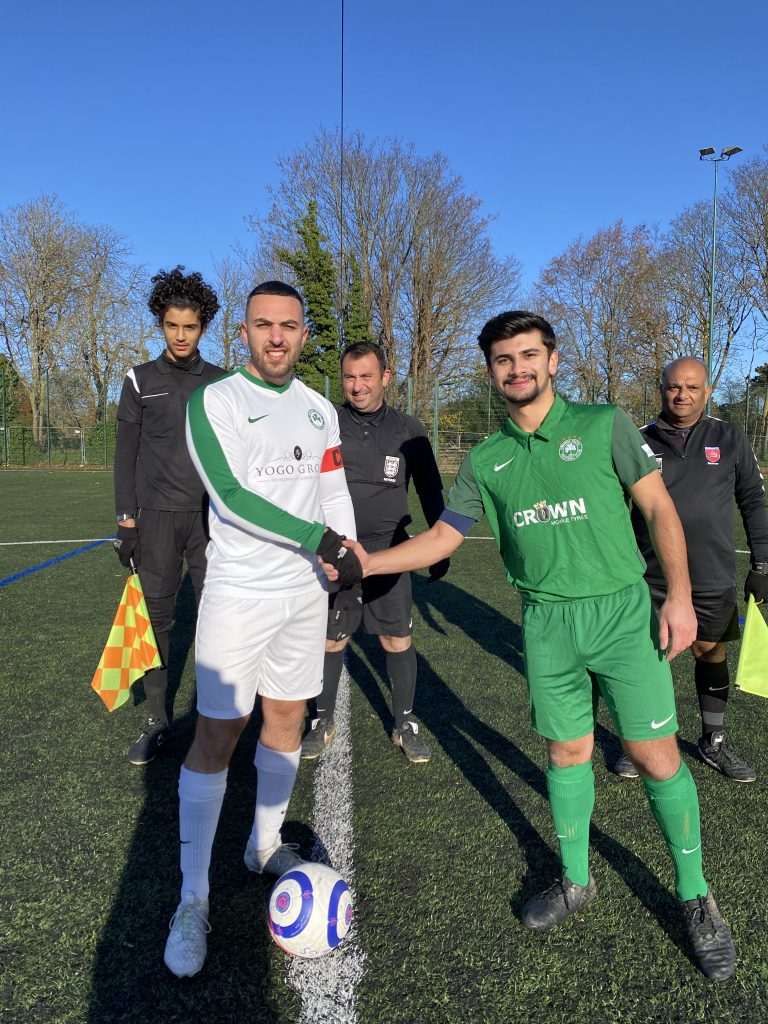