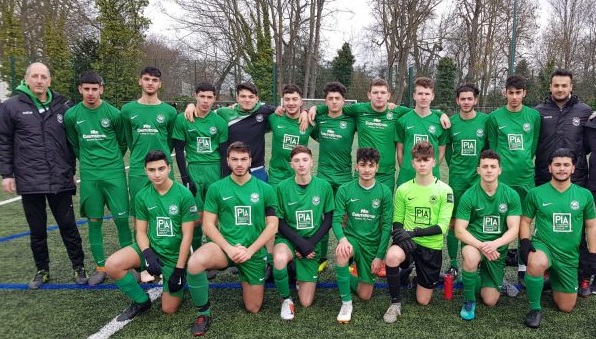 This season, community grassroots club Omonia Youth FC, sponsored by PIA Financial Group and Philip Ross Solicitors, have three Under 18 teams competing and on Sunday all three won as they led the way on another positive day for the club’s many teams.

Nick Georgiou and Dino Savva’s Under 18 Gold put in another strong team performance, especially offensively as they scored seven goals in a 7-3 win. The boys lost a bit of concentration in the second and that’s when they conceded. Their goals were scored by Rivaldo Dju (2), Styli Chrysostomou (2), Peter Michael, Theo Stavrou and Stefanos Kizas. Man of the Match was Styli Chrysostomou.

In the first round of the Middlesex Cup, Kyri Georgiou’s Under 18 Green went on a scoring spree as they scored fifteen times in a totally dominant performance. Goals were scored by Yianni Polycarpou (5), Solos Souris (2), Antonio Panayiotou (2), Michael Speers (2), Tom Vaso, Andreas Georgiou, Stelios Mina and Robert Neophytou. Stelios Mina was named Man of the Match.

Also in the Middlesex Cup Chris Gregoriou’s Under 18 White had a long trip to Ruislip but it was well worth the journey. Having gone 1-0 down the boys showed heart, grit  and determination to turn the score around and lead go 3-1 until the opposition made in it 3-2 with 15 minutes to go. The Under 18 White had to endure relentless pressue but debutant goalkeeper Georgio Michaelides made a great save from a penalty to keep the score 3-2 and win the game for his side. Manager Chris gave a special mention to three debutants who made a massive difference to the team’s performance – Georgio Michaelides, Steven Wright and Man of the Match Maleak Minto. Goals were scored by Steven Wright, Chris Yiannitsarou and Stavros Konstantinidis.

In the Under 15 age group, the four teams couldn’t replicate the same clean sweep of victories. In the Junior League Cup Michael Pieri’s Under 15 White progressed to the next round thanks to a 4-0 win. The Under 15 White were always in control, played some very good football and scored some good goals. On a very wet day it was a solid performance which cheered up the watching crowd. Goals were scored by Alfonso Rosselli, Igor Gomes-Matos, Emanuel Ouoha-Nzeh and Thomas Georgiou. Igor was named Man of the Match for his immediate impact coming on as a substitute and scoring the first goal.

In the Junior League Cup Harry Theodorou and George Sammoutis’ Under 15 Silver suffered penalty shoot-out agony. In a ding-dong battle during normal time, the match eventually went to penalties after a 4-4 draw only for the Under 15 Silver to go out losing 4-3 in the shoot-out.

Robert Protei and George Constantinou’s Under 12 Gold drew 1-1 in a match where they controlled a lot of the game but didn’t really push on after they went 1-0 up in the early stages. A slping pitch didn’t help either but with the boys not really at top of their game they did very well to earn a point. Goal was scored by Giggis with Pablo Kalamaras named Man of the Match.

In the league, Mario Yiasemi’s Under 13 Gold lost 4-0 away against the unbeaten league leaders. It was a very close first half with not much in it but the opposition they took the lead towards the end of the half and then just before half time the Under 13 Gold hit the woodwork with their best chance and then went on to concede three more goals in the second half. Man of the Match was Luca.

Mike Koumi and Adam Broomfeld’s Under 12 White drew 4-4 in their league game. The boys started slowly and were 3-0 down at half time. However, in the second half they scored early to make 3-1 then a break away left them 4-1 down with 8 minutes left. An inspired comeback with determination and skilful football brought the Under 12 White a well deserved draw. Goals were scored by Georgie (2), Kevin and Davide with Chris named Man of the Match.

Mike Petrou and Kyri Haili’s Under 16 White had a bad day at the office as they lost 7-1 in the Middlesex Cup.

Finally, also in the Middlesex Cup, Mario Demetriou, Johnny Othona and Elvis Leon’s Under 13 Green won 5-1 away with Alex (2), Zack (2) and Anthony scoring the goals. Jacob was named Man of the Match.