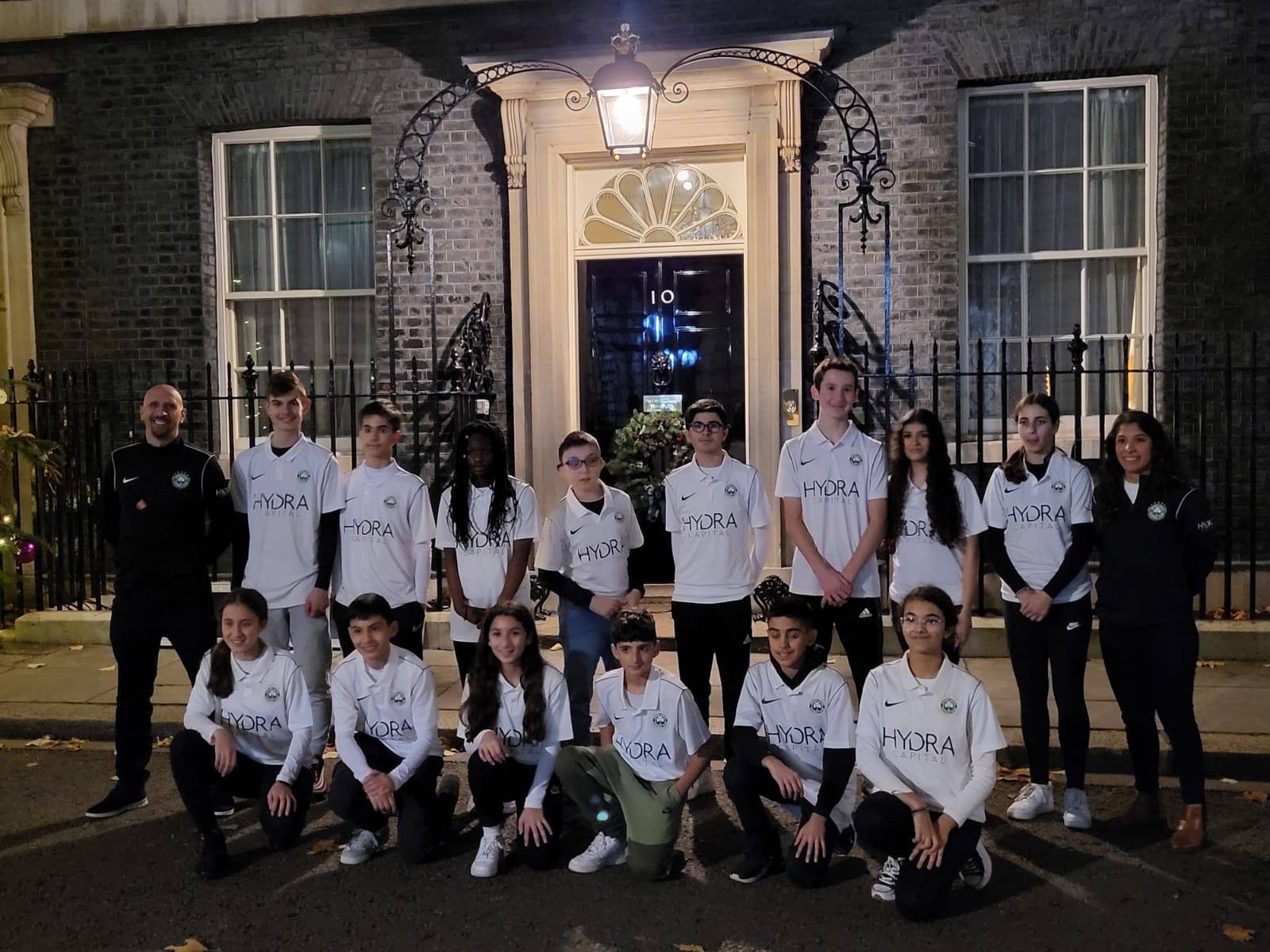 On Tuesday 29 November, England football fans all over the country were watching the England v Wales World Cup match at home, in pubs or at special event centres. For Omonia Youth FC, it was an altogether different as the club were invited to watch the match at 10 Downing Street with Prime Minister Rishi Sunak!

15 players and 2 members of the club’s committee watched the game with the Prime Minister along with pupils from Porth Community School in Rhondda Cynon Taff, Wales.

Prime Minister Rishi Sunak tweeted a photo from the evening and said: “Great to catch #WALENG this evening with @OmoniaYouthFC and Porth Community School. Well done England on a strong performance and for progressing to the knockout stages.”

“When the FA of England contacted me to ask if Omonia Youth FC would like to represent them at an event to watch the England V Wales match, at none other than 10 Downing Street, alongside Prime Minister Rishi Sunak, I was totally in shock, but delighted that we were chosen out of all the wonderful grassroots club across the country.

We obviously jumped at the opportunity and it was an absolute privilege, honour and a once in a lifetime opportunity for 15 of our young players who were aged from 12-15 years old, to not only watch the match at this iconic venue but also get to meet the Prime Minister. The memories will last forever. Everyone was so welcoming and it was lovely getting to meet some of the staff and children from Porth Community Schools in Wales.

Just entering the historic building itself was amazing; seeing all the photos of all the British Prime Ministers on the walls, to seeing the grand rooms and of course the iconic Number 10 door. The children all had the opportunity to speak with the PM and talk about our wonderful club as well as football in general (the PM revealed that he and his family are avid Southampton fans). The FA provided all our children with England shirts and the evening was capped off with a fabulous England win!

The Prime Minister also spoke to us adults and in discussion we emphasised how important grassroots football is for the mental wellbeing of children all over the UK, especially post Covid and how vital it is that the government continue to give money to organisations like the Football Foundation who help clubs maintain their pitches to provide football for young people every week.” What an incredible experience and one that will live long in the memory.

It has been an unbelievable few years for Omonia Youth FC. In 2019, the club celebrated its 25 year anniversary and in the same year were recipients of the Middlesex FA’s “Respect – we only do positive award.” In 2021, the club were named Middlesex FA’s ‘Club of the Year’ and also the ‘National Grassroots Club of the Year’ at an awards ceremony held at Wembley Stadium. This year, members of the club have had the opportunity to meet England manager Gareth Southgate, have England legend Gary Lineker, along with children’s author Ivor Baddiel, write about them in his new book and have many of their current and former coaches awarded for their long service. Omonia Youth FC is going from strength to strength and with 27 current teams, including 6 all girl teams, along with pan-disability inclusive football sessions and a thriving men’s team, the club’s commitment to their community is total, staying true to club’s ethos of ‘football for all’.