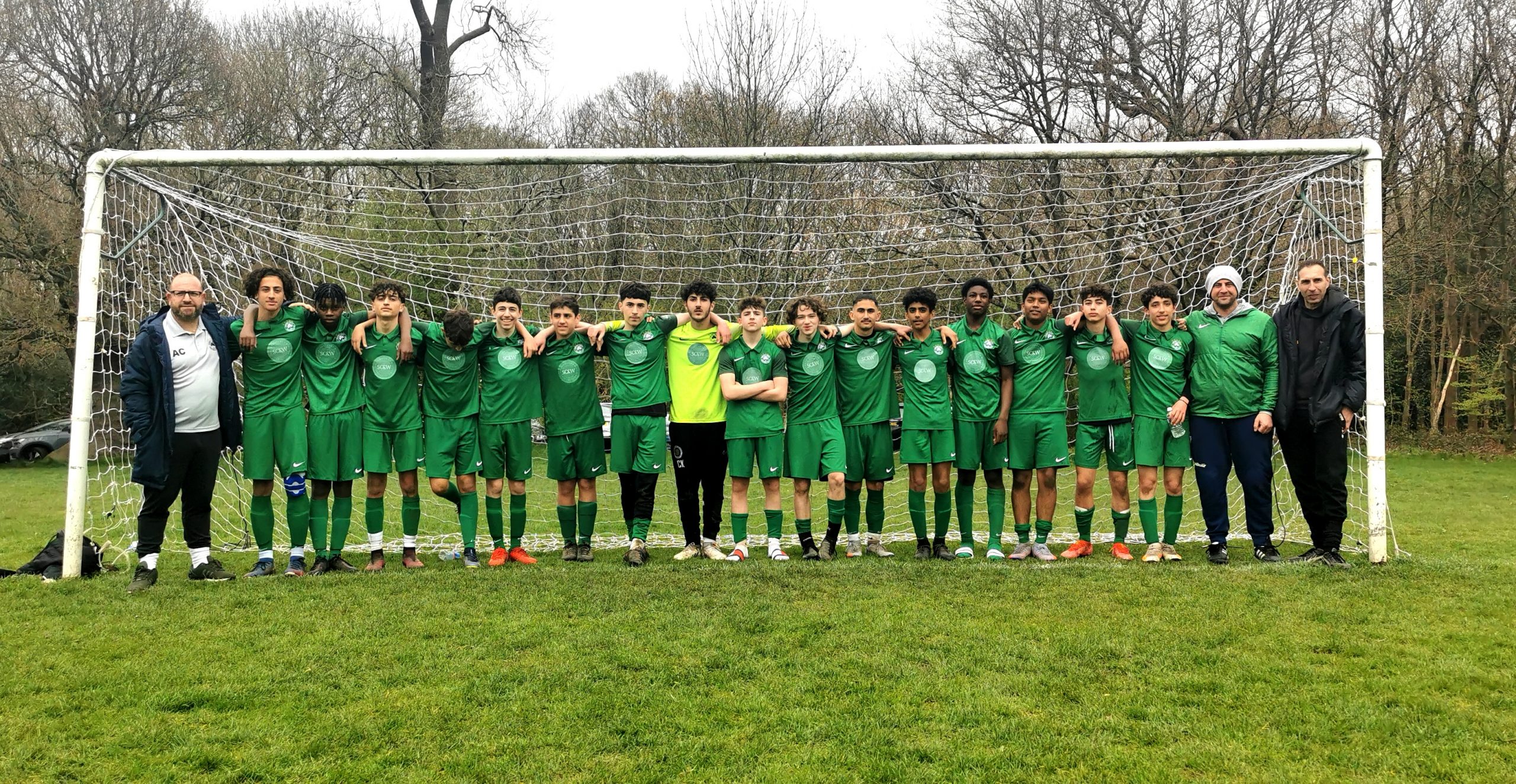 Community grassroots club Omonia Youth FC, sponsored by Spector, Constant & Williams, Vas Barbers and V Jewellers had plenty to celebrate last weekend, not least with the news that their Under 15 White team were crowned division champions. Needing just a point from their last league game, Alex Christofi and Serkan Nihat’s Under 15 White rose to the occasion and put on a champion performance, winning comfortably 5-1 at home. They set a fast-paced tempo from the very start, which made it difficult for their opponents. The Under 15 White dominated possession, scored five great goals. With only moments before the end of the match and winning 4-1, the Under 15 White won a penalty, which was taken and expertly dispatched by the goalkeeper to crown a fantastic display.  After the final whistle, there were fantastic scenes of celebration with players, coaches, parents and carers joining in. After the match, coach Serkan said: “…it was a pleasure to watch them and lovely to see the family members cheering them on. We are so happy for our team today and for their effort throughout the year. Their unity and hard work has paid off as they secured back-to-back promotions.” In 15 matches in the league, the team only tasted defeat twice, scoring 69 goals in the process. Well done and congratulations to all involved.

Goals were scored by Antony P, Yullian, Christos, Paulo and Michael. Man of the Match was awarded to Emirhan.

Sophia Karanicholas and Samuel Arthur Under 14 Girls continued their good form as they won 4-1 away from home. Turning up to the game with 11 players meant that playing together as a team was even more important. It took the girls a while to get going and they went 1-0 down early on. However, the girls again showed their powers of recovery and their renowned resilience to storm back to score four unanswered goals thanks to a wonderful team performance. This was the first game where the team were not reliant on individual moments of brilliance and dribbles; instead, the girls played an incredible passing game and, in many cases, took only three touches on the ball to accelerate the play. While the whole team deserved praised, coach Sophia reserved specific praise for to Gina and Mea for a sensational second goal which saw Mea’s precise cross finished with one touch by Gina. Other goals were scored by Gina again and two from Shekhinah. Player of the Match was awarded to Sophia T who showed composure on the ball, incredible decision making and spread the play well but also demonstrated great confidence by taking on a few players.

Zeno Vryonides, Mario Georgiades, Elias Neocleous and Vas Simou’s Under 14 Green were 6-1 winners as they ended their opponents long unbeaten run in spectacular fashion. Even though they were missing some key players, the boys stayed strong and composed and worked well going forward with pace. Plenty of creative play got them a well-deserved win. Goals were scored by Alek (3), Andoni (2) and Michael. Three players were named as Man of the Match as coach Zeno could not separate their contribution. They were Andrew S, Angelo G and Efe.

Kerem Denizer Under 12 Green were involved in a 10-goal thriller and despite losing, coaches and players enjoyed the match and the many positives that came with it. Having gone into a 2-0 lead, the Under 12 Green look set for a positive result to match a positive performance but the opposition were equally good in a well-contested match. The match was level at 2-2 and then also at 4-4 before the opposition scored two late goals to take all three points. Goals were scored by Jamiah Edwards (3) and a stunning free-kick from Huseyin-Emre Denizer. Man of the Match was awarded to Leo Z because of his constant running and his tenacity in getting an assist to get his team back in the game. Best Contribution was given to Kristianos D who tried a new position as a defender, embraced the opportunity and was positive throughout.

Chris Gregoriou’s Men’s team, who are sponsored by Crown Mobile Tyres and The Master Locksmith, knew a win on Sunday would see them get to a Cup Final, the first for the fledgling Men’s Team. Alas it was not to be. A slow start which saw the team play their most ineffective 45 minutes of the season saw them put themselves under constant pressure by giving the ball away in silly areas time. Cup games under pressure can affect teams in different ways and the Men’s Team found this out the hard way on Sunday by giving away two goals and by failing to create enough chances of their own lost 2-0. As this cup competition is played on a league format, the Men’s Team do have another chance to reach the final, but they will have to win their last game to confirm it. Should you feel enthused and want to know more about Omonia Youth FC, you can contact the club at omoniayouthfootballclub@hotmail.com, via the contact page on the club’s website www.omoniayouthfc.com as well as following the club on twitter @OmoniaYouthFC and Instagram @omoniayouthfc1994.