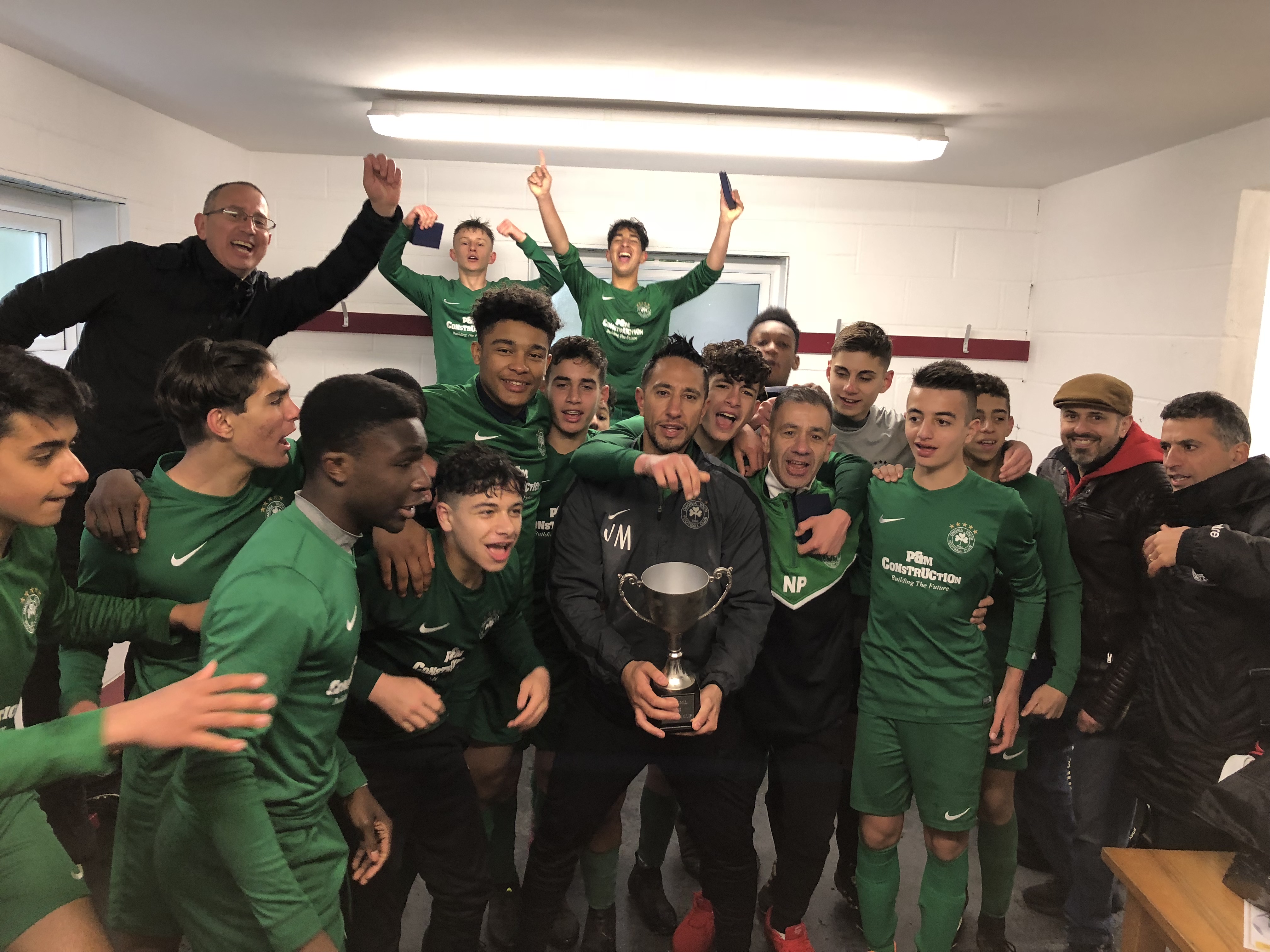 Omonia Youth FC Under 15 Green completed the first leg of a treble trophy attempt as a dominant second half performance saw them win the Mid Herts League Cup.

The match was played on Saturday at Potters Bar Town Football Club where a large Omonia Youth contingent came to support the team. Cup Finals are always tight matches and this was no different. Even though Omonia Youth U15 Green had several opportunities to take the lead in the first half, they could not convert these chances into goals and both teams went into the half time break goalless.

Omonia Youth came out for the second half intent on ensuring their football and performance didn’t go unrewarded and ten minutes into the second half an in-swinging free kick found Clinton Beokojie in the penalty area who glanced his header into the bottom corner of the net giving Omonia Youth a deserved lead. Not long after George Stasi doubled the lead with a skilful turn to get away from a defender and he then expertly chipped the ball over the goalkeeper from 25 yards out. This gave Omonia Youth breathing space and for all the attempted pressure from the opposition to get back in the game, Omonia Youth continued to play their football and at the final whistle were deservedly were jubilant.

To win the cup the Under 15 Green played five rounds in all, scoring 20 goals and only conceding 5. Man of the Match for Omonia Youth was Mikey Dionisiou who gave a commanding performance in central midfield. He always had a yard of space to work in and looked after the ball brilliantly ensuring his team were always in control.

The side is coached and managed by Dean Dionisiou, Varnava Michael, Mario Kleopa and Neo Petrides and having won the League Cup they are still in a good position to win the Mid Herts Premier League title and they are also in another Cup final too.

After the match, Dean praised the team’s efforts and the journey they have been on:

“Winning the cup final is reward for the coaches, managers, parents and the entire Omonia Youth FC family. The majority of the team have together since the age of 5. As a coaching team we have worked hard to develop the players, encouraging them to be brave on the ball thus developing their technical ability and to play football on the grass and on Saturday it all came together. We did it our way!”

Well done to all the players, the coaching staff and the supporters who came to watch the game. One down, two to go!