Omonia Youth FC Under 15 Green into the Cup Final 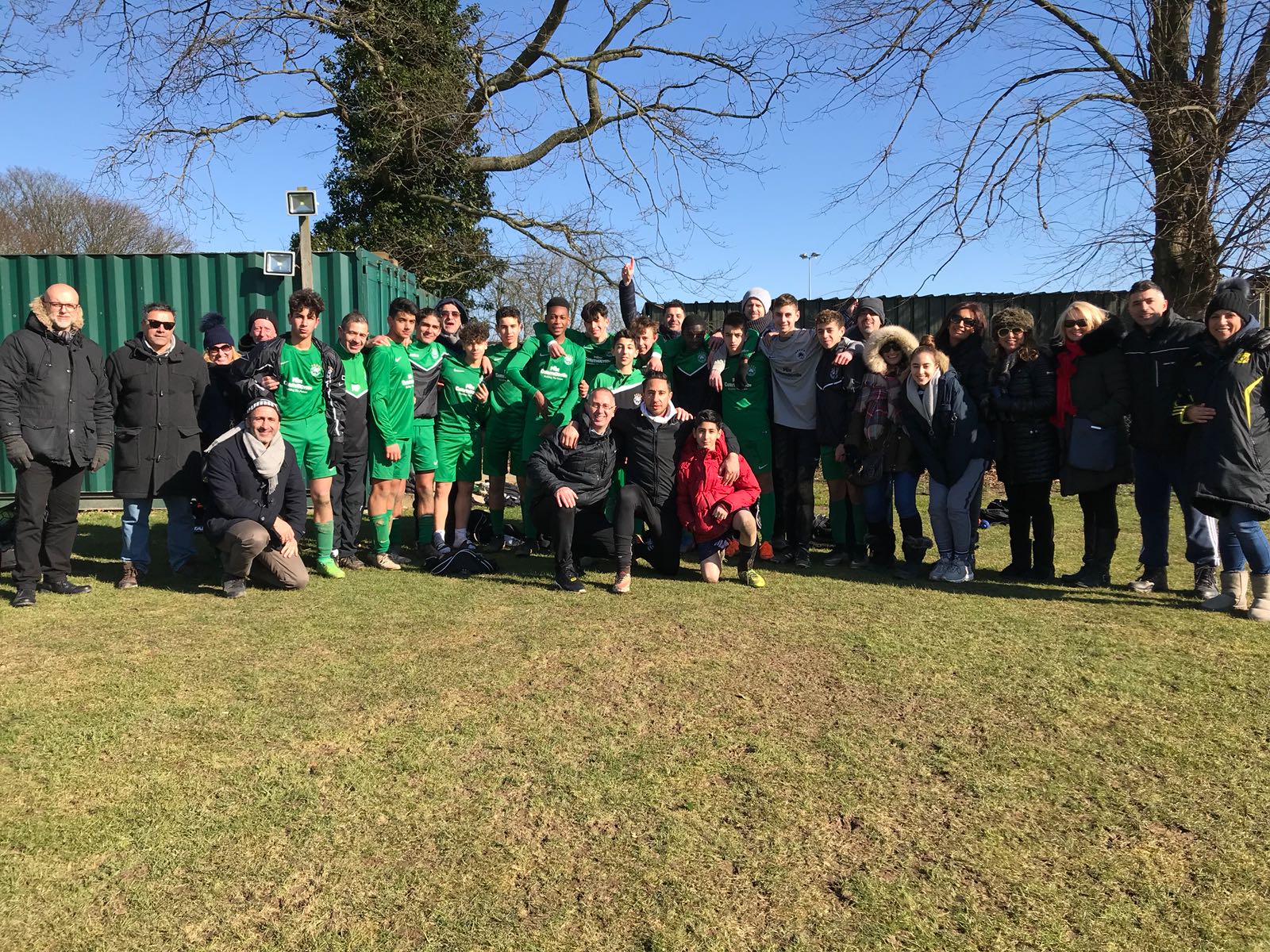 There were plenty of fantastic performances from the many teams of community football club Omonia Youth FC, sponsored by P&M Construction UK Ltd, but one result stood out with the Under 15 Green winning their Mid Herts Cup semi-final and booking their place in the final!

In what turned out to be a great day for the players a tireless display demonstrated all the attributes required to get past a difficult opponent and set up a wonderful occasion later in the season.

A very tight first half with neither creating many goal scoring opportunities, it was the under 15 Green who broke the deadlock with 10 minutes of the first half remaining. A free kick whipped in Mikey Dionisiou was headed past the stranded goalkeeper by one of his own defenders.

The second half played out much like the first however Omonia came under severe pressure for 15 minutes of the second half until the team showed resilience and fortitude to play themselves back in to the game creating 3 clear cut chances. The Under 15 Green could not add to their goal tally and having kept a clean sheet, advanced to the final where they will play Stevenage at Barnet Football Club at a date yet to be announced. A fantastic achievement by all involved. Man of the Match was awarded to Clinton Beokojie Huge congratulations to the players and the management team of Dean Dionisiou, Varney Michael, Neo Petrides and Mario Kleopa.

In the WFL Spring Shield Mario Stavrou and Tony Kromides Under 12 White won comfortably 3-0. The whole team play superbly and put on an outstanding performance. Goals Scored by Louis, Alex and Matthew. Man of the Match was Sasha.

In the Under 13 Spring Plate Nick Lingis and Mario Christoforou’s Under 13 Green played out an exciting 3-3 draw. Goal scorers were Georgios Christoforou, Raul Amin and Jack Anastasi who was also named Man of the Match.

In the Under 12 Spring Cup, Savvas Zavro’s Omonia Gold were dfeated 5-2 but the scoreline was not a reflection of the team’s performance. Savva said: “The boys battled to the end creating excellent chances which couldn’t be converted and I’m very proud of the team.” Goals were scored by Ky Zavros (2) with Max Albercht named Man of the Match.

In the Under 13 Spring Cup a cracking cup tie saw Michael Pieri’s Under 13 White narrowly lose a five goal thriller. After coming from behind to lead 2-1 their opponents then scored twice to take a 3-2 lead. Throwing everything at their opponents and missing several chances in the last 10 minutes including hitting the bar, the ball juist wouldn’t go in. Goals were scored by Mohammed and Alfonso with Sami Hristov named Man of the Match.

Nick Georgiou and Kenny Gregori’s Under 15 White lost their league match 4-1 with Peter Michael scoring the only goal and Apostolos Tziatzios named Man of the Match.

In the Under 12 Spring Cup Omi Omirou’s Under 12 Green kept their winning run going with a 2-1 win. Leo Ioannou and Jamal Mohammed with the goals and Billy O’Sullivan named Man of the Match.

George Sammoutis and Harry Theodorou’s Under 13 Silver showed true grit and determination to come back from 1-0 down to win 2-1 against opponents from a division higher in Spring Cup. Goals were scored by Oscar and Mehmet wityh Saif named Man of the Match.

Kyri Georgiou’s Under 16 Green finally a run of defeats with a spirited display coming from 2-0 down to go 3-2 up before conceding late on to draw the match 3-3. It was a performance which belied their recent form and the positive attitude showed by the boys bodes well for the rest of the season. Goal scorers were Solos, Demitri and Jamal with Ellis named Man of the Match.

The Under 13 Omonia Girls team lost a closely contested league match today against the league champions who have won all their games. The Under 13 Girls played superbly to restrict their opponents to a narrow 1-0 lead at half time with some brilliant defending from Zoe and great wing play from skipper Andrianna. Stand in goalkeeper Shaamalai had a ‘blinder’ on her debut, including one finger-tip save in the top corner. A very proud coaching team were happy to report the other player making her debut was Louise Nottage who narrowly missed a chance to score. Two breakaway goals made the final score a 3-0 defeat but massive improvements are being made week on week. Joint player of the match was Andrianna Stavrou and Sophia Zavrou Blackstock, the latter using her right foot more in one match than in the whole season thus far!

The coaching team of George Pantellides, Sophia Karanicholas and Alex wanted to invite anyone who is available to go and watch the team’s next two games which will be played at home on March 11th and 18th. For more details please contact the club.