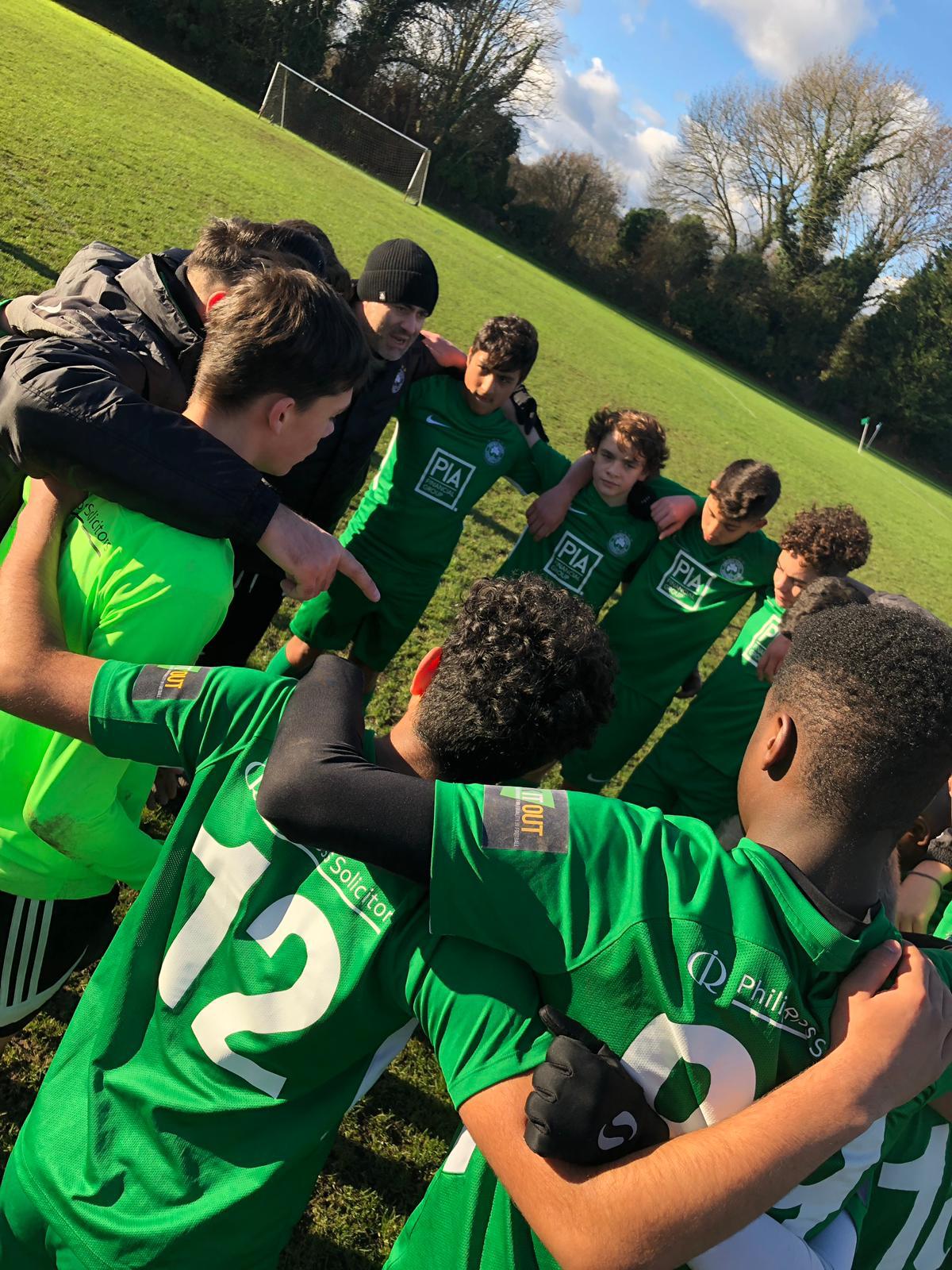 Three teams from community youth football club Omonia Youth FC, who are sponsored by PIA Financial Group and Philip Ross Solicitors, were in County Cup action last Sunday. Two teams progressed to the quarter final while the other suffered penalty shoot-out heartbreak. Other teams were in League action.

Panos Papa-Michael, Elia Constanti and Andy Michael’s Under 15 Gold pulled off a stunning victory to beat their opponents from the EJA League and book their place in the Middlesex Cup quarter final.

In an amazing game, the Under 15 Gold were thoroughly deserving of their 5-2 win as they were watched by a large crowd at Enfield Grammar School 3G pitch. The Under 15 Gold equipped themselves very well from the beginning and created some clear chances throughout the first half but they half ended a goal down. The second half was very competitive, with the Under 15 Gold playing the better football against a very athletic and physically strong opponent. Unfortunately Omonia again missed good chances and then went a second goal down. With five minutes to go Under 15 Gold were awarded a penalty to make it 2-1 and then in the last minute scored another penalty to finish the game 2-2.  The Under 15 Gold were now absolutely buzzing and scored a wonderful goal from a great back to front passing move to go 3-2 up. Straight from kick off the Under 15 Gold nicked the ball and won a third penalty which was again scored. Just before the end of the first half of extra time they scored again and the game finished 5-2. Scorers were Youseff Habibi (3 pens), Andy Polycarpou and Andrew Christofi. The whole team were awarded Man of the Match for the heart and desire they showed which was followed by technical excellence throughout.

In the Under 14 Derby, Nick Lingis and Mario Christoforou’s Green took their place in the last eight of the Middlesex County Cup as they won 1-0, beating Jimmy and Chris Mousicos’ Gold. Joe K got the decisive goal as the Under 14 Green outfought, outthought and outplayed their Under 14 Gold. Under 14 Green Man of the Match was awarded to the whole team while the Gold’s Man of the Match was goalkeeper Lewie Francis who kept his team in the contest with some incredible saves.

Finally in the County Cup, Stel Loizou and Omi Omirou’s Under 13 Green saw their match go all the way to a penalty shoot-out. In a pulsating match of high energy and commitment, the Under 13 Green had to come from behind against a team who had not been beaten for over a year. It was a significant performance for the Under 13 Green and were it not for a stunning last minute save from the visiting goalkeeper they would be celebrating a win. 3-3 was the score after extra time with Jamal M (2) and Leo I getting the goals. The Under 13 Green lost 5-4 on penalties with Louis L named Man of the Match. Both Stel and Omi were rightly proud of their team as the lottery of penalties was all that stood between them and a second successive appearance in the quarter final of the County Cup.

In League action, Nick Georgiou’s Under 16 White won 4-3 away from home in what was described as a great, spirited performance from all the boys who played under very difficult pitch conditions. Despite being a goal down at half time the boys put in the work and played some excellent football to turn the game around in the second half showing they were the stronger team. Some great Individual performances as well as good teamwork. Goals were scored by Peter Michael (2), Theo Stavrou and Apostolos Tziatzios. The whole team were named Man of the Match.

Chris Gregoriou and Andy Kyriacou’s Under 18 White won their league game 1-0 in a closely fought match. The Under 18 White were the better team and they got their reward after going close on many occasions including hitting the post in the first half and creating many other chances in the second. Goal was scored by Michael Patsias with Chris Yiannitsarou named Man of the Match who was a threat throughout the whole match.

George Sammoutis and Harry Theodorou’s Under 14 Silver won again, this time 2-1 away in what was a really tough game in a performance full of character and grit. The boys had to be incredibly resilient and concentrate throughout and having to withstand a strong wind in a difficult 15 minute spell in the second half when the opposition equalised. However the Under 14 Silver stuck at their task and went on to get the winner against a strong side both physically and in terms of their football. Scorers were Gabriel  and Oscar with Mehmet named Man of the Match.

Mario Yiasemi’s Under 12 Gold suffered their first league defeat of the season losing 4-3 in a game of missed chances in the first half. Arda scored a hat-trick and was also named Man of the Match.

A respectable performance by Savva Zavros and David Poncia’s Under 13 Gold which saw them maintain their unbeaten record in the League with a 4-1 win. Ky Zavros (2), Leo Capsalis and Valantis Zachariou were the scorers.