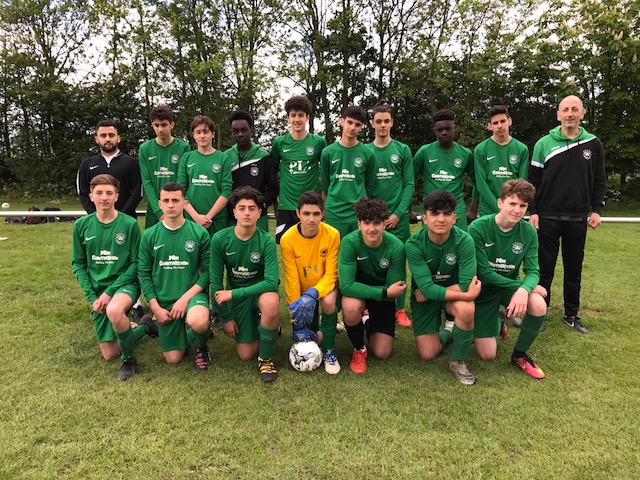 Community football club Omonia Youth FC, sponsored by P&M Construction Ltd, has reason to be proud this week as it was notified by the Middlesex Football Association that it has been nominated for an FA Community Award.

The FA Community Awards are split into several categories and each category is judged at a county and a regional level before a national shortlist is created from the regional winners of each category. The club has been invited to the Middlesex FA Annual Presentation Evening this Friday.

This annual event aims to reward and celebrate the preceding season’s work and achievements of clubs, leagues, players, coaches, administrators and volunteers that make up the Middlesex Football Community. The awards that will be presented on the night include the FA Community Awards, Middlesex FA Awards and Representative Team Awards.

Chairman Michael Pieri was rightly proud of the nomination and he said: “It is always nice to be recognised for the positive work we do within our community and this nomination is testament to that ethos and of course the selfless work of our volunteers; the Management Committee, the Trustees Committee, the coaches and managers.”

Elsewhere, the club had another reason to celebrate as Under 14 Green striker George Stasi was congratulated by the Mid Herts Rural Minors League on winning the Golden Boot Award for the U14 Premier Division this Season.

The Golden Boot Award is awarded to players who scores the most goals in their league matches in their Division and George scored 45 goals. George and his family have been invited to the League’s annual Presentation Day to receive his award.

Chairman Michael Pieri praised George’s achievement. “On behalf of the club, I would like to congratulate George on a fantastic achievement. Being top goal scorer in a very competitive league of high quality is testament to his personal qualities but also represents what an outstanding season the team have had. I have had the pleasure of watching them many times this season and I am proud they are part of our club.”

On the pitch, the Under 14 Greens played the runners-up of the West Herts Premier Division and ran out 10-1 winners. Not surprisingly George was on the scoresheet again, scoring seven goals to take his season tally in all competitions to an incredible 59! Mikey Dionisiou, Mario Stavrou and Angelo Michael scored the other goals. Man of the Match was awarded to Michael Kleopa for a calm, composed, master class of performance at centre half.

Elsewhere, Omonia Youth FC teams were involved in tournament action. In the Under 14 age group at the annual Cuffley Tournament, four teams were entered with two teams getting as far as the quarter finals. The action was entertaining and the quality impressive.

Starring for Omonia Youth FC was Kyri Georgiou’s Under 15 Green team who entered two teams. One team got to the quarter finals and got knocked out on penalties while the other team got all the way to the final.

What was impressive was the camaraderie and togetherness as the other Omonia Youth FC teams stayed to watch the final. The support was greatly appreciated with Kyri saying “A huge thanks to all who stayed to watch and support the team.”

In the final, the U15 Green played a large part of the game a man down but managed to take the game to penalties where they unfortunately lost 5-4. In all it was a wonderful advert for the club.