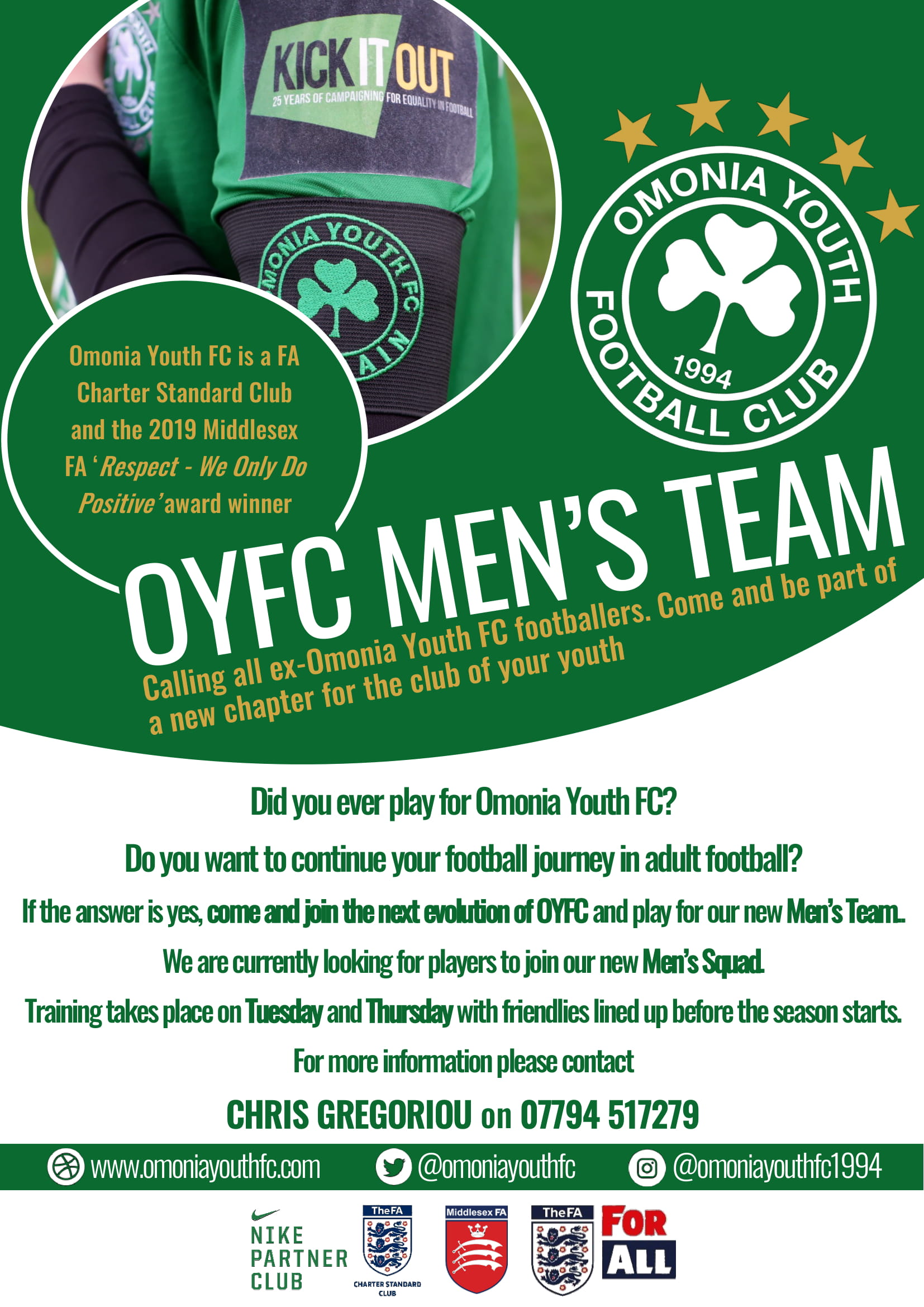 Where do grassroots footballers who finish youth football at Under 18 go if they want to continue to play?

With an abundance of adult leagues, there is a wealth of choice. Certainly, in our community KOPA (Cypriot Football League UK) has been the league of choice for many young footballers, eager to move into adult football. Established KOPA teams have for years sought out youth football teams for new players and it is no surprise that Omonia Youth FC are the most represented team in KOPA, with many ex-Omonia Youth FC players currently turning out for many KOPA teams.

That task may have just got a little more difficult for KOPA teams, as the predominant grassroots youth football club in our community, Omonia Youth FC, will this season take the plunge by launching a men’s team.

It is certainly an exciting venture. Omonia Youth Chairman Michael Pieri said: “…the genesis of the idea came from the players from one our Under 18 sides. With last season unfortunately cut short due to the Covid-19 pandemic, there was a clear message from many of these players that they wanted to continue to play football and they wanted to continue to play for the club. We’ve never had an adult team but there was such a drive from the players, the manager Chris and with the incredible support from the club’s trustees, the idea grew and grew. It is extremely exciting and for me this is the next evolution of the club as we continue to aspire to the club’s ethos of ‘football for all’”

Indeed, over the past few years the club has shown tremendous growth and has never had so many teams. This season the club will have over 30 teams including three all-girl squads and disability football sessions.

Where the team will play is still unknown but there is a clear desire to stay in the community.

Manager Chris Gregoriou, whose company Crown Mobile Tyres, will be sponsoring the team along with Athletic Development Club, CJAZ Consulting, Ramek Asset Management and The Master Locksmith said: “We have been delighted by the response of KOPA to our interest and are excited to be making this progressive step for our youth looking to continue their football with club”.

Chair of Trustees Andy Charalambous was equally delighted with the new venture. He said:

“It is with great pride that we announce the launch of our first OYFC men’s team. The idea has been discussed over the last few seasons that we need to provide a platform for our players who start their OYFC journey at a very young age and finish at U18s. We saw this as the perfect opportunity have a men’s team to provide a long overdue platform for our youth players to enter men’s football under the OYFC club environment that they have grown up with.”

If you would like to attend a training session for the new men’s team, please contact Chris Gregoriou on 07794 517279.