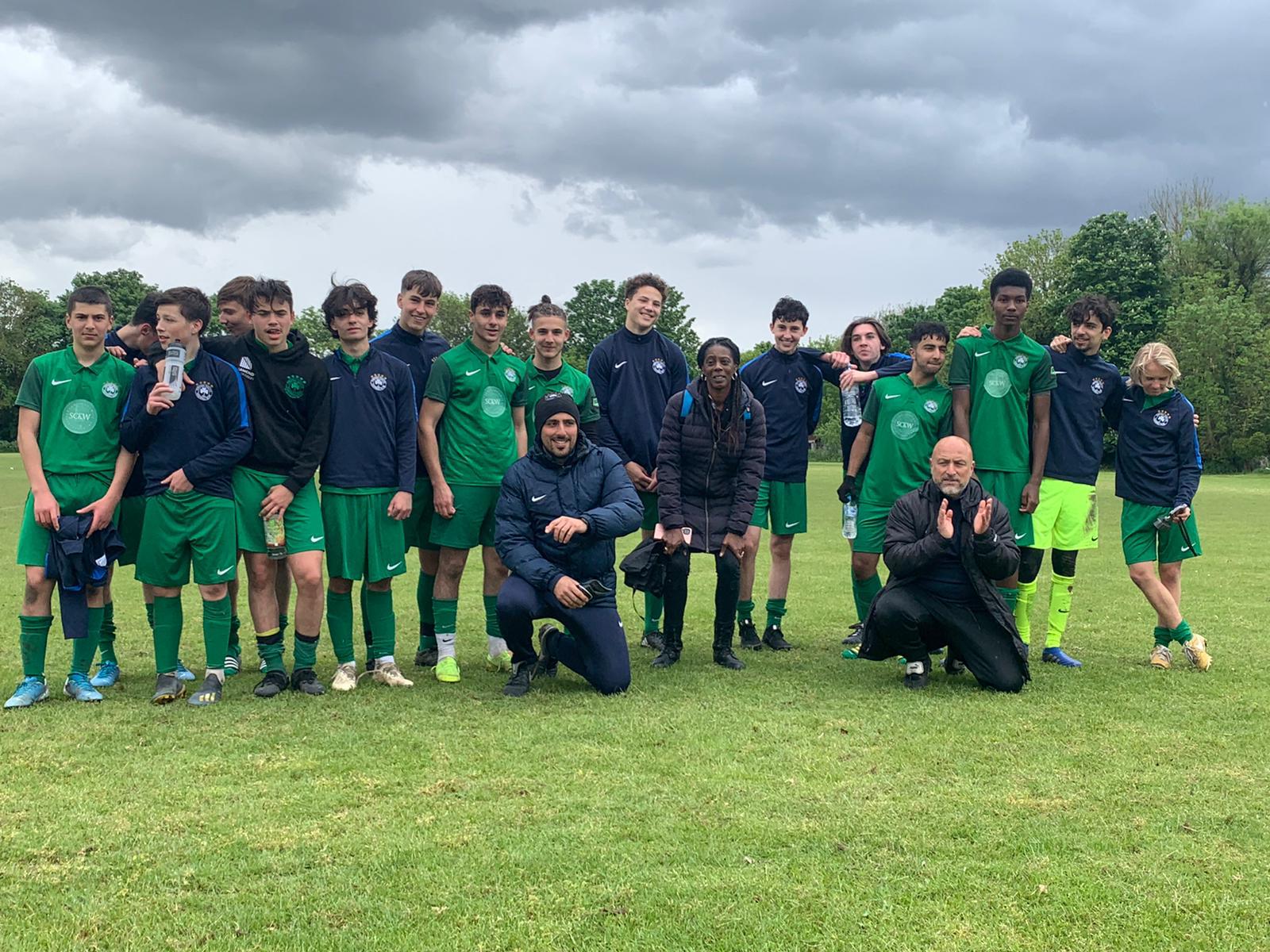 Chris and Jimmy Mousicos’ Under 16 Gold, who play in the top division, needed a win in their last match to secure at least a share of the title. Playing at the Radiomarathon Centre in Enfield, the club’s spiritual home, the Under 16 Gold got into their stride early on and once they scored the first goal they ran out comprehensive winners to secure the title. It is a fabulous achievement for the team, many of whom have been together for many years. Louis G (2), Kristian, Ziya, Vansh and Lewie scored the goals in a 6-1 win. After the match, manager Chris said:

“This season we started with 9 players and ended with 17. As with all of us, Covid interrupted the season but on top of that we suffered the devastating blow of losing Ella, one of our originals’ baby sister at just 13 years of age. Today was the 6-month anniversary of her passing so we dedicate this title to Ella, Jay and the family. The boys were ruthless and as one today. Great memories.”

Chairman Michael Pieri, whose own team are in the same age group said this: “Together this team have overcome many hurdles over the years but they stayed true to a philosophy of wanting to coach and develop players, playing aesthetically pleasing football that provides them the platform to be brave on the ball. I am very proud of their achievement and this is a title that vindicates a positive approach to grassroots football. Congratulations to Chris, Jimmy, the parents and of course the players.”

While one team was celebrating becoming champions, another team was also celebrating as Nick Georgiou’s Under 18 Gold completed their Omonia Youth FC journey. Playing a double header, the Under 18 Gold lost one 2-1 match but won the other one 3-1 to end their Omonia Youth FC careers with a win. Scorers on the day were Styli Chrysostomou (3) and Jack Nash with Anthony Gregori named Man of the Match.

In what was understandably an emotional day, Nick thanked the players and their parents for their commitment. There are players in the squad who have been with the club since the development stage at Under 6 and under 7. Nick said: “I am very proud that they played so well in this last game and I sincerely hope they continue to play the sport as adults. I would like to thank the club, the committee and all the managers for all these years of support. Keep up the amazing work you are doing.”

Sophia and Samuel’s Under 13 Girls were excellent as they showed their competitive spirit in a very entertaining game to watch. The unity and team spirit was evident throughout, especially the willingness from the girls to play in different positions and do their best for the team. Despite a difficult start, the girls were able to withstand great pressure from a team who pressed high up and were rewarded with a goal from a great team effort. In the second half, the Under 13 Girls were challenged to try and get the ball in the oppositions half with only two passes; this was done to encourage them to play forward and to do so quickly to take advantage of the opposition’s high pressing. They executed this very well and incorporated many of the passing exercises they have been focussing on in training and ended up dominating the second half. It was a brilliant team effort! Player of the Match was Anika with Gina Zavros getting the goal.

Adam Demetri and Evagoras Mandrides’ Under 15 Silver played their final home game of the season against the divisional champions with second place up for grabs. The boys were on fire from the first whistle and totally dominated the game to run out comfortable 5-0 winners. Goals were scored by Nicola (2), Brodie (2) and Agim. Man of the Match was awarded to Ru.

Tas Georgiou’s Under U14 Green were only losing 1-0 at half time but an injury to the goalkeeper made the second half difficult and they eventually lost 7-1. Jamie Gordon got the only goal with Jacob Roberts named Man of the Match.

Mike Koumi and Adam Broomfeld’s Under 13 White had their final games, and with the title already secured, there was little to play and it showed!  There was a marked lack of intensity or teamwork and when you add the fact the team tried different formations and players in unusual positions it was no surprise that the team’s usual fluidity was missing. They lost both games: 4-2 and 3-1. The goals were scored by Nick, Chris and Davide with Chris and George B named Man of the Match.

Chris Gregoriou’s Men’s team, who are sponsored by Crown Mobile Tyres, Athletic Development Club, The Master Locksmith, and RAMEK asset management came up against a very strong side but ultimately lost 5-0. Dave Huntingford was named Man of the Match for another strong performance playing as a sweeper keeper and was solid in his handling too. Despite the defeat, the team retained their third place in the league. 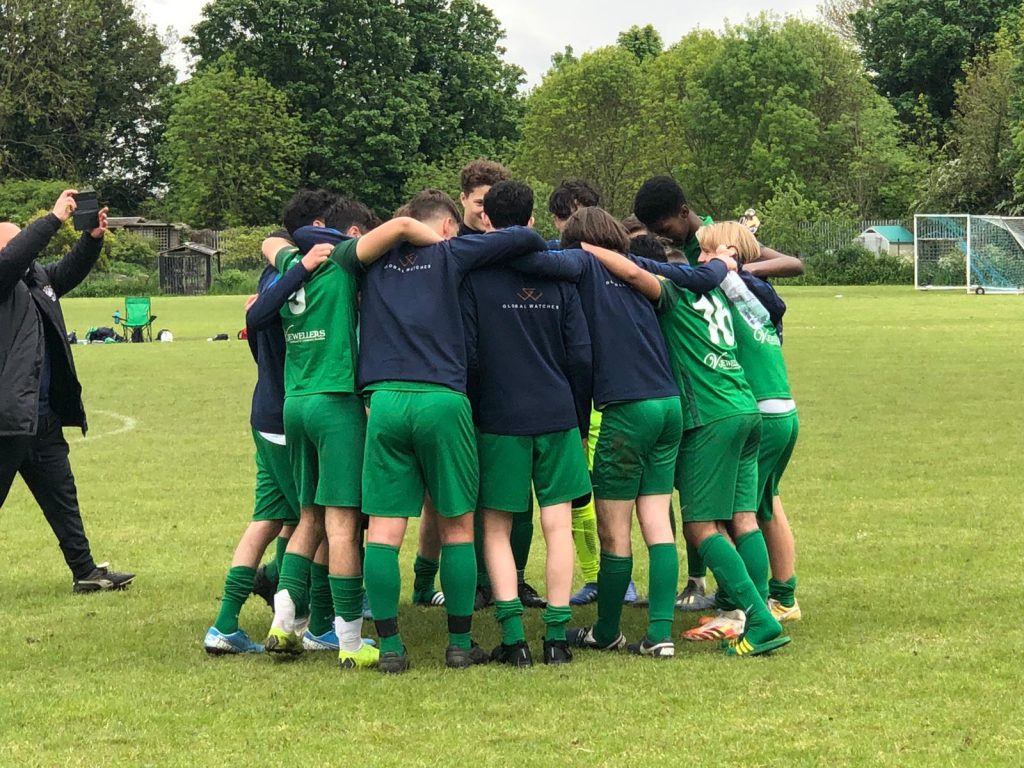 Togetherness. Application. Dedication. Passion. The Under 16 Gold are 2021 Champions!