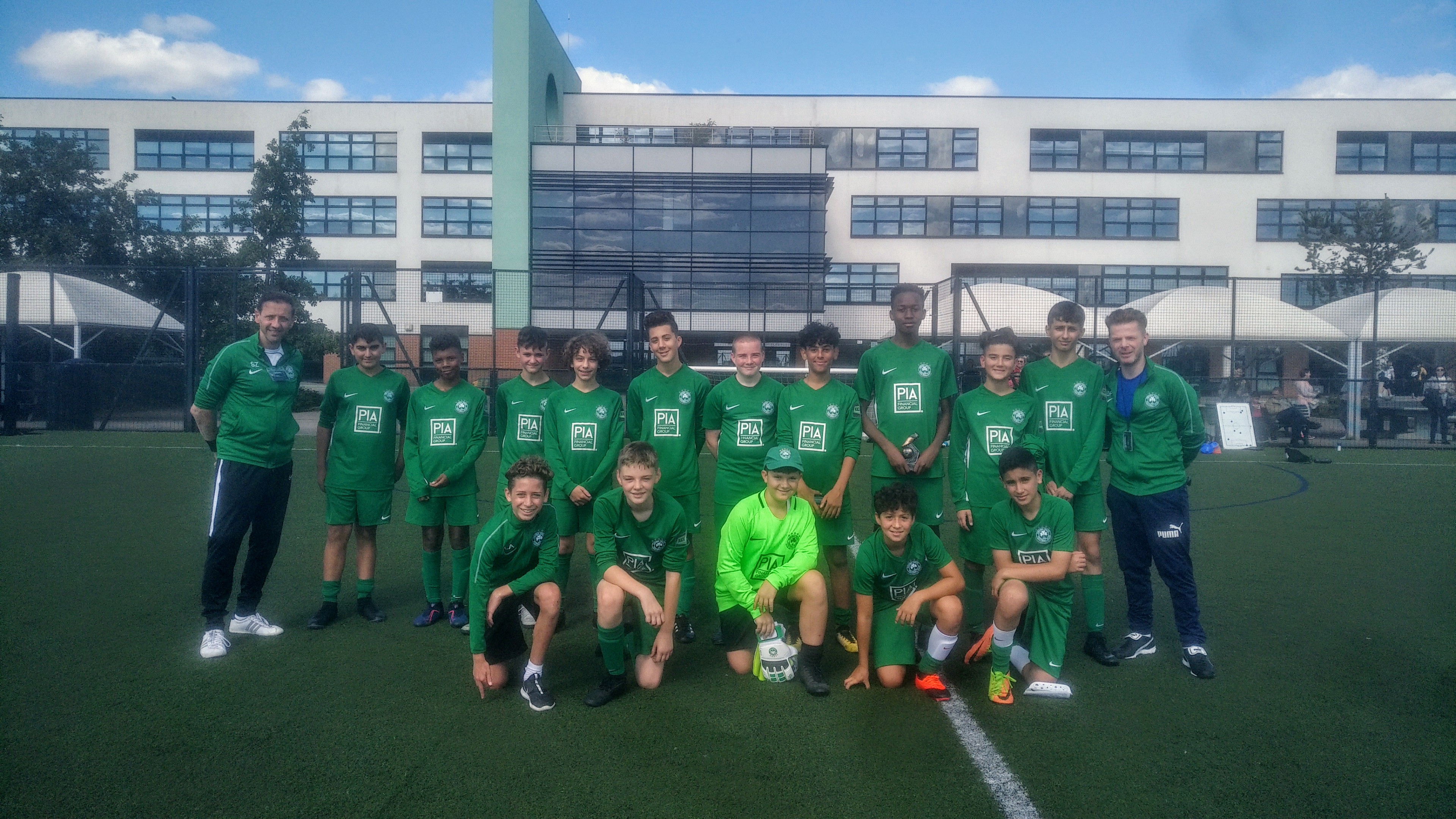 After a long summer break and last season but a distant memory, the young teams of Omonia Youth FC endured and enjoyed a variety of emotions on their return to match day action. With the club’s traditional home at the Radiomarathon Centre in Enfield still not ready after a summer of reseeding, home games were played all over the borough.

The club celebrate their 25 Year Anniversary in 2019 and season 2019/20 is their 25th, an important milestone that will be celebrated this season and it was the perfect start for many teams, not least Harry Theodorou and George Sammoutis’ Under 15 Silver who got their campaign off to the perfect start with a confidence-boosting 10-2 cup.

Michael Pieri’s Under 15 White could not follow suit and went out of the Cup having lost 5-4 in an exciting game. A dominant first half performance from the Under 15 White should’ve yielded more  than the 1-1 half time score line but a lapse in concentration right on half time gifted the opposition their only shot at goal to level it up. A mistake-ridden second half led to the opposition winning the tie with only minutes to spare. The boys played very well but only having 11 players on a warm day and playing 80 minutes for the first time didn’t help at all. Carrying two injured players for last 15 minutes really cost them. Goals were scored by Emmanuel Sarpong (2), Sami Hristov and Yianni Sophocleous with Emmanuel named Man of the Match for a great debut and two excellent goals.

Chris and Jimmy Mousicos’ Under 15 Gold started another campaign in the top division with a 2-2 draw.

Zeno Vryonides Under 12 Green only 9 players available against very good opposition but put up a great performance as the boys never gave up to win 5-4. Goals from Alec P (3) and Nico (2).

Michael Petrou and Kyri Haili’s Under 16 White got their season off to a positive start by winning 7-2. The boys played excellent passing football and played as a team. Goals were scored buy Louis Petrou (3), Eden Zadka, Valenti, PG and Alex Papaloizou. Louis was named Man of the Match.

Barrington Dutton’s Under 16 Green also won their opening match, playing some great football on Barnet FC first team’s training pitch, which led to some tired legs at the end of the game on an immaculate but large pitch. Goals from Alexi G (2), Julian, Louis O and Nicholas. Jacob was named Man of the Match.

David Poncia, Fano Shiamishis and Savvas Zavros Under 14 Gold gave an impressive performance which saw some very good whole team football with excellent communication and understanding between the team ending in a 3-1 victory. Goal were scored by Louis Brown, Valantis Zachariou and Man of the Match Jonathan Akinyemi

Mike Koumi and Adam Broomfield’s Under 12 White were knocked out of the cup after losing 5-1 whileMarios Yiasemi’s Under 13 Gold were emphatic winners winning 10-4 in their first ever 11-a-side match. Goal scorers were Man of the Match Arda (5), Dhiren (3), Demos and Muzzammil

Chris Gregoriou described his team’s start to the season as “…a disaster…” Being only able to fueld 11 players due to registration issues, too many individual errors saw them go into half time 3-1 down. After suffering several injuries in the second half the final score of 7-1 told it’s own tale. Nick Gregoriou was the goal scorer with Andre putting in a captain’s performance to be named Man of the Match.

Mario Demetriou, Johnny Othona, ELivs Leon and Tas Georgiou saw their Under 13 Green play their first match in the top division and come away optimistic after only losing 4-2 to last season’s runners up. The boys played with passion throughout the game but they ran out of steam to concede two late goals. A great match to watch as both teams showed good spirit. Goals were scored by Nat and Theo with Ben named Man of the Match.

Robert Protei and George Constantino’s Under 12 Gold beat a team a division higher than them 7-4 in the cup. It was a satisfying result as the boys were very mature in their positioning and work off the ball which really pleased the coaches. 3 goals by Antony Michael and 1 goal and 2 assists for Giggis Evangelou who also did fantastically well defensively against a really good winger.

Alex Christofi and Serkan Nihat’s Under 13 White lost an exciting match 7-6. Having started slow they went into half time 4-1 down but in the second half put on an amazing comeback both in the football being played and their positive attitude. They worked so hard to get it back to 6-6 but unfortunately a goal in the last second of the game gave the victory to the away team. Goals from Man of the Match was Anthony P with four goals.

Dino Savva and Nick Georgiou’s Under 18 Gold lost 1-0 in their cup tie. Despite creating plenty of  chances they could not score and they also suffered some unfortunate injuries during the game. Man of the Match was Harry Vassiliou.

Kyri Georgiou’s Under 18 Green started the final season with a brilliant 7-1 win in a match they dominated throughout. Man of the Match Yianni Polycarpou grabbed a hat trick with Antonio Panayiotou (2), Andrew Kirtsides and Denis Gradica also on the scoresheet.