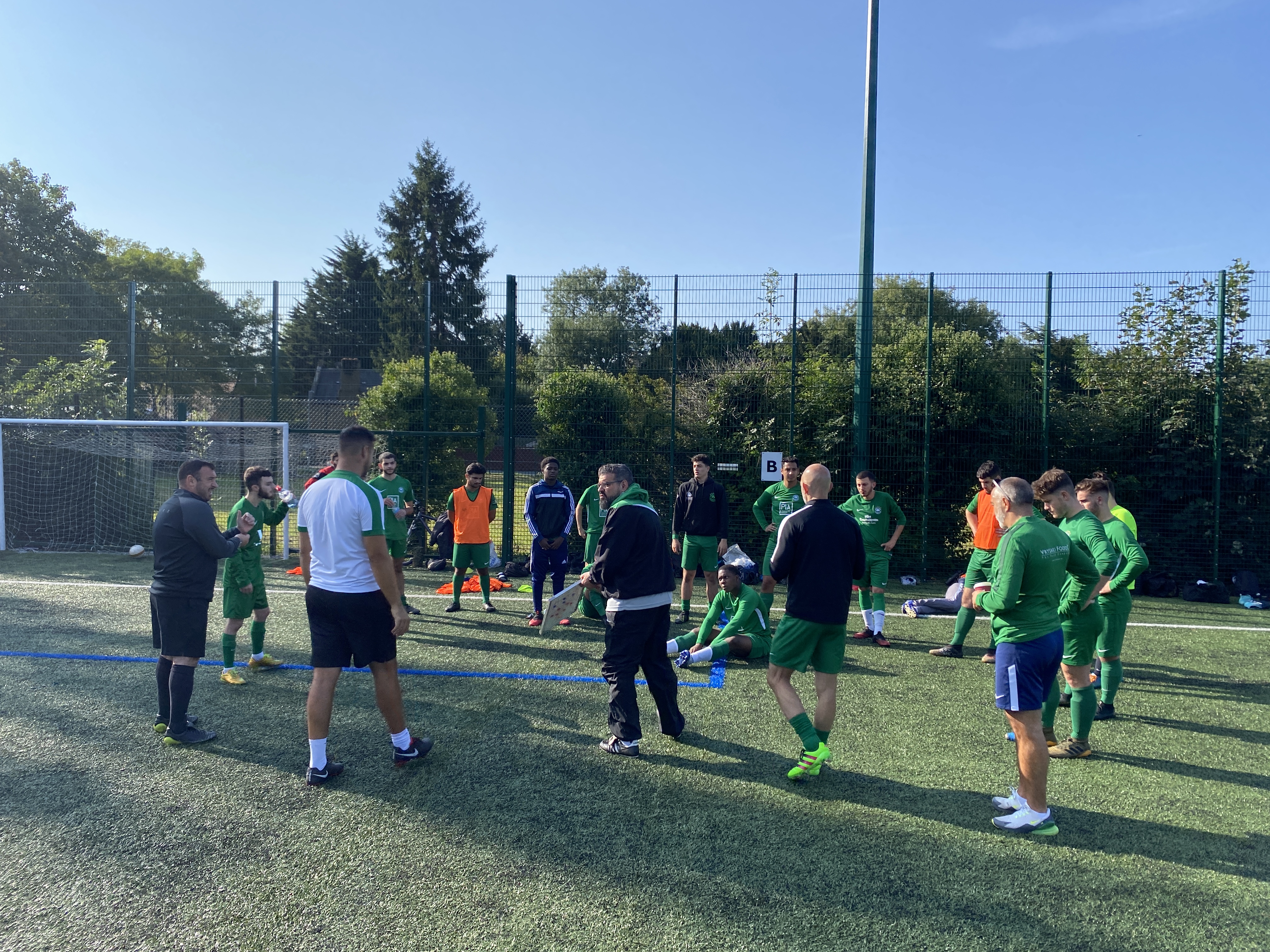 Alex Christofi and Serkan Nihat’s Under 14 White were delighted to be back playing football in a game that pitted a physical team against a technical side. In an exciting end to end game it looked like the Under 14 White would have to settle for a 4-4 draw. Dominating possession and chances in the last 20 minutes and turning the match into a game of defence versus attack, a last minute winner for the Under 14 White and last second goal line clearance earned the boys their first three points of the season.

Man of the Match Ioanis scored two goals with Michael, Harry and Yuliyan also on the scoresheet.

Myri Demetriou and Kyri Eleftheriou’s Under 12 White’s had to battle hard to win their game. With only 9 players available, al 9 boys had to play the entire match and they absolutely fantastic. Every single one of them gave their all and were totally shattered and hurting by the end of it. That said, they thoroughly enjoyed the experience. Coming out as 1-0 winners against a tough and physical team with back to the wall performance ill stand them I good stead for the rest of the season.. Man of the Match was Stefan with some fantastic last ditch tackles but the goalkeeper Alessandro was a very close second with some match winning saves. Both Kyri and Myri weer very proud of their team. Leo scored the winner and the message from the coaches is to rest up before another game on Tuesday!

Vas Demetri’s U12 Green also won their first match of the season, winning 3-1 away from home.

As with all the coaches and managers on the first match day of the season, the message was that it was good to be back and great to see the players enjoying their football again. This was a really good performance from the boys as they started off a little slow but once in the swing of things they had control of the game showing fantastic teamwork and encouraging each other. Goals from Luca V and Jake with Luka S named Man of the Match.

Mike Koumi and Adam Broomfeld’s Under 13 White were knocked out of the cup losing 4-0 to a team a division above them. It was a disappointing start for the boys, and missing key players it was never going to be easy for them. Conceding four goals inside 20 minutes meant they had a mountain to climb and after some changes were made, the boys responded well, creating chances in the second half but were unable to finish them off.

Zeno Vryonides and Vas Simou’s Under 13 Green played a team few divisions above them in the cup and it was a big ask but they were so excited and full of excitement that the result didn’t matter to them! The match gave the team the opportunity to experiment, all the players who attended played and even the referee praised the team’s energy and endeavour.

Mike Petrou’s Under 18 White lost to the odd goal in three in a tight match. There are lessons to be learned after this defeat but the boys worked hard and will be better for this experience.

Michael Pieri’s Under 16 White were handed a baptism of fire having been promoted for the third successive season. The boys never got going and were beaten convincingly 7-1. Mistakes are always learning opportunities and there is much to learn after this match.

Erdal was awarded the Man of the Match. He also scored the only goal with his first for the club. Scored his first goal for the club and the lad really put a shift in up top.

Robert Protei and George Constantinou’s Under 13 Gold were involved in a cup thriller as they played a team a division higher than them and won on penalties! In a hard end to end game, the boys battled and grew into the game as we went on. The Under 13 Gold initially went 1-0 down after controlling a lot of the game. They then equalised and with only eight minutes to go concede a silly goal off a corner but the boys did not give up, they kept their heads up and kept fighting and they managed to score with two minutes to go. In extra time the Under 13 Gold had two goal bound efforts cleared off the line and hit the crossbar twice. With match going to penalties all the Under 13 Gold players bar one scored with their Man of the Match Marco the goalkeeper saving two to send them into the next round.

In a historic moment for the club, the newly formed men’s team, who are sponsored by Crown Mobile Tyres, Athletic Development Club, The Master Locksmith, CJAZ Consulting and RAMEK asset management, played their first match in the KOPA League and with an average starting age of just under 19 years of age, they knew it would be a tough match. And so it proved as they eventually went down 7-1 to a team that included several excellent players. Adapting to the nuances of the men’s game will indeed be a challenge for the team but the enthusiasm they have shown in a short space of time to get to where they have is testament to the willingness to continue their football journey with the club of their youth.  The measure of success for the new men’s team was never going to the score this early on in the season. The team, having been formed from an idea a few weeks ago, to be ready to play in a league of this quality is an accomplishment itself. Huge credit to goes to al involved and not least to manager Chris Gregoriou. The scorer for the men’s team was Steven Wright whose expertly placed lobbed will forever go down in history as the first goal for the men’s team in the community KOPA League.