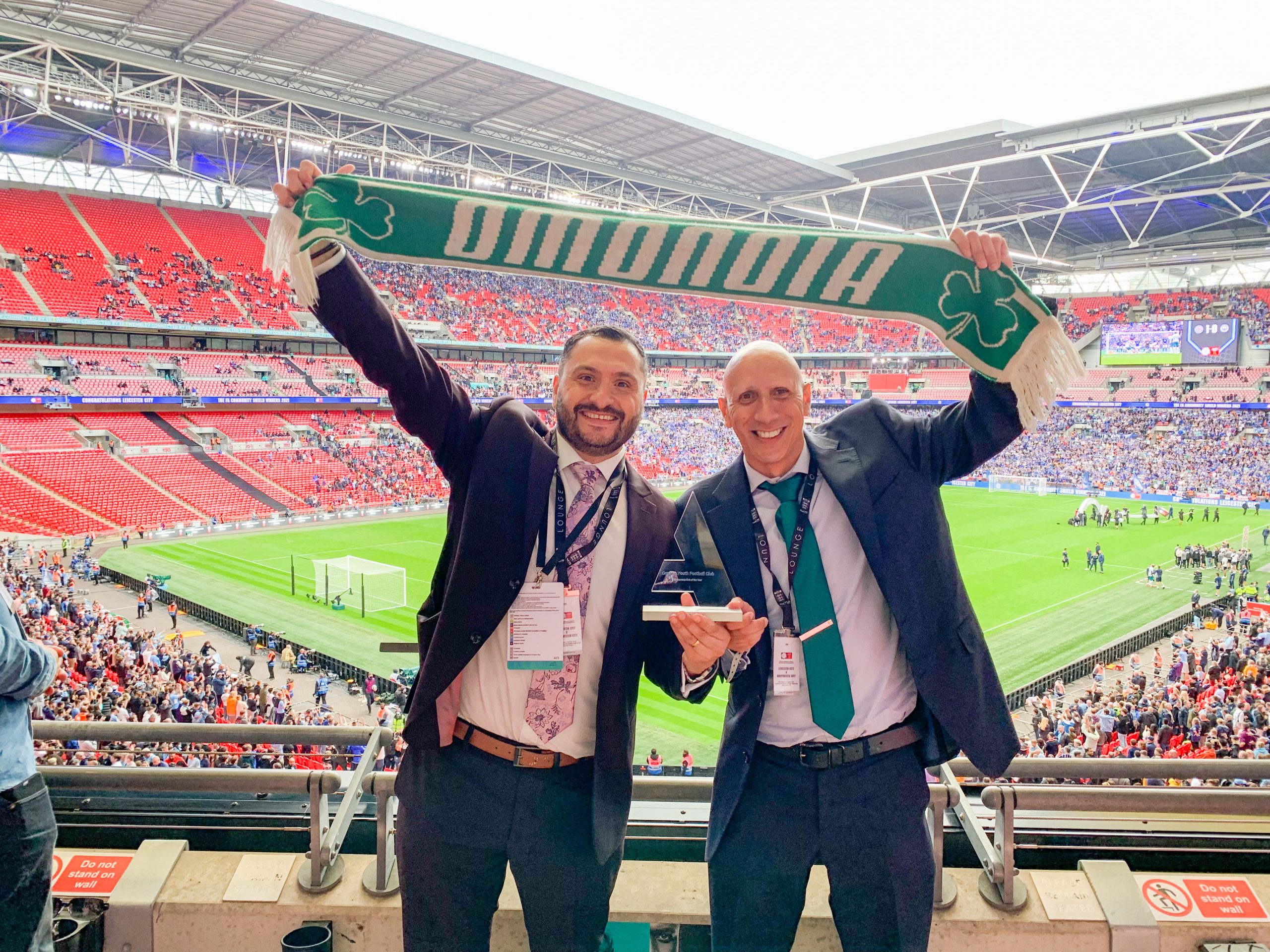 On Wednesday 1 September, community football club Omonia Youth FC, sponsored by Spector, Constant & Williams, Vas Barbers and V Jewellers, held their Annual General Meeting. The online meeting was well attended and all heard from 2020/21 Chairman Michael Pieri give a review of the season where he also announced he would not be standing again as Chairman.

In his speech, Mr Pieri underlined notable highlights from the past season, in particular the club proudly being named Middlesex County FA and the FA & McDonald’s Grassroots Club of the Year.

Mr Pieri thanked the Management Committee for their efforts during the season and commended the club’s community ethos, extolling the virtues that led to national recognition. He said:

“…to be named the 2021 Middlesex FA Grassroots Club of the Year and the FA Grassroots Club of the Year is such an incredible honour; it is an award that celebrates the good things about the club. It definitively and emphatically says to everyone that what we do has value; what we do is right; what we do has been looked at and appreciated. What greater vindication that what we do, that our way, what we espouse, what we hold dear, is acknowledged by our county and national football association? And so, these awards, this recognition, further enhances the belief that our values and our ethos, our philosophy is right.”

During his speech Mr. Pieri also introduced the last thing he put in place as Chairman, which is to establish the Omonia Youth FC ‘Club Life President’ award. This is an honour that will be bestowed on people who have gone above and beyond for the club, who have universal respect and who in the opinion of the committee sitting at that time, having been proposed by the sitting Chairman deserve recognition. It is more than just being a coach at the club it is about showing genuine love for the club in what they have done to try to make the club a better place for the children. With unanimous agreement, the first inductee as Life President of the Club is former club vice-chairman and welfare officer, Kyri Georgiou.

Treasurer Demi Shiamishis, who also decided to not stand again, was then asked to give a financial synopsis that showed the club in a very healthy financial position. Demi was thanked for his professional approach during his tenure and for processes and procedures he has put in place that have helped the club immeasurably.

The 2020/21 committee was then asked to stand down in order for the process of the new Management Committee to be elected.

Unopposed, and unanimously elected, the successor to Michael Pieri is Myri Demetriou. Evagoras Mandrides continues as Secretary with Kyri Eleftheriou the lead Treasurer in the new finance team.

“It is an honour and privilege to take the role of chairman at our fantastic football club, Omonia Youth FC. Firstly, let me thank Mike Pieri for the fantastic work he has done as Chairman over the past six years. He has guided this club to the next level and there is no better accolade than being both Middlesex FA and National Grassroots Club of the year 2021. Big shoes to fill. I am proud to say I helped you along the way, along with the rest of our fantastic committee. I will do my utmost to continue the work we have already been doing to ensure our club keeps going from strength to strength and keep on being the best we can to provide a safe and fun environment (pressure free) for our children to enjoy playing football and keep developing as players and young people.”

The club’s Chair of Trustees, Andy Charalambous gave a heart-warming speech, commending the club and paying tribute to the effort that is required to keep the club at the forefront of youth football in the community. Mr Charalambous also took the opportunity to inform the AGM that he would be stepping down from the post, ending a 14-year relationship with the club which has included being a committee member, coach and club sponsor. A new chair of trustees will be announced shortly.

During Mr. Pieri’s tenure, the club has seen an expansion in the number of teams at the club with 450+ children enjoying training and playing football on a weekly basis. In addition, girls’ football has thrived, the club introduced disability football sessions and now also have an established Men’s team. In the past six years, the club maintain their Charter Standard status and are now an England Accredited club. The club held two successful and financially lucrative Dinner and Dances and held their popular summer tournament five times, pausing only because of the pandemic. The club’s social media profile has accelerated via Twitter and Instagram along with a club website that is used as a hub for information and for prospective young footballers to easily contact the club. The past six years have also seen the club acknowledged beyond their local community by being nominated for and winning several awards: In 2017 the club were nominated for a Middlesex FA Community Award. In 2019 the club won Middlesex FA’s ‘Respect – We Only Do Positive’ Award. In 2020 Mr Pieri’s own son Alexandros, a former player at the club, won the Amateur Football Alliance ‘Rising Star of the Year’ Award. In 2020 the club were nominated for Middlesex FA’s ‘Grassroots Project of the Year’ for their disability training sessions. In 2021 Myri Demetriou was nominated for an individual award by the Middlesex FA and of course this year the club were named the 2021 Middlesex FA ‘Grassroots Club of the Year’ and the 2021 national ‘Grassroots Club of the Year’. These incredible achievements have elevated the status of the club to national levels.

For the record, the Omonia Youth Football Club’s Management Committee for the 2021/22 season is as follows: