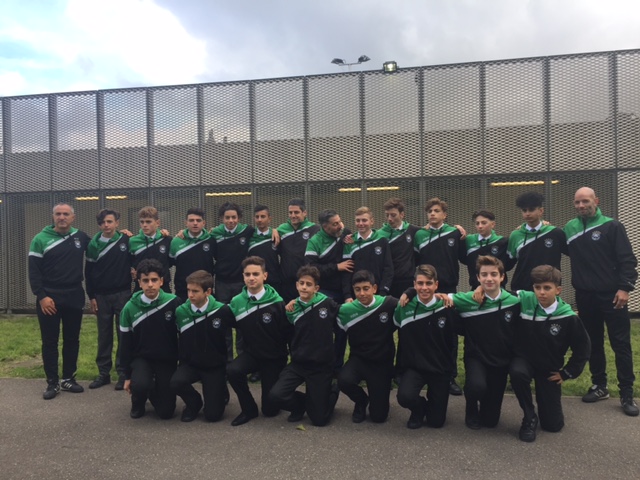 Of the five Under 13 teams, only one managed a victory, two were defeated and two drew.

Chris and Jimmy Mousicos Under 13 Gold won 3-1 thanks to goals from Kayden Trey Virgo (2) and Louis Georgiou. Man of the Match was awarded to both Freddie Morrall and Mohammed Conteh.

By contrast Michael Pieri’s Under 13 White were beaten 6-3 in a game were they actually took the lead. Defensive lapses did not help. Godwin Obeng got all three goals and was also awarded Man of the Match.

Nick Lingis’s Under 13 Green also tasted defeat but in very different circumstacnes. They lost 2-0 in extra time and went out of the League Cup but Nick was extremely proud of his team. He said: “The boys played absolutely brilliantly and showed great attitude and had great chances to win it. We only had 10 boys due to illness and injuries and played 15 minutes with 9 players due to another injury. No surprise that they are all Man of the Match today!”
Harry Theodorou and George Sammoutis Under 13 Silver drew their league game 2-2 while the Under 13 Girls again out on a fantastic performance as they improve game by game.

George Pantelides and Alex Tsaroulla saw their Omonia Girls draw 0-0 against a team who are top of the league. Both teams had good chances, including great left foot shots from from Aza in the first half and Magdalena in the second. The Girls defended really well, and considering their opposition beat them 4-0 on the first game of the season. Both George and Alex are happy with their team’s progress. Player of the Match was Nicole Petrou with an imperious defensive display.

The four Under 12 teams also had contrasting results as two teams won and two teams lost.

Savva Zavros’ Under 12 Gold lost 7-3 in what was described as a “…less than convincing performance by the boys.” Goals were scored by Ky Zavros, Theo Charalambous and Leo Capsalis. Ky Zavros was named Man of the Match.

Adam Demetri’s U12 Silver also tasted defeat, losing 2-1 in a physical game today where for large parts of the match the Silver’s were the dominant team but only had a 1-0 lead at half time to show for their efforts and unfortunately conceded two second half goals to lose the match.Goal was scored by Mixalis with Alexander M named Man of the Match
Mario Stavrou’s Under 12 White had to play without their regular goalkeeper but won their league encounter 3-1. The boys played really showing good vision, staying in position, exhibiting great passing of the ball to keep possession and creating opportunities.

Goals were scored by Louis, Valandi and Agim. Man of the Match was Mikey for stepping up as the replacement goalkeeper and playing superbly. Well done all.
Another U12 team won with Omi Omirou’s Under 12 Green winning 5-3. Jamal M (2), Alex K, Stef P and Man of the Match Louis L were the goal scorers.
Demi Shiamishi’s Under 14 Green were unfortunate to only come away with a 4-4 draw having led for large parts of the game.

A Man of the Match performance from Julian Zelli scoring a hat-trick and a goal from Koby Dutton was not enough to win an entertaining match which saw the referee play an additional ten minutes of added time which allowed the opposing team to come back from 4-1 down to draw and avoid their first defeat of the season. Even so Demi was rightly proud of his team as he said “…the team played very well coming in 2-1 up at half time and extended their lead in the 2nd half. It was a very pleasing performance with an excellent hat trick from Julian. There are lessons to be learnt and on to the next game.”

Nick Zimaras’ Under 18 White came from a goal down to win 2-1 at home. The Whites played some fantastic football, in a very tight game, with Rosley getting both goals. Man of the Match was Alexander Zimaras.
In the Mid Herts Premier League the Under 15 Green drew 3-3 in a scrappy game.
They were 3-2 up at half time but were pegged back early in the second half and could not find the all-important winner.
Goals were scored by Tobenna Abana (2) and Nezehna Eraibhor. Man of the Match was Tobenna Abana
Chris Gregoriou and Andy Kyriacou’s Under 16 White were beaten by their top of the table oppoents 3-0 but it was a much improved performance. Eya Choudhury was Mna of the Match on his debut.
The other Under 16 team also suffered defeat as Kyri Georgiou’s side were soundly beaten 6-1. Goal from Demitri with Luke named Man of the Match.
Nick Georgiou and Kenny Gregori’s Under 15 White lost 3-1 at home having gone in at haklf time 2-0 down. The boys fought back in the 2nd half to get a goal back and were unlucky not to score another two after hitting the post and crossbar. A lack of concentration cost them a 3rd goal in the last minute of the game. Goal was scored by Peter Michael with Ayrton Sarbeng named Man of the Match.

Omonia U15 in the London Youth Premier League won convincingly 5-1 in a game they dominated from start to finish, although the opposition did have some good moments themselves. The boys defended with good shape, were tenacious in midfield and decisive in attack! The whole squad played well with every player making a positive impact on the game.
Goals scorers Youssef Habibi (2), Anthony Papadopoulos (2 and Man of the Match) and Luis Duim.