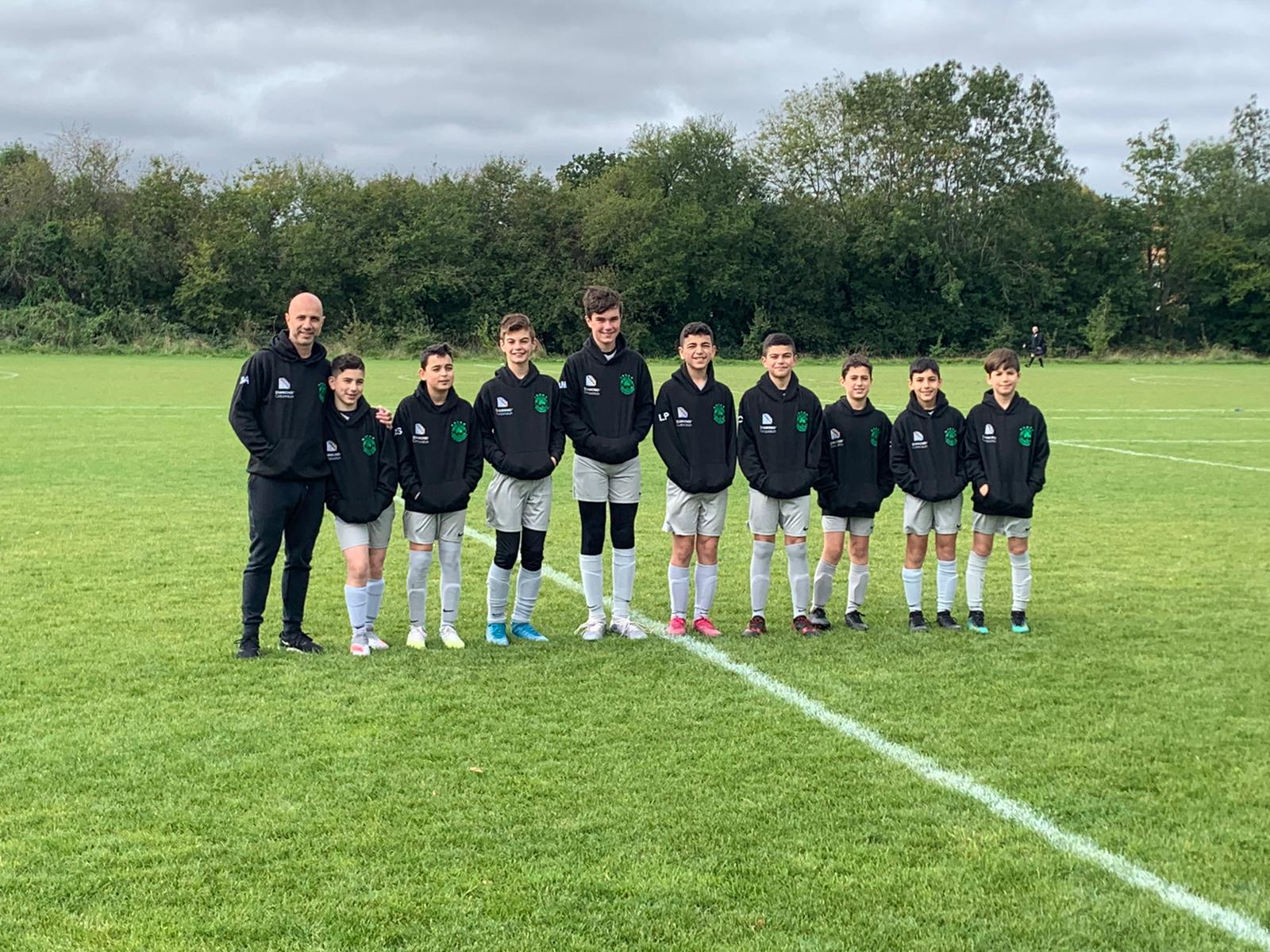 In the League Cup Myri Demetriou and Kyri Eleftheriou’s Under 12 White lost 4-3 in extra time to a team in a higher division and while the result may have disappointed, the way the team stuck to their footballing principles was far more important for the long term development of the players.

The Under 12 White went 2-0 down very earl on but brought it back to 2-2 to take the game into extra-time. They again conceded only for another equaliser with a brilliantly taken penalty in the top corner by Andrew who had won it in the first place. The Under 12 White tired by the end of the match as injuries limited the number of substitutions they could make and the nine players on the field had to battle through.  Unfortunately, with just a few minutes to go, another long ball caused mayhem in the box and the loose ball fell to an opposition player who scored to win the game for them. Disregarding the score, both coaches were very proud of their boys who showed resilience and effort against a big physical team and as part of the learning process, they will learn from this.

Goals were scored by Leo, Andrew and an own goal. Andreas was named Man of the Match for a good performance after missing last two games with illness showing composure on the ball when needed.

Tas Georgiou’s Under U14 Green lost 7-2 having gifted the opposition a number of goals and penalties. Goals were scored by Harry Gregoriou who smashed home a 30 yard free-kick and a nice team goal from Henry Clarke. Man of the Match was awarded to Dawson Yianni. This was the teams first defeat of the season and with injured players returning to the squad, a return to winning ways is expected.

Zeno Vryonides and Vas Simou’s Under 13 Green suffered defeat. The team never really got going and with only one substitution, changes were limited. Man of the Match was awarded to the starting substitute, a goalkeeper who came on and played outfield and was great. Well done!

Robert Protei and George Constantinou’s Under 13 Gold continued their good form with a 5-3 win but they had to come back from a goal down to secure all three points. They then went We then went 3-1 up before being pegged back to 3-2 before taking an unassailable 5-2 lead. It was a very good team performance from the boys who kept being positive and kept working hard. Goals were scored by Pablo Kalamaras (2) Man of the Match George Smith (2) and Antony Michael.

Nick Georgiou’s Under 18 Gold lost 3-0 with injuries and unavailable players still making it difficult to field a complete team. Players of the Match was awarded to both John Young and Anthony Gregori.

Mario Yiasemi’s Under 14 Gold also had personnel issues and had to start the game with only 10 players due to illness. Even so, the first half was very even until they went 1-0 down. The boys battled hard to get the score to 2-2 at the end of the first half but with a couple of injuries in the second half the impetus swung to the opposition who used the extra space on the pitch to run out 6-2 winners. It was nevertheless a brave performance by the boys who stayed on the pitch and kept battling until the end. Man of the Match Arda got both goals.

Mike Petrou’s Under 18 White were eventually won 4-1 even though the game was scoreless for an hour. Having gone 1-0 down the Under 18 White then took charge of the game, responded instantly before scoring four unanswered goals thanks to a Louis Petrou hat trick and an Alex Theoharous penalty.

The club’s new men team played their second ever match in the KOPA League and were outstanding give the calibre of opposition they were up against. Sponsored by Crown Mobile Tyres, Athletic Development Club, The Master Locksmith, CJAZ Consulting and RAMEK asset management the Men’s Team came up against title contender Anorthosis and held their own for 80 minutes with the score 0-0. Injures late in the game resulted in some changes needing to be made which altered the spine of the team and this enabled Anorthosis to capitalise late in the game and they eventually ran out 4-0 winners. A disappointing end to the game but extremely encouraging with te opposition manager commenting how surprised he was by Omonia Youth Men’s Team. There were some standout performances from senior members of the team, notably George Pantelides, the U16 Girls Manager and former Chairman Elia Constanti. The Vazania brothers were praised too. The coaching staff and the supporters look forward to the next with belief that the team and squad is gelling and  getting better and better with each training session and each game.

Manager Chris Gregoriou was effusive in his appraisal of the game: “It was a fantastic performance from the boys today. They stuck to a game plan and proved that a with a little more work on the training pitch we will be force. There are plenty of positives to take. Well done to them all. Man of the Match was awarded to Chris Varnava.

Elsewhere among the non-competitive teams, Cay Kemal’s Under 10 Green enjoyed a challenging and physical game where the players were encouraged to use their strength to protect the ball when in possession and to win it back when not in possession. Some take away point included understanding the difference between fouling and being strong.

George Stavrou’s Under 9 Green played George Sammoutis and Harry Theodorou’s Under 9 Silver in the first Omonia Youth derby of the season in what was described as an excellent game which was played with enthusiasm by both teams with every player having lots of fun and learning more about the game.