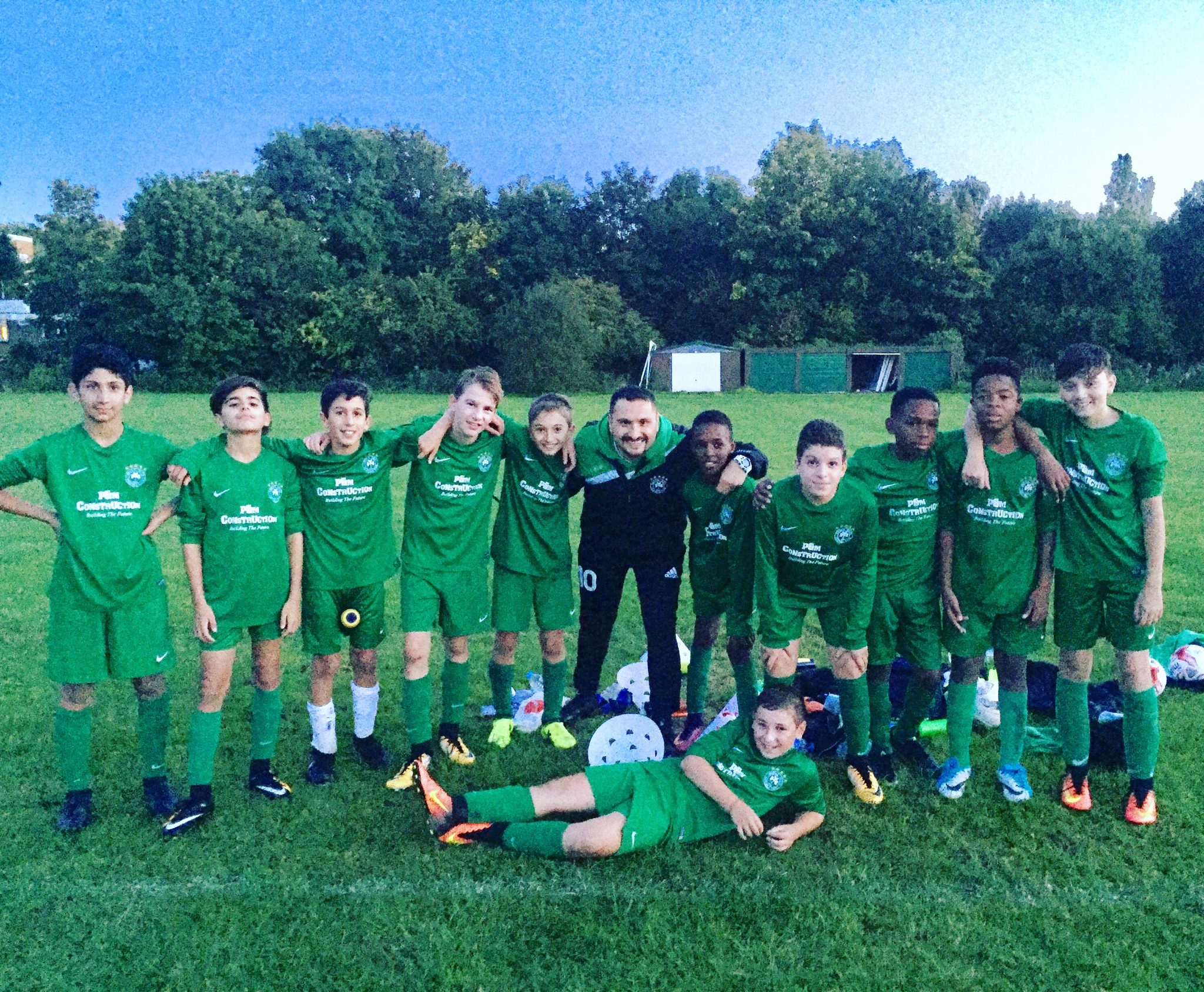 Community football club Omonia Youth FC, sponsored by P&M Construction UK Ltd, posted a set of mixed results for the teams who were in Challenge Cup action. Elsewhere, the younger, non-competitive team-s have had a positive start with the season.

Harry Theodorou and George Sammoutis’ Under 13 Silver continued their good start to the season with a 4-1 win in the Challenge Cup. In a very good team performance, characterised by the team working and linking well together Joe Tullis (2), Nicholas Theodorou and Ben Pool scored the goals to send them into the next round. Ben Pool was named Man of the Match.

The Under 12 Silver team, managed by Adam Demetri also had a positive result, thrashing their opponents 9-4. Goal scorers were Brodie (4), Nicola (3), Alexander M and Taylan with Nicola named Player of the Match.

Savas Zavros’ Under 12 Gold joined the U12 Silver in the next round thanks to a 2-1 away win. In a physical game for the boys they worked hard for the whole game and received their just reward. Kyriacos Zavros and Zachariya Choudhury with the goals. James Carter was named Man of the Match

Michael Pieri’s Under 13 went out of the Cup, losing 4-2 away having had to play most of the match with only 10 players and part of the game with only 9. Even though they eventually lost the match, the boys showed tremendous attitude and application. Even playing with fewer players, the team played superb and stayed true to their values. Fatigue and losing their GK for part of the match hurt the team but nonetheless, manager Michael Pieri was very proud of his team.

An own goal and Michael Nicola were the scorers with Emmanuel Onohua-Nzeh named Man of the Match for an outstanding centre half display.

Kyri Haili and Michael Petrou’s Under 14 White came from behind to win their Challenge Cup tie 2-1 after extra time. Goal scorers were Fred McGill and Alex Theoharous. Loui Cooperkeeble-Haili was named Man of the Match

Demi Shiamishi’s Under 14 Green twice went ahead against a team two divisions above before succumbing in the second half.  It was a very good performance and one the boys canbe proud of.

Finally Tony Kromidias and Mario Stavrou’s Under 12 White went out of the Challenge after being defeated 5-1. Louis got the goal with Agim named Man of the Match.

Chris Gregoriou’s Under 16 White were in League Cup action and lost a game they should really have won. After going ahead one-nil early in the first half, the team couldn’t convert the hatful of chances they created and went on to then concede two unfortunate goals following defensive mistakes late in the second half.

Goal scorer was Stavros Konstantinidis with Luke Philippou named Man of the Match.

In the Mid Herts Premier Division a great game with some fantastic goals ended with Under 15 Green drawing 3-3. The coaching and management team of Neo, Varney, Dean and Mario commented on a match that was played with high intensity.

The U15 Greens went one-nil down but equalised with the last kick of the first half through Barsa Mirtahmasebi. Having started the second half in lethargic fashion, the U15 Green went 2-1 down. A great equaliser from Mikey Dionisiou made it 2-2 . Clinton Beokojie put the U15 Green 3-2 up with an excellent header but with five minutes they conceded a goal that made it 3-3. George Stasi struck the underside of the bar with two minutes remaining.

Man of the Match was Mikey Dionisiou

In League action, Nick Georgiou and Kenny Gregori’s Under 15 White lost 4-3 away. After leading 2-1 at half time, defensive errors and a loss of concentration saw the oppisotion go 4-2 ahead. The lead was reduced thanks to a spectacular second goal from Peter Michael but it was enough.

Goal scorers were Peter Michael (2) and Andreas Georgiou with Peter also named Man of the Match.

Chris and Jimmy Mousicos’ Under 13 Gold could not sustain their perfect start to the season as they lost 5-3 Kayden Trey Virgo, Charlie Mousicos and Louis Georgiou were the scorers with Rhodos Stylianou named Man of the Match.

In the same division, Nick Lingis and Mario Christoforou’s Under 13 Green went down 3-2. Raul Amin was named Man of the Match having scored both goals.

Nick Zimaras’ Under 18 Whites went down 5-2 away in their first league game of the season. However the score line doesn’t tell the whole story. Whites were leading 2-1 half way into second half, having missed many good chances to finish the game. A dubious decision by the assistant referee disallowing a goal saw the team lose their discipline and shape which consequently led to them losing a game which they should have comfortably won. Scorers were Toki and Amelio. Man of the Match was George Charalambous for a fine debut.

In midweek action, three Under 13 teams were in action.

Michael Pieri’s Under 13 White got their league campaign off to the perfect start with 5-3 win. Having to play without their goalkeeper due to illness a reshuffled team went 2-0 down in the first half. However, a strong comeback saw the team score some cracking goals including a direct free kick and a half way line volley into the top corner. Goals were scored by Mohammed, Michael Nicola, Sammi Hristov, Alfonso Rosselli and Emmanuel Onouha-Nzeh. Man of the Match was Sammi Hristov

In the first Omonia Youth FC derby of the season, Chris and Jimmy Mousicos Under 13 Gold beat Nick Lingis and Mario Christoforou’s Under 13 Green 5-1. Kaden Njogu, Harry Phantis Cem Poyraz and Kayden-Trey Virgo (2) got the goals for the Golds with Raul Amin scoring a consolation for the Green. Man of the Match was Kaden Njogu.

U10 White – Mike Koumi’s U10 White have had a great start to the season. Seen here at Barnet FC.