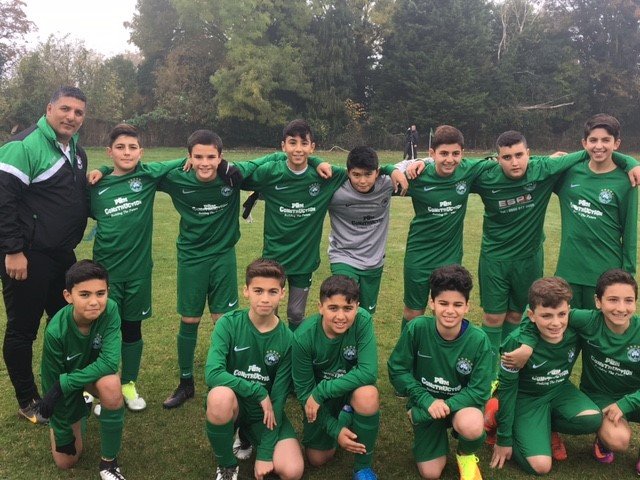 There was an unusually large number of draws on Sunday as youth football continued despite the cold weather for many of the teams of community football club Omonia Youth FC who are sponsored by P&M Construction Ltd.

Andy Charalambous’ Under 14 White bucked the draw trend and won 3-1 to stay in contention at the top of the table. Scorers were Louis Qamite (2) and Erik 1. Man of the Match was Alex Morgan.

The Under 14 Green lost their quarter final League Cup tie in a fantastic match, going down to a last minute goal to lose 4-3. It was described as a superb game of football with the Greens battling back from 3-1 down only to see their hopes dashed in the last few moments of the match.  Goal scorers were Clinton Beokojie, Toby Abanna and Michael Dionisiou. Michael was also named Man of the Match.
Three Under 12 teams played on Sunday and all were undefeated with two draws and a win.

In the Spring Plate, Harry Theodorou and George Sammoutis’ Under 12 Silver came away with a 2-2 draw. Joshan and Kyri got the goals with Anthony named Man of the Match.

In the league, Jimmy and Chris Mousicos saw their Under 12 Gold also draw 2-2. Goalkeeper Lewie saved his second penalty of the season while the Gold’s could have won the game with the last kick of the match but a great shot hit the bar. Scorers were Kayden and Louis G. Men of the Match were Cem and Jay.

Michael Pieri’s Under 12 White recorded their third straight league win with a hard fought 3-1 victory. Scorers were Santino Raia, Panos Chambi and Nicholas Lecointe-Akore. Nicholas was also named Man of the Match. The win leaves the White’s nicely placed in second place, one point off the league leaders with three games in hand.

Kyri Haili and Mike Petrou’s Under 13 White drew 3-3. All the goals were scored by Man of the Match Louis Petrou.

Elia Constant’s Under 16 Green rued their many missed chances. Having played really well and created in excess of 15 excellent goalscoring opportunities, the team unfortunately tasted defeat, losing 3-1. Goal scorer was Amelio Georgiou. Men of the Match were Luke Hadjithemistou, Andrew Artimidis and Marios Charalambous
Demi Shiamishi’s Under 13 Green played superbly and earned a well-deserved 1-1 draw against the league leaders. Goalscorer was Julian Zelli. Man of the Match was Savva Pantelli.

That completes the weekend’s round-up. Should you feel enthused and want to know more about Omonia Youth FC, you can contact the club at omoniayouthfootballclub@hotmail.com, via the contact page on www.omoniayouthfc.com and follow the club on twitter @OmoniaYouthFC.