Last Sunday Michael Pieri’s Under 14 White knew one more win from their remaining two matches would seal promotion. Playing away, the Under 14 White got into their stride early on and after two near misses deservedly took the lead through top scorer Noel Allen. More chances came and went but a defensive mix up at a corner led to the equaliser. The opposition also had plenty to play for and needed a win to keep their promotion hopes alive. They started the second half stronger and took the lead. The Under 14 White equalised almost immediately, a goal scored again by Noel. With 10 minutes to go Alfonso Rosselli scored to make it 3-2 but an error at the back again gifted the home side a goal. 3-3 with minutes to go, it was fitting that one of the team’s original members scored after a goalmouth scramble, Santino Raia getting the goal with just two minutes to go. Scenes of jubilation and relief met the final whistle as the win confirmed promotion. It has been a season of success for the Under 14 White as in addition to promotion they also made it to two cup quarter-finals and a semi-final too. Noel Allen was named Man of the Match but every player made a positive contribution in what was pulsating, nervous but ultimately rewarding match. Coach Michael was rightly proud of his team as he said: “Getting out this division was the season’s priority and the boys have been fantastic in their commitment and endeavour to make it happen. They deserve their joy.”

Barrington and Demi Shiamishi’s Under 15 Green continued their fine recent form and won a thrilling league game 3-2. Goals were scored by Julian, Alexi G and Koby. Savva was named Man of the Match. It has been a turnaround season for the Under 15 Green as where they were once relegation fodder they have now moved up to third place. A fantastic improvement.

Panos Papa-Michael, Elias Constanti and Andy Michael’s Under 15 Gold ended the league campaign on a high with a 6-3 win. The game was open and played in good spirit and the large crowd very much enjoyed the game and witnessed some wonderful goals. Man of the Match Andreas Polycarpou got four goals with Fabion Zylfi and Zack also on the score sheet. The team now have two weeks to prepare for the Challenge Cup Final. Come on You Greens!

Mario Demetriou, Johnny Othona and Elvis Leon’s Under 12 Green battled well to a 2-2 draw. The boys had opportunities to win the game but they couldn’t quite convert the chances that were created. Nevertheless with four league games left, there is plenty to play for. Goals were scored by Nat and Alex with Zach named Man of the Match.

At the Radiomarathon Centre in Enfield, the Under 18 Greens ended their season with a 3-1 defeat however overall the season has been a very positive one by finishing in a high league position, enjoying long cup runs and of course the very special trip to Cyprus earlier in the year.

The only goal was scored by Andreas Georgiou and the Man of the Match award was very fittingly awarded for the performances of two long-standing young footballers who have served the club superbly. On Sunday, both Charlie Constanti and Antoni Kyprianou played their last games for the club.

Antoni is the son of ex-Chairman Kypros Kyprianou and the younger brother to Andreas and Harry, who both previously played for Omonia for many years. The family have and continue to be involved in the Club and we thank them all for their positive impact over the years.

Charlie is the son of ex-Chairman Elia Constanti and on Sunday he completed 11 consecutive seasons for Omonia Yoouth with the same heart and desire as he did from day one as a 7 year old; a fantastic achievement and a great ambassador over the years for the Club.

At the other end of age scale, Kyri Eleftheriou and Myri Demetriou’s Under 10 White showed at the end of their game that community spirit extends beyond club affiliation. Both the Under 10 White and their opponents London Colney Youth Jaguars showed a united front to promote Kicking Racism Out of football (see photo). As for the match, both teams showed determination and both produced great performances as the game was played in a positive, competitive and fair spirit. Both Myri and Kyri commented that it is always a pleasure to take the pitch against this team and their coaches. Both coaches were also rightly very proud of their team and their strong performance in what was their final game of the season and final game in 7-a-side format. 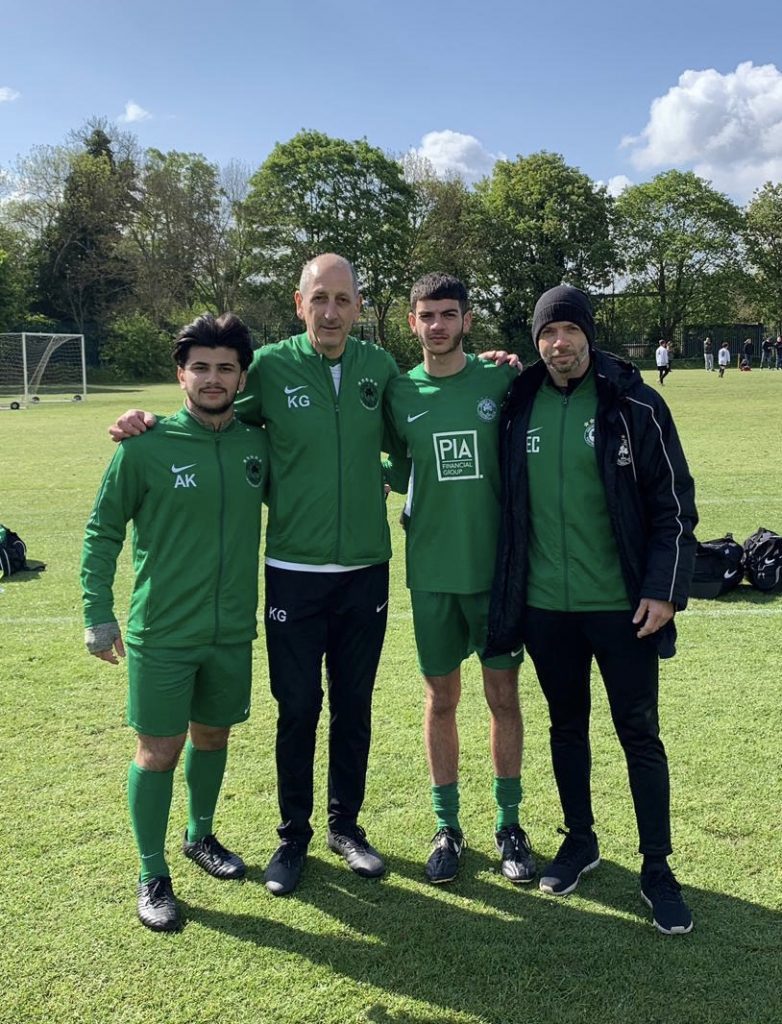