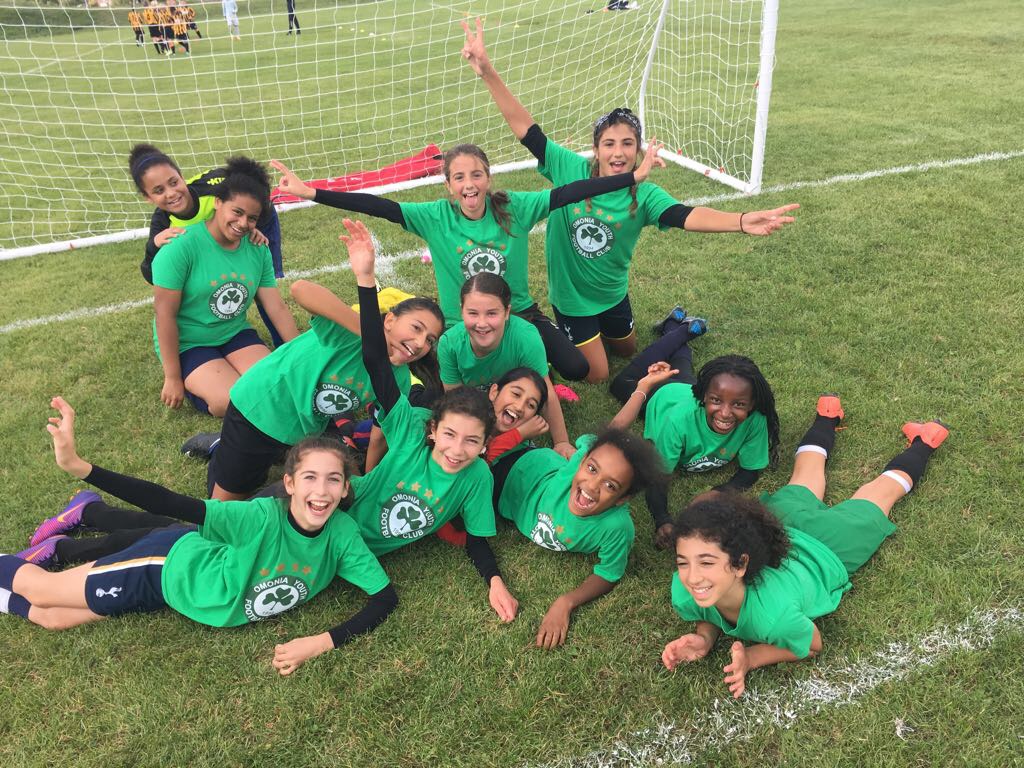 Community football club Omonia Youth FC, sponsored by P&M Construction UK Ltd, had plenty to cheer about on Sunday, not least as the club’s girls’ team recorded their first victory.

Having only started training as a group less than a year ago and having only joined a competitive league this season, it was with great pride manager that George Pantelides reported that the Omonia Youth FC U13 Girls secured their first ever victory in the Essex County Girls League game.

Despite going 1-0 down in the first half, the Omonia Girls fought back to equalise through Chelsea Laryea. After an inspired tactical shift to play 4-3-1 (with wingbacks) from young coach Alex, the Omonia Girls powered on with second half goals from Aza Douglas-Williams and a ten minute hat trick from Player of the Match Emilia Pantelides, including a goal scored after an incredible mazy run, which started in her own penalty area!

George wanted to also give thanks to the team’s fantastic away support and a mention to stand in goalkeeper Andrianna, who deputised for Izzy really well.

Beaming with pride George said: “It was an-round fabulous performance from all the girls for our first win and we are rightly very excited for the future!”

Mike Petrou and Kyri Haili’s Under 14 White won 7-2 after a fantastic performance from the whole team who worked hard to take a 3-1 before half time. The team continued to dominate the second half of the game with some great football being played which led to another four goals being scored.

A mixture of results for the four Under 13 teams. Chris and Jimmy Mousicos’ Gold lost a tight match 2-1. Kayden for the goal with Kayden with Gianluca Rosiello named Man of the Match.

Michael Pieri’s Under 13 White had to come from behind to secure a draw. Having gone 1-0 up, defensive lapses in concentration saw them go into the last seven minutes 4-2. However the team showed great character and resilience to score two late goals and leave with a point after a 4-4 draw.

Goals were scored by Alfonso Rosselli (2), Santino Raia and Sami Hristov. Emmanuel Onouha-Nzeh was named Man of the Match.

Harry Theodorou and George Sammoutis’ Under 13 Silver came away with all three points in their after stunning team performance scoring seven unanswered goals.

Nick Georgiou and Kenny Gregori’s Under 15 White lost 6-0 away. It was a disappointing final result after a great first half performance where the team created numerous chances to score but could not get the ball in the net. In the second half, heads went down after conceding two goals and it was all downhill from there. MoM Lyon Theoharous

Chris Gregoriou’s Under 16 White continued their unbeaten run in the league with a well fought 1-1 draw. After conceding a first half injury time goal, the team regrouped at half time and came out fighting in the second half dominating both possession and chances created, which finally paid off midway through the second half, with a great team goal intelligently finished off by Chris Yiannitsarou Although the boys continued to push for the winner right up to the final whistle it wasn’t meant to be with the game ending honours even. Man of the Match was Alex Androutsos.

Fellow Under 16 team, Kyri Georgiou’s Green also drew in a game which they dominated from start to finish. The Green’s found themselves 3-1 down with five minutes to go but had the character to come out with a draw. Goal scorers were Solos Souris (2) and Michael Speers 1. Solos was also named Man of the Match.

Savvas Zavros Under 12 Gold lost 4-0 away in what was a respectable performance by the boys. Man of the Match was the whole team.

Omi Omirou’s Under 12 Green won 3-0 thanks to goals from Man of the Match Mikey O, Louis L and Alex K.

Nick Zimaras’ Under 18 White were unfortunate to be down 2-0 at half time but they didn’t turn up in the second half and showed and ended up losing 6-0.

The last result to be logged on Sunday was a late kick off from South London where Panos Papa-Michael and Elia Constanti’s U15 who play their matches in the London Youth Premier League lost 5-3 after a hard fought match. Yousef Habibi got all three goals.

Should you feel enthused and want to know more about Omonia Youth FC, you can contact the club at omoniayouthfootballclub@hotmail.com, via the contact page on the club’s website www.omoniayouthfc.com as well as following the club ontwitter @OmoniaYouthFC and Instagram @omoniayouthfc1994.

Under 9 White – Best performance of the season; so proud of our U9Whites!
The team had fun and played the game how it should be played.