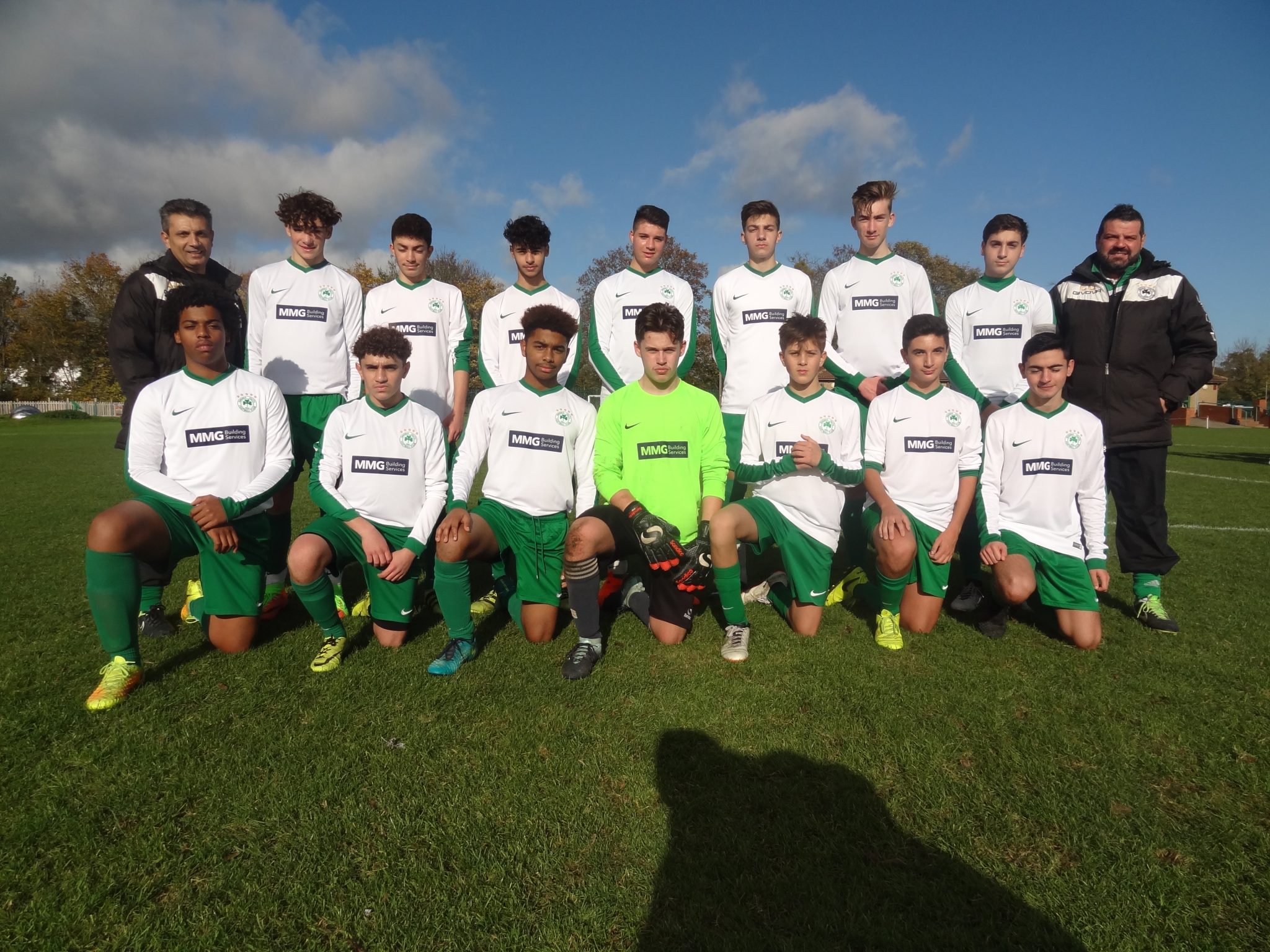 As we approach the Christmas break, there were mixed results for the teams of community football club Omonia Youth, sponsored by P&M Construction UK Ltd.

Both U16 teams were in action but with contrasting fortunes. Kyri Georgiou’s Under 16 Green played the same team they beat last week in the Cup. Unbeaten in the league, the Green’s opponents showed why they are on such a fine run of form and came away with a 2-1 win but were it not for some inspired goalkeeping from their opposition, the Greens would’ve taken at least a point from the game. Solos got the Greens goal and was also named Man of the Match.

Chris Gregoriou and Andy Kyriacou’s Under 16 White produced a really good team performance and kept their first clean sheet of the season. Some really good movement of the ball and intelligent play led to the goals for a 2-0 win, to keep them third in the league. Alex Androutsos scored both goals with Luke Philippou being named Man of the Match.
A stunning display of attacking football from the Under 13 Silver as George Sammoutis and Harry Theodorou’s boys went goal crazy, scoring twelve goals on their way to a 12-1 win. Goals from Joe Tullis (3), Oscar Hickley (3), Mehmet Buyuk (3), Ben Pool, Anthony Antoniou and Marco Chrysostomou. Anthony was named Man of the Match.

Michael Pieri’s Under 13 White had to come from behind for the second successive to take all three points and move to second in the table. Trailing 1-0 the boys showed great resilience and didn’t panic. They went into the break 1-1 thanks a lovely headed goal from Sanitno Raia. In the second half the Whites were dominant and controlled possession. The pressure eventually forced a breakthrough with captain Sami Hristov scoring a fine solo goal. Man of the Match was Stefanos Pieri for two fantastic saves ad keeping a clean sheet in the second half.

Nick Georgiou and Kenny Gregori’s Under 15 White were beaten at home 6-0. The score belies the many opportunities the team created but could not convert; even missing a penalty. Despite the goals conceded, Man of the Match was goalkeeper Alex Paphitis.

Mario Stavrou’s Under 12 White again played very well but unfortunately lost the match 2-0 What was pleasing for Mario and the team was at the end of the match, the chairman of the opposition came over and congratulated the Whites on a fine performance. Man of the Match was Alex Stylianou.

Nick Zimaras’ Under 18 White suffered last minute heartache for the second successive week as they lost 4-3 having gone in at half time 2-1 up. Goal scorers were Alexander, Joe Cannon and Hamza with Alexander named Man of the Match.
The Omonia Under 15 team who play in the London Youth Premier League Omonia RC Lens, a London satellite for the French professional team. In a great game of football where both teams contriubuted to a balanced match, a 3-3 draw was the fair result. Goal scorers where Steven Kadriu, Fabian Zylyfi and Luis Domi.
Finally the next generation of Omonia Girls played their first friendly match on Sunday. Girls from years 4, 5 and 6 did so very well and coaches George, Alex, Sophia and Timi were very proud of their efforts, as many of them were playing their first match for the club. There was plenty of great passes, tackles, interplay and some fantastic goals. George Pantelides summed it up by saying: “…the future is definitely bright (green & white)!”