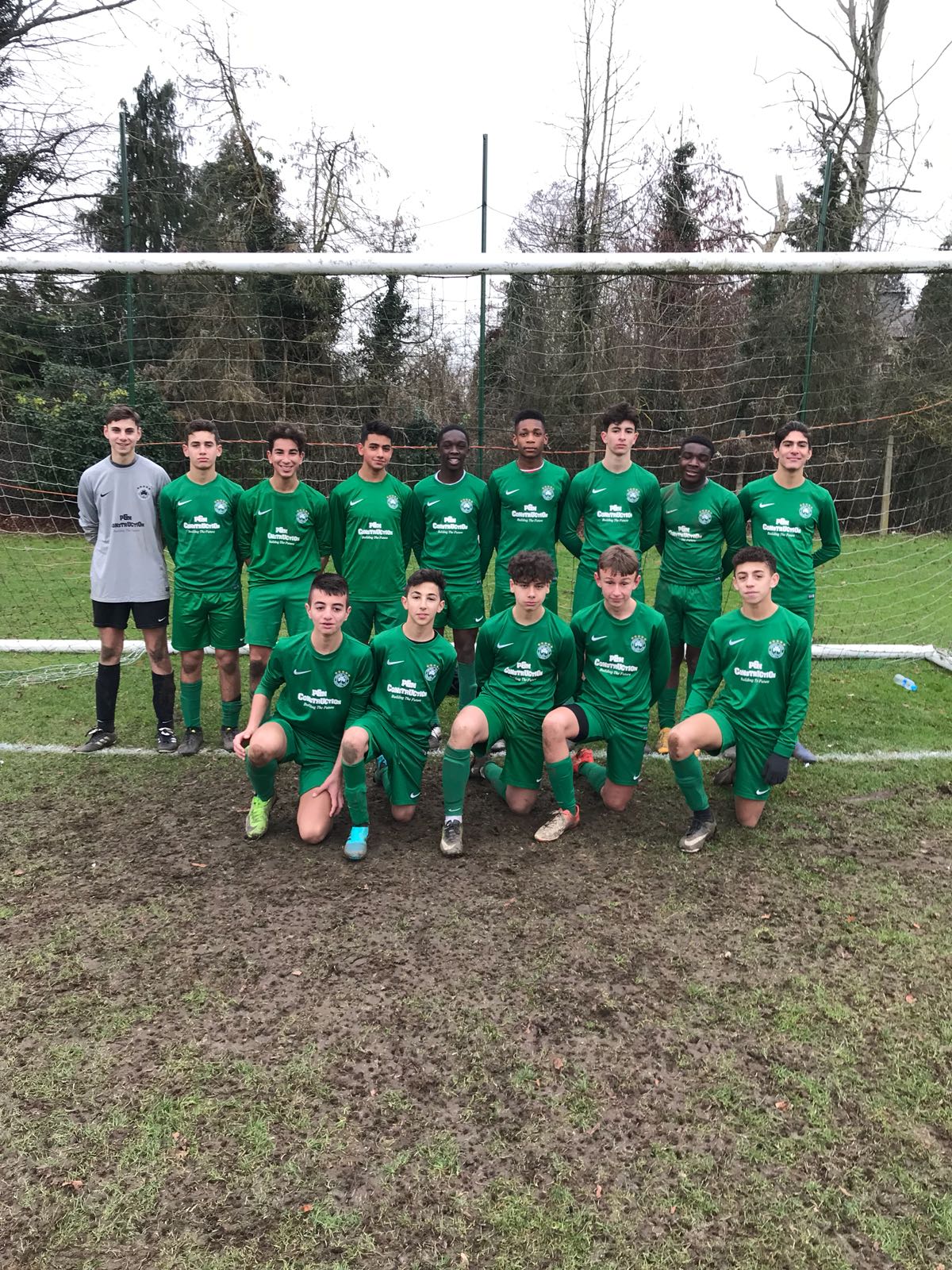 Community grassroots football club Omonia Youth FC, sponsored by P&M Construction UK Ltd, was heartened as two of their sides progressed in important cup competitions while another just failed to make it three out of three.

In the prestigious Middlesex County Cup, Omi Omirou’s Under 12 Green were dominant as they won their quarter final tie 4-0 to progress to the semi-finals. Goalscorers were Stef P, Mikey O, Louis L, and Jamal M with Leo I named Man of the Match. Progressing to the semi-final means the team are just one game away from contesting a County Cup final, the pinnacle in grassroots youth football. Indeed, the five stars on the club badge symbolise the five County Cup successes the club has enjoyed during their history. Time for a sixth?

In the Mid Herts Cup, Dean Dionisiou, Varney Michael, Neo Petrides and Mario Kleopa’s Under 15 Green team pulled off a stunning result by beating the cup holders to take their place in the quarter final. In what Coach Dean Dionisiou described as “…an outstanding performance…” the Under 15 Green won 5-2 in a game played at high intensity. The Under 15 Green took a deserved lead midway through the first half with a ferocious shot on the turn from Toby Abana and even though they had more opportunities to extend their lead, the teams went into the half time break with the tie finely balanced. The second half was again played at a ferocious pace but was different was the Under 15 Green took their chances when they came Toby added his second early in the second half before George Stasi added a third. Their opponents pulled a goal back and were now under pressure. Defending a corner, the Under 15 Green scored a brilliant breakaway goal to make it 4-1, Stasi again with the goal. Their opponents pulled another goal back but with minutes remaining George Stasi completed a brilliant hat trick to give the Under 15 Green a deserved and hard fought 5-2 victory. “It was a great footballing performance by the boys against a strong physical side” was how Dean evaluated the game. Man of the Match was Lawrence Young.

With two fantastic cup victories, it was a shame Panos Papa-Michael, Elia Constanti, Andy Charalambous and Andy Michael’s Under 15 couldn’t make it a hat trick of cup wins as they saw their side lose in their semi-final of the AFA Cup.

The boys started off very nervous and did not play their usual high tempo game and it was no surprise they went 2-0 down in the first half. The team were far better in the second half and got a goal back from Yousef Habibi. Having created plenty of chances to take the game into extra time, it was not to be. The team will have learned many valuable lessons that they will no doubt take into the rest of the season.

In league action Michael Pieri’s Under 13 White completely dominated their match but could only convert one of their many chances while their opponents scored two goals from their three strikes at goal. There were many positives to take from the match with Michael Nicola and Yianni Sophocleous both having excellent games in the full back positions and both sharing the Man of the Match award. Emmanuel Onouha-Nzeh got the only goal.

Nick Lingis and Mario Christoforou’s Under 13 Green drew their league match 2-2 and were also pleased with their team’s performance. Erin MagashI and Jamie Aker scored the goals with Jamie named Man of the Match.

Chris and Jimmy Mousicos’ Under 13 Gold came away with a comfortable 2-0 win with goals from Jay Tyler and Cem Poyraz. Rhodos Stylianou was named Man of the Match.

Harry Theodorou and George Sammoutis’ Under 13 Silver continued their excellent form with another win, a comprehensive 5-0 win. Viktor was named Man of the Match after scoring four goals with Oscar getting the other one.

Savvas Zavros Under 12 Gold lost 3-0 having to play their game with no substitutes. However the boys showed one hundred percent commitment with Savvas proud of his team’s efforts. Man of the Match was James Carter.

Mario Stavrou’s Under 12 White won their league game 2-0 thanks to two goals from Agim. Man of the Match was Mikey.

Nick Georgiou and Kenny Gregori’s U15 Whites lost their match 5-1 but the score was not reflective of a fine performance where the boys played some of their best football of the season. Their goal was scored by Theo Stavrou with Andreas Georgiou named Man of the Match.

The Under 13 Girls, coached by George Pantelides overrun in the second half of their President’s Cup game. They trailed 2-1 at half time but ended up losing 7-1 after having to end the game with only eight players due to injuries to four players including the goalkeeper. The highlight of the match was an accomplished run and finish into the top corner by Aza Douglas-Williams for the girl’s goal. Player of the match was Chelsea Laryea who battled hard in a new central midfield position. A special mention to the opposition coach who took off one of his players when the Omonia Girls went down to eight players, despite complaints from his own supporters!

Chris Gregoriou and Andy Kyriacou’s U16 White lost 3-1. Their only goal was an own goal with Antonio Gelagotellis named Man of the Match.

Under 11 Green enjoying their football this season