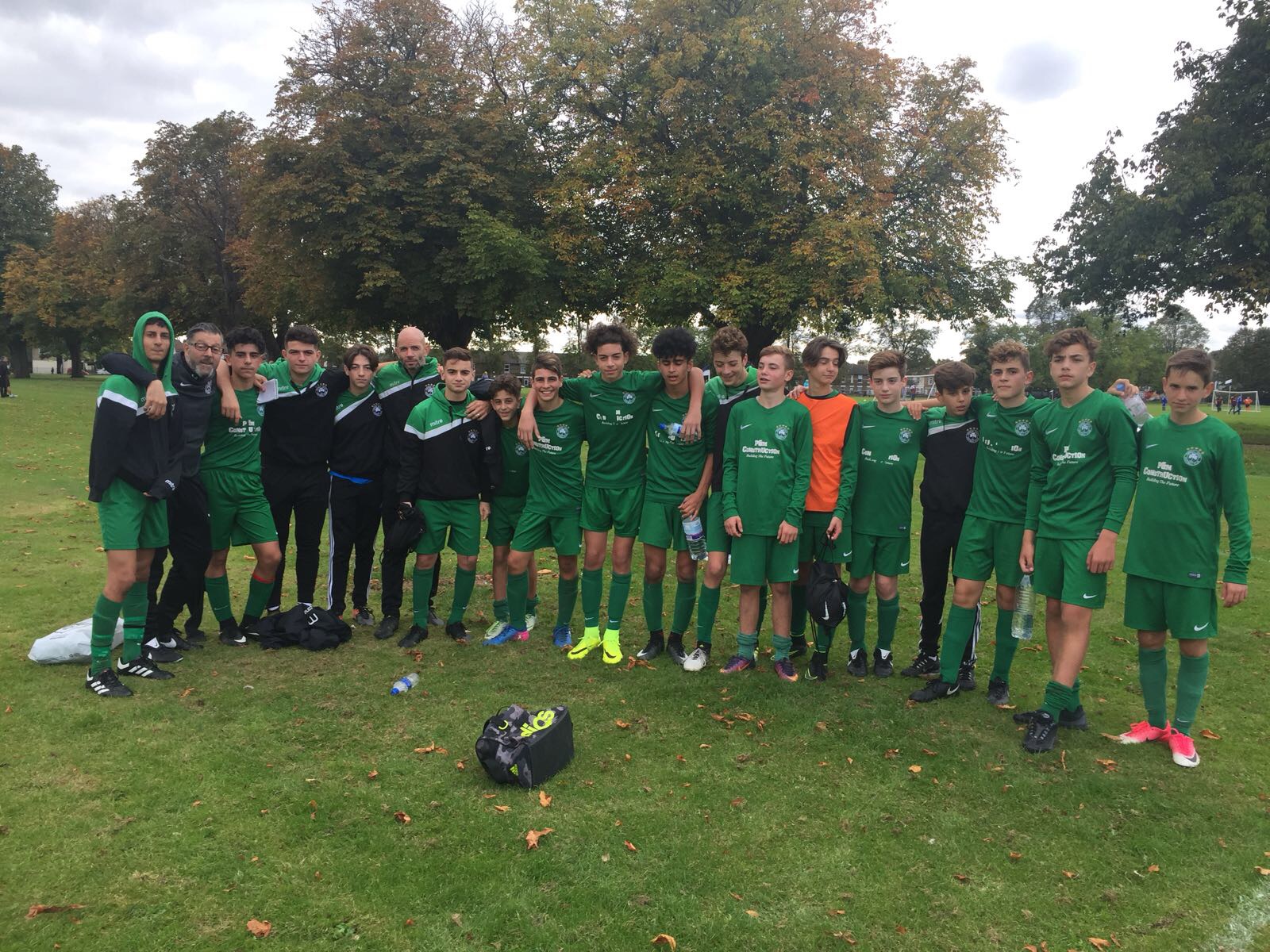 Community football club Omonia Youth FC, sponsored by P&M Construction UK Ltd, had many of their teams in County Cup action. The pinnacle in youth football, the five gold stars on the club badge is derived from the club’s five County Cup wins over the years.

Two Under 13 teams were in Middlesex Cup action and both progressed to the third round.

Chris and Jimmy Mousicos’ U13 Gold were dominant as they won 3-1 away in West London.

Louis Georgiou , Jay Tyler Constantinou and Cem Poyraz got the goals with Freddie Morrall named Man of the Match.

Nick Lingis and Mario Christoforou’s U13 Green also went through thanks to an emphatic 6-1 away win. Jack Anastasi helped himself to a hat-trick and was named Man of the Match. Raul Amin got two goals with George Androutsos getting the other one.

If scoring six goals is impressive, the Under 15 Green won 27 – 1. In a total mismatch of a game it was shooting practice for the boys. There were 11 different scorers and four hat-tricks with Tobenna Abanna top scoring with 10 goals. Other scorers were George Stasi (3), Angelo Michael (3), Nezehna Erhabor (3), Andrew Stavrinou (2), Zachary Chrysovalandis, Barsa Mirtahmasebi, Michael Dionisiou, Michael Kleopa, Luca Cardines and Clinton Beokojie.

Man of the Match was Nehizena Erhabor.

Nick Georgiou and Kenny Gregori’s Under 15 White endured a heavy defeat as they crashed out of the County Cup losing 8-0 away to a team in the top division. Goalkeeper Alex Paphitis was named Man of the Match thanks to a string of great saves which kept the score down.

Adam Demetri’s Under 12 Silver also went out of the County Cup losing 5-2. In what was described as a brave performance having to play with no substitutes and against a side three divisions higher than them, the Omonia boys should be proud of their effort.

Goal scorers were Peter Christofi and Alexander Tofalis. Man of the Match was Georgi.

In the AFA County Cup Panos Papa-Michael and Elia Constanti’s Under 15 won 2-1 against a side who known as a feeder centre for Southend United. They were also last year’s finalists so this was a big scalp for the team. Having been 1-0 down in the first half the team recovered thanks to a second half equaliser from Andy Polycarpou and with minutes to go, Youseff Habibi got the winner. Andrew Christofi was named Man of the Match for an all action midfield performance.

Another big score was posted in the County Cup as Omi Omirou’s Under 12 Green won 18-0. Scorers were J Muhammed (8) who was also named Man of the Match, Billy O Sullivan (2), S Papa-Michael (2), L Andreou (2), Z Omirou, E Andreou, M Georgiou and A Kuzmich.

Savvas Zavros Under 12 Gold were taken all the way to penalties in their County Cup encounter but unfortunately lost 4-2. In what was an end to end action packed game the Omonia boys showed incredible determination and gave an absolutely committed performance by the boys. Man of the Match was James Carter.

Tony Kromidias and Mario Stavrou’s Under 12 White also went out of the County Cup lsing 7-3 but the scoreline doesn’t tell the story of a team that coach Mario was proud to say played some of their best football. Unfortunately during the second half they run out of steam due to lack of subs but they all walked away happy with what they have learned which to Mariowas the best result in unbalanced cup games.

Goals were scored by Val, Alex and Agim with Sasha named Man of the Match.

Demi Shiamishis U14 Green were in league action and after going 2-0 up were pegged back to 2-2 to draw a game they should have won. This was a game were lessons will be learnt about concentrating for the whole game.

Julian Zelli and Alexis Georgiou were the scorers with Julain Zelli named Man of the Match.

Nick Zimaras’ Under 18 White lost 7-3 at home but it was a much closer match than scoreline suggests with the boys playing some good stuff but it’s not quite going for them this season. Goals by Rosley, Luke and Jordan. Man of Match was Hamza.

Mike Petrou and Kyri Haili’s Under 14 White lost 6-3 in what was definitely a game of two halves. The Omonia boys conceded six first half goals but then outplayed their oppoents in the second half but only managed to score three. From the numerous shots on target which either hit the woodwork or made their way into the keepers hands.

Louis Petrou, Adam Curran and Tyler Attridge were the scorers with Adam Curran being named Man of the Match.

Finally, on Sunday George and Alex were proud coaches as they saw their Under 13 Girls team play their first home match season. They lost 3-1 but overall it was an excellent performance from the girls, who dominated the first half, scoring early on. The girls led until the middle of the 2nd half, when the opposition scored two quick goals after their equaliser. It was thoroughly encouraging that the girls created many chances in that 1st 35 mins. Coach George and Alex would like to publicly thank the parents, family and the Omonia faithful who supported the girls who looked resplendent in their new kit. The goal was scored by Chelsea Laryea with the whole team being named as Players of the Match.