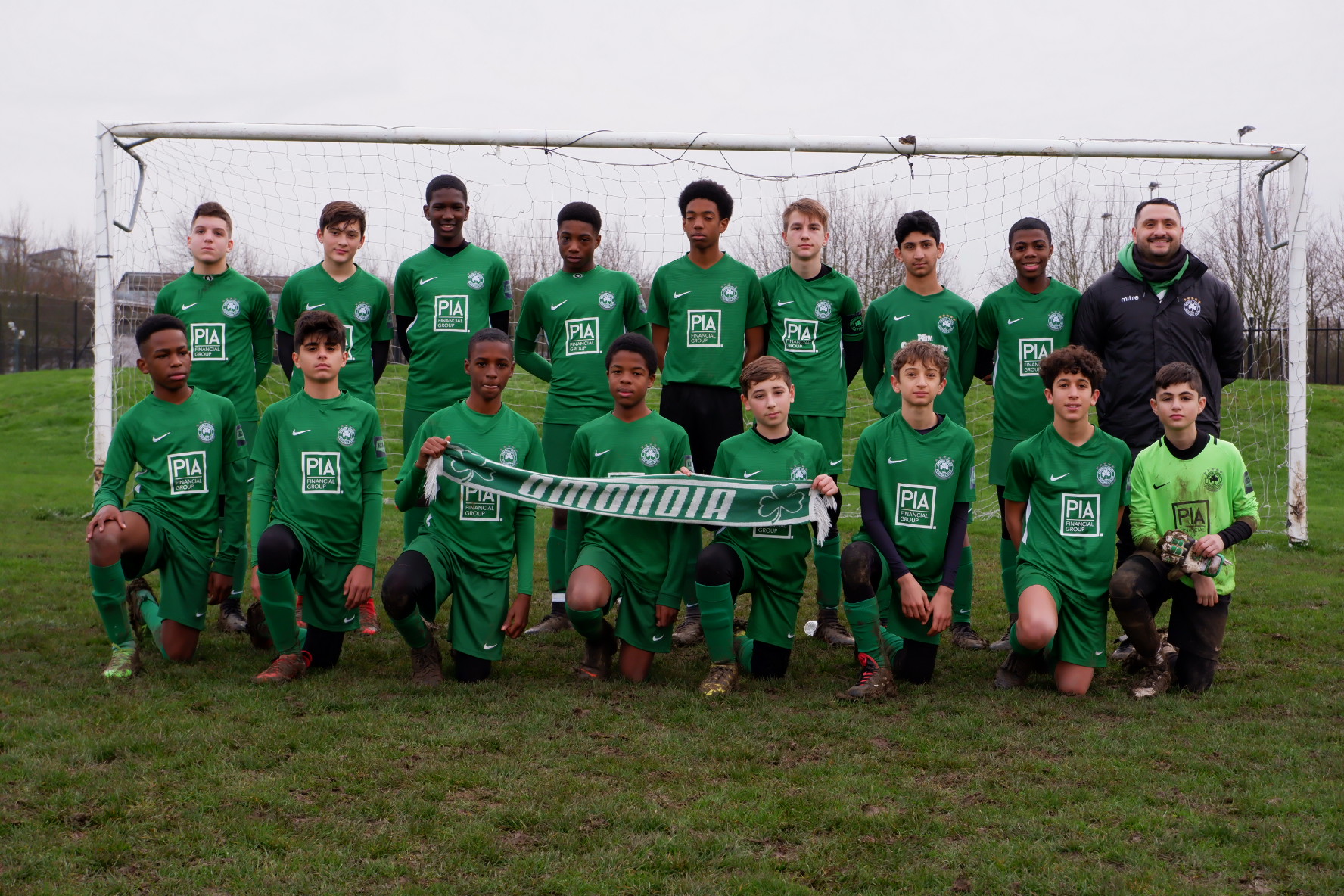 There were plenty of positive performances and plenty of goals for community grassroots club Omonia Youth FC, sponsored by PIA Financial Group and Philip Ross Solicitors. With many league campaigns coming to an end, Spring Cup and Plate tournaments are keeping the fixture list busy.

In the their Spring Plate group match, Michael Pieri’s Under 14 White put on an almost faultless performance in very, very windy and difficult conditions. Playing with what felt like a hurricane on their backs, the Under 14 White took a deserved 2-0 lead into half time. With the wind now against them, they had to adjust their tactics and they executed superbly the half time instructions. The boys played some beautiful one-touch football which culminated in possibly the team’s goal of the season. Several first time passes were exchanged in midfield which created a two v one on the right hand side. A wonderful first time cross by Yianni Sophocleous was met perfectly by Santino Raia who volleyed into the bottom corner. The opposition were never in it but a clearance off the line Malekai Thomas and brilliant point blank save from Stefanos Pieri preserved the clean sheet for a thoroughly satisfying win. The other goals were scored by Itiel Omadjela (2), Alfonso Rosselli and Emmanuel Onouha-Nzeh. Man of the Match was Luc Hysa.

Nick Georgiou and Dino’s Under 16 White also put on a great performance to win their league game 1-0. All the boys gave a hundred per cent effort from the beginning of the game until the very end and they deservedly got their reward. The wind did not make it easy for anyone but the boys did their job and managed to hold on to their lead which we got in the first half. Nick was rightly proud of the team. Apostolos Tziatzios got the goals and shared the Man of the Match award with Stefanos Kizas

In the quarter-final of the League Cup Omi and Stel’s Under 13 Green lost their quarter-final 3-1 after extra time. Jamal M got the only goal with Mikey O named Man of the Match.

Mario Demetriou, Johnny Othona and Elvis Leon’s Under 12 Green put in another strong performance as they won 4-1. Alex (2), Luca, and Theo with goals with Aaron named Man of the Match.

Savva Zavros and David Poncia’s Under 13 Gold played a team a division higher in their Spring Cup group match and it proved to be one of the team’s best performances of the season. The boys all showed excellent communication, commitment and there was non-stop action from start to finish in what was a very enjoyable match. Savva and David were proud of their team as they went on to win 2-1. Valantis Zachariou got both goals with Zak Naji awarded Man of the Match.

Chris Gregoriou and Andy Kyracou’s under 18 White lost their Spring Shield match in horrible windy and wet conditions 3-2. George Kyriacou and Nicholas Gregoriou got the goals with Josh Barry named Man of the Match.