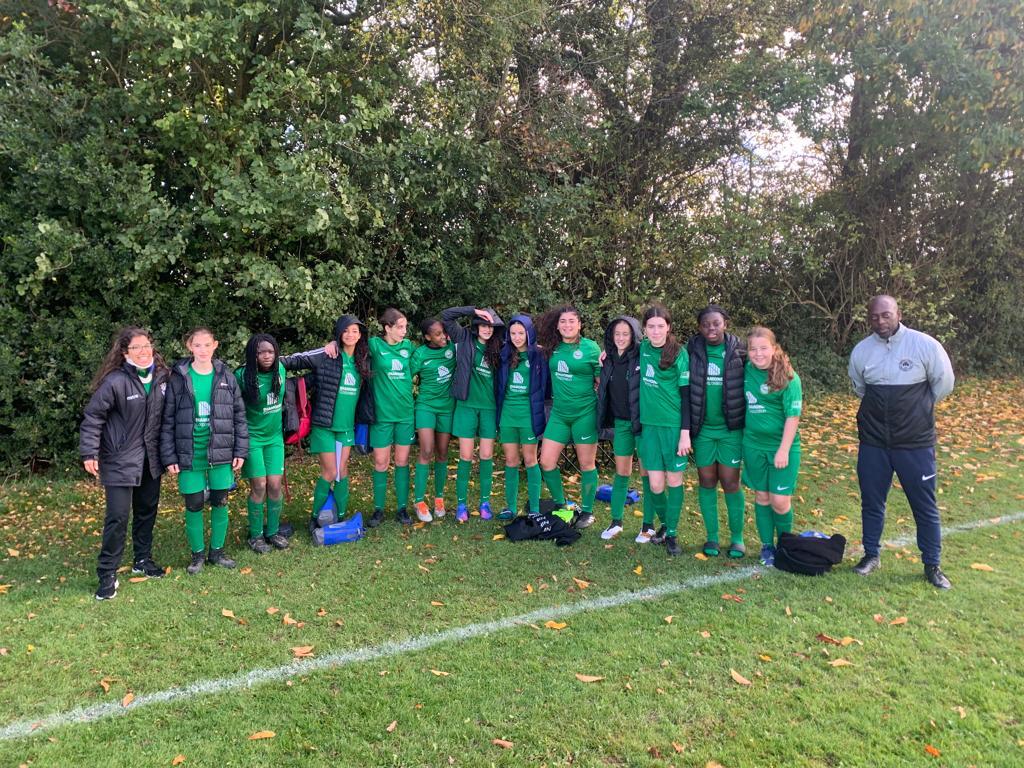 There were some good performances last weekend from the many teams of community grassroots club Omonia Youth FC who are sponsored by Diamond Corp. Ltd

Sophia Karanicholas and Samuel Arthur Under 15 Girls continued their recent good form and performances. From the outset they knew it would be a tough game as they arrived ot th match with only 11 players. The objective on this match day was to try and maintain possession. The game was very scrappy with no team able to keeps the ball for more than a couple of passes and what broke this cycle for the Omonia Youth girls was scoring an early goal. Even though the position responded and equalised, the Under 15 Girls took their performance to another level and struck three unanswered goals in the next 20 minutes. Shekhinah was the difference and she ran riot on the pitch scoring six goals in total – an incredible performance from her. On reflection, it was a hard earned victory with, due in part to half the team playing out of position. Player of the match was awarded to Temi who was just fearless on the ball and winning every tackle she went in for. She maintained possession brilliantly throughout the game.

Savva Zavros and David Poncia’s Under 18 Gold made it two victories in successive weeks in a match where they were by far the better team. Rotation was at the heart of the selection process and was something that continued throughout the game. Even though this did effect the team’s control in parts of the second half, development trade off is worth it and a 4-1 win cannot be argued against either. Goals were scored by Leo (2), Nico and Ky. Man of the Match was awarded to Callum.

Michael Pieri and Harry Theodorou’s Under 18 White endured a frustrating morning as their team had to come from behind to salvaged a 3-3 draw. There was too much complacency in what was an error-strewn display. The only real positive to take from the game was the fighting spirit at the end of the game to score the equalising goal. Goals were scored by Andreas Stavrinou, Rohan and Edwin. Man of the Match was awarded to Michael Mina.

Jason Plysi and Tony Stylianides’ Under 12 Lion Girls put in another positive display. Reflecting on the match, coach Jason thought  the Omonia Youth girls were the better team and were rather unfortunate not to capitalise on the chances they created. The majority of the game was played in the opposition half and they had very few opportunities to score. At half time team, the talk seemed to have helped and the girls raised the tempo and they went on to equalise early in the second half with a well taken goal thanks to a fantastic piece of control to create then space to shoot. Te opposition went ahead again only for the Omonia Youth girls to show tremendous fighting spirit to try and get the equaliser – a clear indication of great team spirit and attitude. Player of the match was awarded to Dolsie who didn’t stop running and pressuring the opposition and who was rewarded with her team’s only goal of the game.

Myri Demetriou and Kyri Eleftheriou’s Under 14 White scored another hatful of goals as they ran away with all three points winning 12-4. It was a great performance from the boys, who dominated the game from start to finish. The big pitch at Little Heath gave them the room to really apply the work they’ve put in to quick transitional play, playing between the lines with better speed and quality, making supportive runs from deep. In this game they did all of that to devastating effect. Goals came from all angles, crosses, through balls, runs from midfield, and from edge of the box. Both Kyri and M<yri could not have asked more from their team. Goals were scored by Andre (3), Nicholas (3), Andreas (2), Charlie, Kordian, Kyri and Lewis. Man of Match was awarded tio Kyri, a new addition to the team who was superb in a central midfield position.

Mike Koumi, Adam Broomfield and Panny Panayiotou’s Under 15 White team missed too many chances and conceded goals against the long ball in a 2-0 defeat. The Under 15 White started brightly and controlled the opening half hour without taking the numerous chances they created while their opponents sat back in a low block and began playing long balls which led to the game becoming scrappy. Both goals came from long balls and while the Udner 15 White still create plenty of chances, they simply could not put the ball into the back of the net. Man of the Match was awarded to Georgio for a tireless performance as striker.

Zeno Vryonides and Elias Neocleous Under 15 Green bounced back from defeat the previous week to win 5-2. Great play from the wing backs defending counter attacks and also winning the ball and to create great goal scoring chances. The boys were defensively solid with a strong back line. What gave them the edge this week was a face-paced attack. Man of the Match was awarded to the team’s new goalkeeper Daniel making his debut, Goals were scored by Nathanal (2), Michael, Aleks and Freddie

Nick Paraskeva and George Agrotis’ Under 12 White put on a fantastic  performance to win 4-1. The team’s main objective of the match was to keep possession of the ball and reduce attempts on their goal. The boys were also tasked with using a high press with high intensity when out of possession and this resulted in two of the four goals scored. Goal-scorers were Christoforo (2), Roman and Zacki Chris Gregoriou’s Men’s Team, who are sponsored by Crown Mobile Tyres and CMB Partners were comfortable winners in their first Middlesex Cup tie of the season winning 3-1 thanks to goals from Dani Ndoj (2) anad Emmanuel Ejembi.