Goals galore for U14 Green 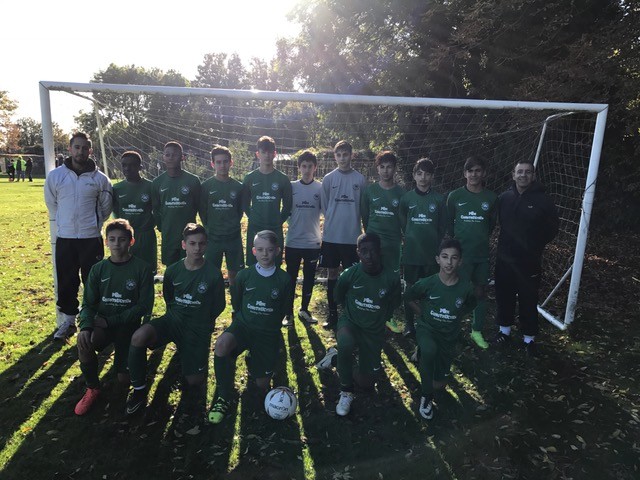 The Under 14 Greens put on another outstanding, goal-laden performance as they won 14-1 in the Mid Herts Cup. It is not the first time the team have hit double figures this season.

It is worth noting that the result sends the U14 Green into the second round of the Mid Herts Cup. The team are already into the quarter-final of the League Cup and are currently top of the Mid Herts Premier Division. A fantastic start to the season for Varney Michael and his coaching staff.

Mike Petrou and Kyri Haili saw their Under 13 White draw 2-2. Both Kyri and Mike commented on a great team performance and that the team were unfortunate not to come away with all three points. Goals were scored by Louis Petrou and David Preece with the Man of the Match awarded to Luca Coles
The Under 12 Silvers managers Harry Theodorou and George Sammoutis saw their boys win convincingly 4-0. “The boys played a blinder today”, was how George described it! Goals came from Joshan Patel (2), Joe Tullis and Nicholas Theodorou. The whole team was outstanding but Man of the Match was awarded to Oscar Hickley and Joshan Patel.

Chris and Jimmy Mousicos saw their Under 12 Gold come away with all three points after a thumping performance winning 8-1. Goal scorers were Louis Georgiou (2), Kayden Trey Virgo, Charlie Mousicos (with a technically brilliant volley from outside the box), Mike Pavlou, Sami Hristov, Cem Poyraz and Rayen Harboubi. Man of the Match was awarded to Rayen Harboubi

Mike Pieri’s Under 12 Whites lost 1-0 in a game where they totally dominated possession and had plenty of goalscoring opportunities. Man of the Match was Thomas Georgiou.

Nick Lingis’ Under 12 Green continued their fine form with a 5-2 win. Goals came from Georgios C (2), George A, Amaan S and Raul A. Man of the Match was Jack Anastasi.

The Under 15 Green, managed by Kyri Georgiou, narrowly lost 3-2. Goal scorers were Yianni and Michael. Man of the Match was Ellis.
Panos Papa-Michael and Andy Michael’s Under 13 Gold lost 5-1. Goal scored by George Constanti. Man of the Match given to Andreas Kyriacou.

Chris Gregoriou’s Under 15 White notched up another win thanks to Nicholas Gregoriou who got the game’s only goal. Andre Grant was named Man of the Match.
In the Cup Elia Constanti’s Under 16 Green lost 3-0 to a team from a higher division. Elia commented how well team played, hitting the bar twice and having a goal disallowed. Man of the Match was Charlie Constanti
Nick Zimaras’ Under 16 White won a tight game 1-0 at home. Goal was scored by Carlos Simao with Jacob Tatunda named Man of the Match.
The club will be celebrating another year of success with a Celebration Dinner and Dance on Sunday 4th December at the Regency Banqueting Suite in North London. The club will be producing a commemorative brochure for the evening and should you want to advertise please contact the club. There will also be a raffle and an auction of sporting memorabilia. Contact the club for more details.

The U11 Derby (White v Silver)