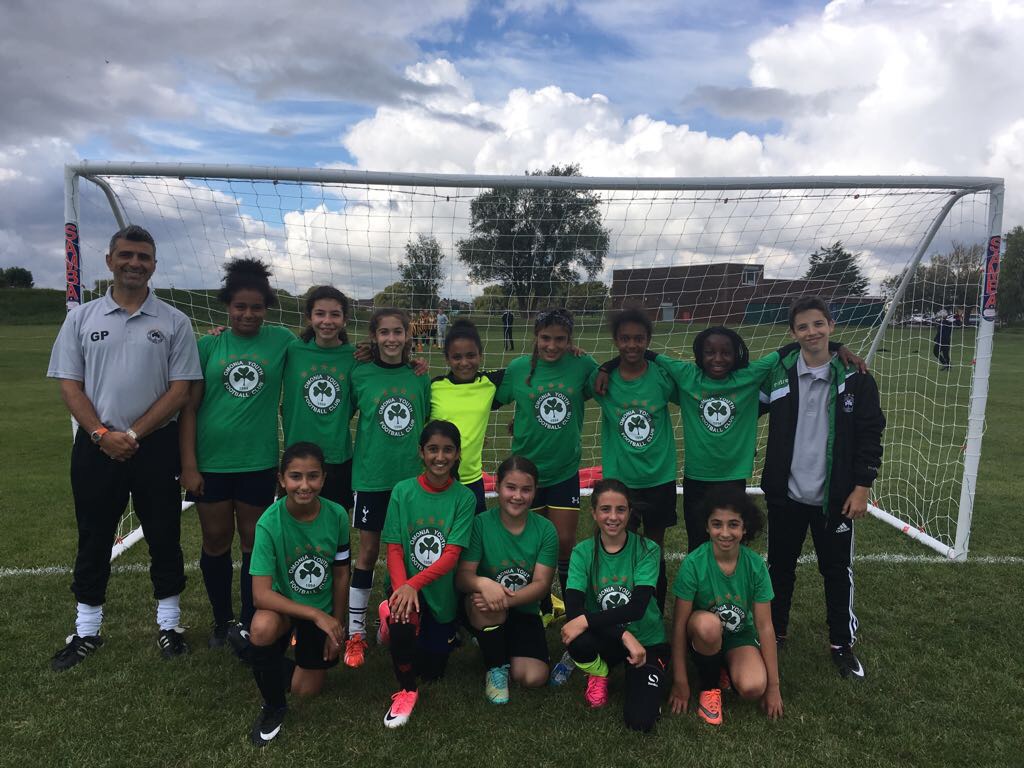 Community football club Omonia Youth FC, sponsored by P&M Construction UK Ltd, had plenty of reason to cheer this past weekend. Many teams recorded important results with the girls only squad making their competitive debut.

A proud George Pantelides was beaming as he led his Omonia Youth U13 Girls to their first ever competitive fixture. Playing in the Essex County Girls League, the squad and parents had to travel to Canvey Island for their fixture. Although the team came away having lost the match 4-0, it was a wonderful learning experience for the girls who put in a great performance. The team battled gamely right to the final whistle and even though they could not convert any of the goalscoring opportunities they created, they were cheered by a fantastic away support. Manager George and coach Alex have every right to be excited for the future. Player of the Match was Sophia Zavrou Blackstock.

Elsewhere, many teams were in cup action with a mixture of results.

Michael Pieri’s Under 13 White suffered a 5-0 defeat against a team in a higher division. Owen Bluffield was named Man of the Match.

Harry Theodorou and George Sammoutis’ Under Silver also went out of the cup losing 5-1 to a team in the division above. It was a good performance from the boys against a good team but they ran out of steam in the second half.  Anthony Antoniou got the only goal with Jakub Wojciechowski and Joe Tullis named joint Man of the Match

By contrast, Nick Lingis’ U13 Green got through their tie but they needed penalties to do so after drawing 1-1 after extra time. It was great performance from all the boys against a very physical team. Raul got the goal with the whole team named Man of the Match.

Omi Omirou’s Under 12 Green went out of the League Cup after losing 4-3 after extra time.

Leo Ioannou scored two goals and was named Man of the Match. Jamal Muhammed go the other goal.

Michael Petrou and Kyri Haili’s Under 14 White were taken all the way by their opponents in a 4-4 thriller as their League Cup tie went to penalties. The U14 White came away the winners having won the penalty shoot-out 5-4. Goal scorers were Alex Papaloizou (2), Louis Petrou and PG with Luca Coles named Man of the Match.

Another Under 14 won their League Cup tie. Demi Shiamishis’ Under 14 Green three times came back from a goal down to take the match into extra time where they powered home two goals to win 5-3. Manager Demi described the performance as “A very determined and energetic display from Omonia having lost to the same team last week 4-0.”

Goal scorers were Julian Zelli (2) and Alexis Georgiou with two own goals too. Man of the Match was Louis O’Sullivan.

Tony Kromidias and Mario Stavrou’s Under 12 White came up against strong opposition but ultimately succumbed to a 5-1 defeat. Goal scorer and Man of the Match was Alex Stylianou.

Two excellent results from the Under 16 team saw both progress to the next round of the Cup.

Chris Gregoriou’s Under 16 White won 4-1 in what he described as “…a dominant and powerful performance against a good team. We played some great football with skill and flair at important times to come back from 1-0 down with 4 good goals.”

Goals were scored by Max Alan (2), Stavros Konstantinidis and Antonio Gelagotellis. Liam Togher was named Man of the Match.

Kyri Georgiou’s Under 16 Green were not to be outdone as they beat a team from the top division 4-1. It was great result and fantastic performance against an established top division team

Goal scorers were Solos (2), Yianni and Jamal. Man of the Match was Andrew Kirtsides

Nick Zimaras’ Under 18 White went out of the League Cup losing 4-2. Goal scorers were Rosley, and Charlie with Charlie Constanti named Man of the Match.

Finally, the Cup action is concluded with the biggest win of the weekend Savvas Zavros’ Under 12 Golds won their as League Cup tie 8-3. Goal scorers were Charlie Philippou (2), Leo Capsalis (2), Callum Howley (2), Tyla Aydin and Nico Shiamishis. The whole team deserved their Man of the Match award.

Chris and Jimmy Mousicos’ Under 13 Gold made it two wins out of two in their debut season in the top division thanks to a convincing 4-1 win. Kayden Trey Virgo (2), Aaron Lewis and Michael Pavlou got the goals with Aaron also named Man of the Match.

Nick Geogiou and Kenny Gregori’s Under 15 White narrowly lost 2-1 in the league. Overall it was a good performance but unfortunately the team couldn’t convert their many chances into goals.

The goal scored was an own goal with Alex Paphitis named Man of the Match.

Omonia Youth FC have this season got a team playing in the London Youth Premier League, a league which links grass roots and professional Academy teams. On Sunday the U15 managed by Panos Papa-Michael took the field against Crystal Palace in what was the opening ceremony for the new league season. The U15s won 2-0 thanks to goals from Fab and Yousef. The performance was described as a “…great debut for our boys in their new league in a very high tempo game. It is a much higher standard of football and fitness and the boys did our club proud.”

In the Mid Herts Premier League the coaching staff of the U15 Greens were suitably pleased as they saw their team start their league season away to the current champions who were undefeated the previous season. In a fantastic first half which ended 2-2 the winning goal came mid-way through the second half. A great start to the season.

Goal scorers were Tobenna Abanna (2) and George Stasi with Lawrence Young named Man of the Match on his debut for the team. In addition, the U15 Greens have more news to cheer as two of their players have been selected to represent Hertfordshire County Schools