Five-goal thriller in the Omonia Youth FC Under 18 Derby 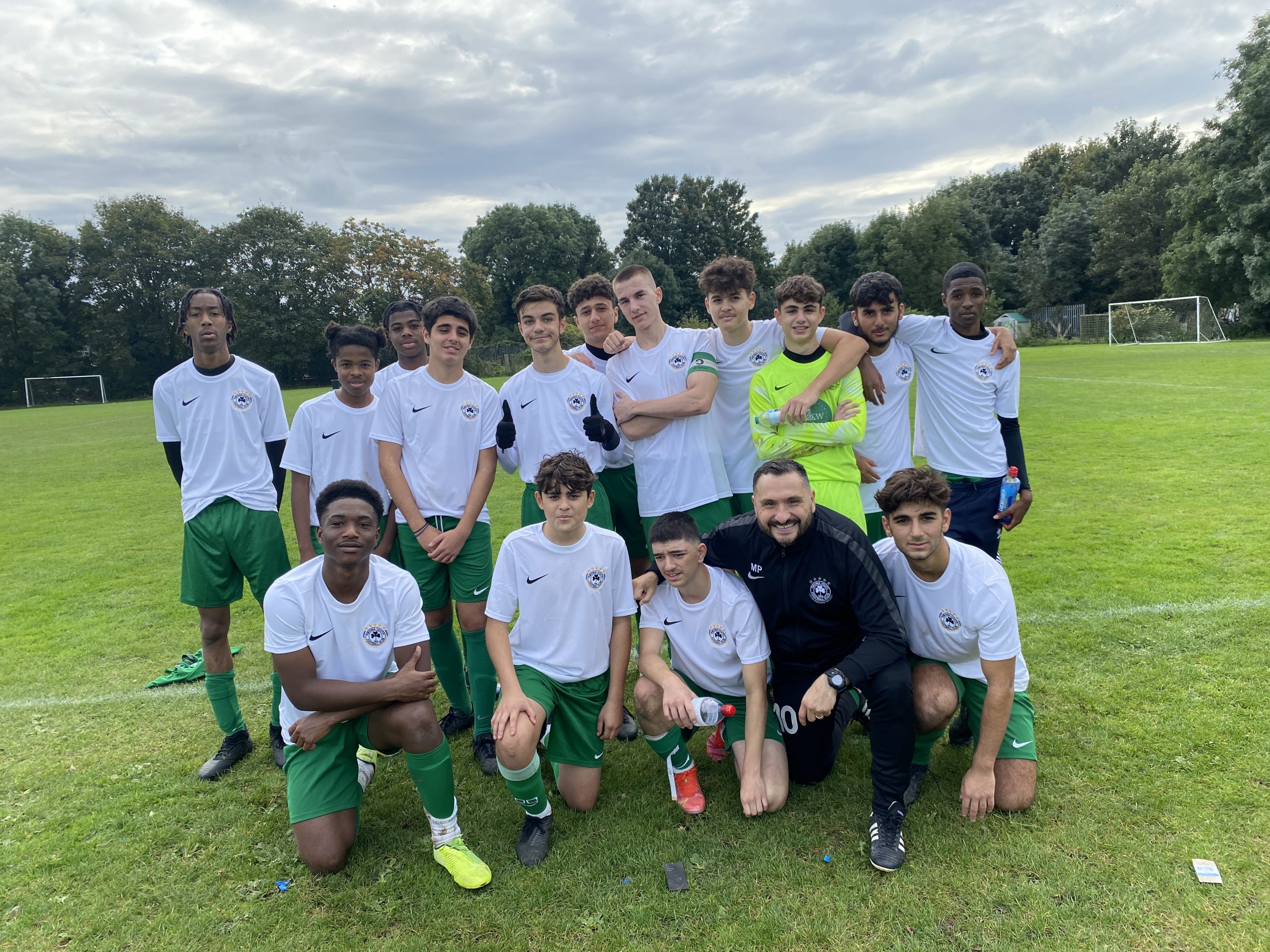 There were plenty of goals, excitement and good performances from the many teams of community grassroots club Omonia Youth FC, sponsored by Spector, Constant & Williams, Vas Barbers and V Jewellers. The match of the day was the first under 18 Derby of the season where the result was in doubt right to the last minute of the game.

In a pulsating and full-blooded encounter at the Radiomarathon Centre in Enfield, the first Under 18 Derby took place between Michael Pieri’s Under 18 White and Harry Theodorou’s Under 18 Silver. Both sides showed tremendous commitment with tackles flying in everywhere, great saves, several bookings, missed open goals and fantastic celebrations in what was a five-goal thriller.

The Under 18 White went ahead early on in the match thanks to a well-worked move with Noel Allen slotting home. A chance to double the lead went begging as they then missed an open goal. With the game moving towards half time, the Under 18 Silver equalised and the momentum shifted to them. After the break, a fizzing long-range effort from Kyri hit the back of the net to give the Under Silver a deserved lead and which led to excited scenes of celebration. With 20 minutes of the match to go Under 18 White equalised thanks to a debut goal from Lucas Oladejo who ran through and calmly placed the ball beyond the advancing goalkeeper. With momentum now shifted, a corner for the Under 18 White four minutes from time led to the winning goal, scored by Godwin Obeng. This too led to delirious celebrations. With the game inching to its conclusion, the Under 18 Silver had the chance to equalise but just like Under 18 White earlier in the match, they too missed an open goal. Under 18 White won 3-2 in a match that was nervy, exciting and full of drama for the large crowd in attendance. The parents and supporters who watched certainly added to the atmosphere. Man of the Match for the Under 18 White was awarded to Godwin Obeng and Sami Hristov.

Chris Gregoriou’s Men’s Team, who play in the KOPA League and are sponsored by Crown Mobile Tyres, Athletic Development Club, The Master Locksmith and RAMEK asset management recorded their first win of the season against a team that beat them heavily last season. The result, and more importantly the performance, was further evidence of the positive development of the team. There were solid performances all over the pitch, the players listened and carried out instructions in what was a perfectly executed tactical display to come out 2-1 winners. Goalscorers were Donaldo Ndoj and Steven Wright. Man of the Match was awarded to Marco Geremia who bossed the midfield from start to finish.

Robert Protei and George Constantinou’s Under 14 Gold were concerned before the match as they had four important players missing, and so it proved as they went 1-0 down very early on. However, the boys rallied themselves, started playing their brand of football and very quickly scored twice to eventually run out 6-4 winners. Gabriel was named Man of the Match for the way he controlled the game from the back.

Savva Zavros and David Poncia’s Under 16 Gold played an excellent match and took the game to the opposition for the best part of 80 minutes. They were unlucky not to have scored two or three goals as they drew 0-0.

The Under 12 Girls Falcons continue to show improvement with strong performances from all the players, especially the defence, which was reflected in Tia N getting Player of the Match. Tia was an example of a great defender today with lots of great tackles, and being in the right place with make vital clearances. The Falcons pushed the opposition back on numerous occasions and created many good opportunities going forward. It was a gutsy performance and well done to each one of the girls for such positive play.

The Under 12 Girls Eagles went toe-to-toe with the league leaders, matching them all the way. Georgia, who was captaining the team for the first time this season, kept everyone organised and worked tirelessly. The girls weren’t just repelling opposition attacks they were building really dynamic counter attacks of their own. Elize and Aanya were working like clockwork together behind Sophia who was making her first start up front for the Eagles. Her good positional sense meant she had some decent chances. Melina came on as striker midway through and showed some early promise but the score was level at half time.

During the interval, the team talked about teamwork, keeping their shape and thinking about how to use space and the girls heeded the advice. Liza, Elysia and Andreana really stepped up to give the team a solid foundation to build on, to go forward and keep attacking the opposition their defence. Elysia in particular showed excellent awareness and strength at the back to keep their forwards at bay. Things were really clicking up front and Melina, the super sub, finally broke the deadlock. The Eagles defended superbly the remainder of the match and with the opposition having to commit more and more players to try and find equaliser, a breakaway goal from Andreana, her first for the team, doubled the lead for a final 2-0 win. It truly was an epic and enjoyable contest played in really, really good spirits. Girl of the Match was Melina for stepping in as sub and breaking the deadlock.

Kerem Denizer and Paul Pavlou’s Under 12 Green narrowly lost 4-3 in the League Cup kin what was described as a very positive game. The showed some great link up play as the boys battled to come back from a goal down, then 2-1 down before equalising again at 3-3. Sadly, they conceded what proved to be the winning goal minutes from the end of the match but there were so many positives to take from the game which has increased the boys’ confidence to battle as a team. Man of the Match was Jemiah Edwards who scored a hat-trick with Huseyin-Emre Denizer being given the Most Contributor award.

The Under 11 Girls Lions enjoyed a game of two halves, to coin an often-used cliché! The girls got off to a slow start but gradually built-up momentum. The half time team talk was important and after a few changes, the second half was a completely different proposition. The team was better on the ball, there was better passing and the girls took the game to the opposition. The girls also showed great commitment. Special mentions to Mahdi in defence, Isabella and Player of the Match Melina.

Mike Koumi, Adam Broomfeld and Pany Panayiotou’s Under 14 White suffered a narrow 2-1 defeat in a tight game against strong opposition. It took Under 14 White a little time to settle but once they did, they started to threaten. Unfortunately, against the run of play they conceded and with the boys sitting off their opponents, they conceded a second just before half time. A positive half time talk with some changes in positions saw the Under 14 White boss the second half, using the overlap to good effect. They pulled a goal back but despite many chances created, they couldn’t find an equaliser. It was though a great second half performance. Georgie got the only goal. William was named joint Man of the Match for an excellent all round midfield performance with Jesiah for being solid and committed at the back

George Pantelides’ Under 18 Girls lost 5-1 but there were pleasing signs as the team beds in several new players into the squad. The score was not a reflection of the performance as a couple of avoidable errors in defence and some reluctance to shoot when on the attack would’ve drastically changed the final score. The team are looking for a goalkeeper, so if you are reading this and are interested, please contact the club. Player of the Match was awarded to Shira Myers, one of the new recruits, who was comfortable on the ball throughout.