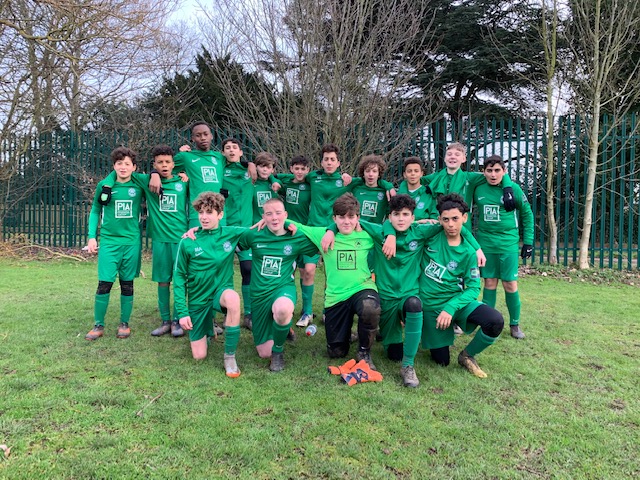 There was plenty to celebrate for community grassroots club Omonia Youth FC, sponsored by PIA Financial Group and Philip Ross Solicitors as many teams posted impressive cup results and performances, not least the Under 14 Gold who won a dramatic penalty shoot-out to take their place in the Junior League Cup Final.

Savva Zavros and David Poncia’s Under 14 Gold on Sunday reached their first ever final winning 4-2 on penalties. Having started off slow, they conceded in first few minutes of the first half having had to contend with consistent long balls from their opposition. Once they had adapted their style of play they got back into the game and full time the score was 1-1 meaning the game went into extra-time. With just seven mionutes to go, the udner 14 Gold were 3-1 and going out of the cup but resilience and a steely determination saw the boys score the goals to take the game into a penalty shoot-out where they held their nerve to win 4-2. Manager Savva said of the game: “It was a brave and determined performance by our boys. Well done.”

Michael Pieri’s Under 15 White unfortunately couldn’t progress in the cup as they let a 3-0 lead slip to prove the sporting adage “hard work beats talent when talent doesn’t work hard” correct. A disciplined first half performance saw them go into half time 2-0 up. Quickly in the second half they extended the lead to 3-0 and then inexplicably stopped working hard. The position never gave up and their determination saw them clinch a semi-final place winning 4-3. Goals for the Under 15 White came from Noel, Yianni (direct from a corner) and a penalty from Christo. A disappointing end to the game but many lessons to be learned.

In contrast, Nick Lingis’ and Mario Christoforou Under 15 Green won their tie to make the last four with a 5-2 win. Man of the Match Georgios Christoforou netted a hat trick with Joe K getting the other two goals.

Kyri Georgiou’s Under 18 Green also made it to the last four of their League Cup winning 3-1 at home. An excellent first half performance set the foundation which allowed the boys to finish the game comfortably. Goal scorers were Yianni Polycarpou, Andrew Kirtsides and Ellis Charalambous. Man of the Match was awarded to Michael Speers.

Nick Georgiou and Dino Savva’s Under 18 Gold won again in the league. A strong team performance in extremely difficult pitch conditions and without their recognised goalkeeper. Lots of effort and determination to adapt their style of play and to keep up the pressure until the very end. Nick was “…very proud of the boys…” in a 4-3 win.

Robert Protei and George Constantinou’s Under 12 Gold won 4-1. The boys had total control of the game from the beginning. They recovered the ball well and generally their off the ball work was better. On the attacking side, the boys were not as fluent as normal but that did not stop Man of the Match Pablo scoring a hat trick! Christo was also named Man of the Match who was putting in some fantastic crosses.

Chris Gregoriou’s Under 18 White put in a really good performance and capped it off with  clean sheet. The Under 18 White got off to great start going 1-0 up half way through the first half with a quality finish by Daniel. This helped settle the team into the game playing some really good football. The second half was even better, as the team’s performance went up another level which saw them score three more times for a comfortable 4-0 win.

Goals were scored by Daniel Reid-O’Gilvie (2), Chris Yiannitsarou and Steven Wright. Man of the Match was Ahmet Mustafa who bossed the midfield.

Mario Demetriou, Johnny Othona and Elvis Leon’s Under 13 Green lost 3-1 in a very competitive game where the boys showed a lot of passion and endeavour.

Finally Zeno Vryonides and Vas Simou’s Under 12 Green were superb as they beat a team who was on an 11 game unbeaten run. The boys were hard working, they supported each other and there was a real togetherness that culminated in a 3-2 win. Alec got all three goals with Kaz named Man of the Match.