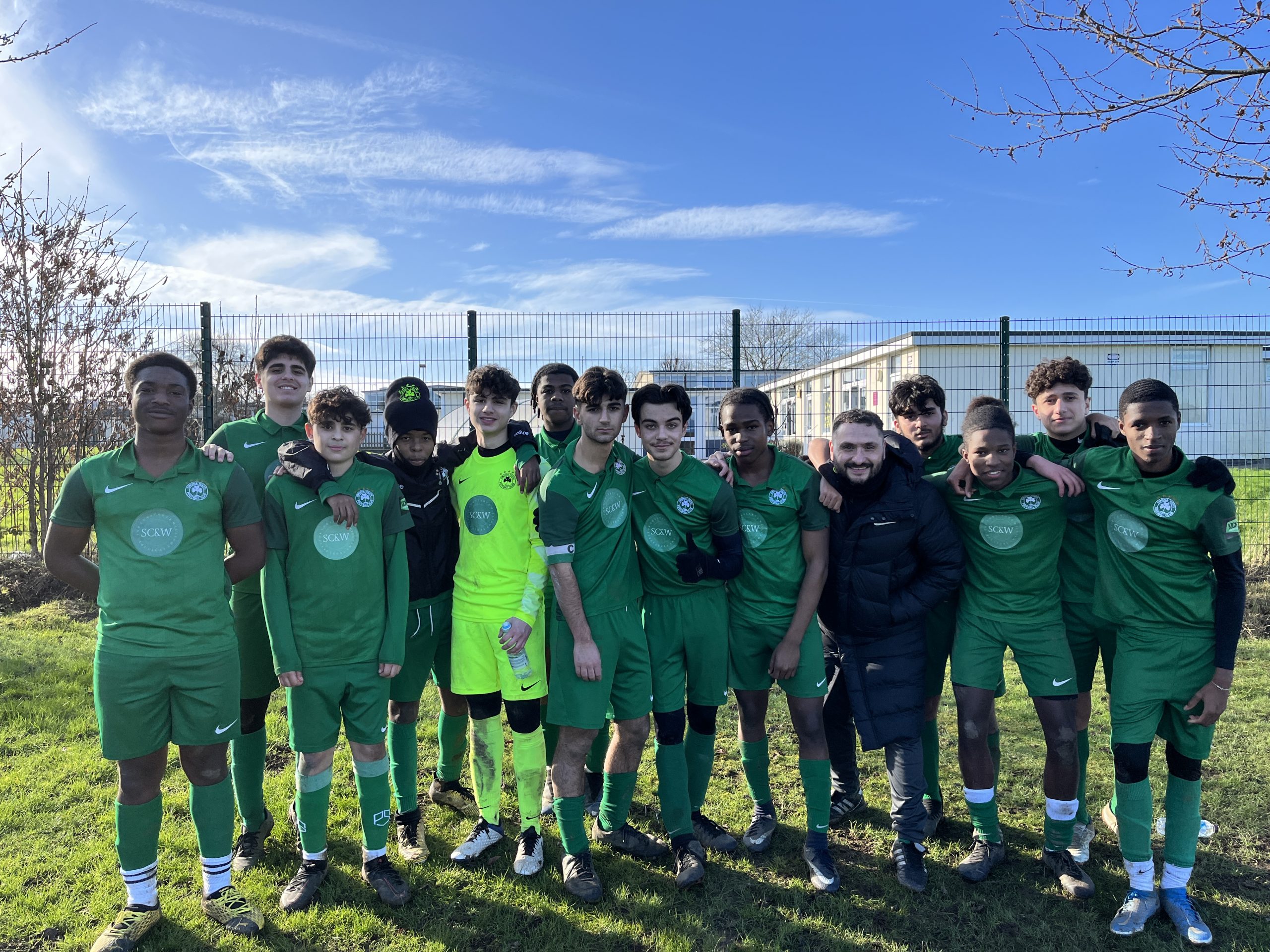 There were encouraging performances from the many teams of community grassroots club Omonia Youth FC, sponsored by Spector, Constant & Williams, Vas Barbers and V Jewellers.

Myri Demetriou and Kyri Eleftheriou’s Under 13 White got their Spring Cup group stage off to a winning start. On a cold and frosty morning, the sun came out and the boys took to the pitch in good spirits. After an ineffective start, where the pressure on the ball was not at its most intense, nor was their composure on the ball but once the team clicked into action, they simply had too much for their opponents.

Without playing at their fluid best, Under 13 White raced into a 3-0 lead thanks to a superb finish from Kleanthis from distance and then two very good finishes from Nicholas. The game at this was point was an exercise in retaining composure but a few apses in concentration saw the opposition craft some opportunities which required some great sweeper-keeping from Alessandro.

AT half time the team were asked to show more intensity and improve their passing and they did just that. An early lung bursting run and finish from Andre made it 4-0. The game was now secure and even though he opposition got a goal back before the Under 13 White got their fifth goal to round off a satisfying 5-1 win. The fifth gave Nicholas his hat-trick. Man of the Match was awarded to Alessandro whose willingness to sweep up when the opposition went through our midfield and defence was a massive positive. He also managed to pull of a handful of stunning saves and showing improvements week on week.

Zeno Vryonides, Mario Georgiades, Elias Neocleous and Vas Simou’s Under 14 Green put on a fantastic performance at home, scored plenty of goals to run out convincing 8-1 winners. What was pleasing was the number of shots on goal on goal both from within and outside the penalty area. There was one particularly brilliant goal from Aleks whose stunning ‘top-bins’ effort drew worthy praise and applause. Aleks scored a hat-trick and earned the Man of the Match award. The other goal scorers were Andrew C (2), Nathanal, Lewis and Andonis.

Mike Koumi, Adam Broomfield and Panny Panayiotou’s Under 14 White were back to league action and a produced a dominant performance. The 6-0 score line was reflective of the way the team played; they moved the ball quickly, used the width and took advantage of a big pitch to race. The Under 14 White raced into a two-goal lead inside five minutes and from then on controlled the tempo of the game. The team created numerous chances and scored two further goals before half time. The second half was in same vein with Under 14 White creating more goal scoring opportunities, adding two more goals. They even had a penalty saved. An encouraging display to take into the second half of the season. Goal scorers were Nick (2), Georgie, Luca, Thomas and William. Andrew was named Man of the Match for his outstanding work rate and composure at full back.

Savva Zavros and David Poncia’s Under 16 Gold suffered a heavy 12-0 defeat in the Challenge Cup. The score was 0-0 after 25 minutes but once the opposition scored twice, there was a noticeable change in mind-set from the Under 16 Gold. The match was a fantastic opportunity to play against a team which contained several excellent players looking to take their football journey to another level and an insight into how effort and hard work on the football, along with talent can be a potent force. Coach David was philosophical at the final whistle as he said: “There is nothing wrong with a footballing lesson that is played in the right spirit.”

Michael Pieri’s Under 18 White stay top of their division thanks to 2-1 away win. The team were missing several players but started brightly, dominating possession and creating opportunities to score. Profligate finishing prevented the boys taking the lead and the opposition goalkeeper making it difficult to score the first goal. Midway through the first half, a wonderful dribble down the line by Kyle Lapompe took him into in the penalty box where he was ceremoniously upended. The referee rightly pointed to the spot. Noel Allen stepped up to bury the resultant penalty. The start of the second half saw the opposition put pressure on the Under 18 White back line but a wonderful move down the left hand side, which started from from defence, yielded a second goal. Left back Andre Bachus drove forward and played a perfect pass to Emmanuel Onuoha-Nzeh whose superb dribble led to  scrambled finish by Andreas Fereos for a 2-0 lead. The boys were now comfortable and playing good football but three inexplicable errors in 30 seconds led to a goal back for the opposition. There were some nervy moments as the clock ticked past 50 minutes in the second half but the boys managed the game well to take three important points. The match was also officiated expertly by a young referee who was always in control. Man of the Match was awarded to Andreas Fereos who showed outstanding ability on the ball, including a beautiful nutmeg on the fullback, driving forward, creating opportunities and scoring what proved to be the winning goal.

Kerem Denizer’s Under 12 made a great start to the first half but unfortunately succumbed to a dramatic change in fortune that saw the opposition score five goals in the first half. It was nice to see substitute H come on and play in a right back position, and go on to assist his side’s only goal, with new signing Adam Choudhury chipping the goalkeeper in style which also warned him the Man of the Match award. Plenty of other boys played different positions and tried their best. Well done to H, Zac, Leo, Luca, Jemiah and Anastasi. Best contribution was given to Hermaan Steiner

It was Derby Day for Mary Tryphona’s Under 12 Girls as the Tigers faced off against the Lions in a great match that yielded many positives. All the girls were given player of the match with coaches and parents proud of the performances.

Sophia Karanicholas and Samuel Arthur Under 14 Girls produced what was described as an excellent performance and a huge transformation from recent games. The girls were very disciplined and more importantly put on a wonderful team effort. Every player executed their individual goals and objectives brilliantly and it was the first time the coaches saw so many passes leading to shots on goal. After the match, coach Sophia said she was: “Super proud of the girls today; they really showed us what they are capable of delivering both individually and as a team. Go Omonia girls!”

Goalscorers were Gina (2), Shekhinah and Orla. No one single player stood out as Player of the Match as the team as a whole were exceptional.

In non-competitive football, Nick Paraskeva and George Agrotis’ Under 11 White enjoyed an intense and exciting game who were playing in a new league on home ground. It was a really good test for the boys and they have started to incorporate and learn that it’s not just about Team A vs Team B, but also player in position A vs player in position B. In training and during the match they were tasked with identifying their opposing player to incorporate marking, tracking and taking responsibility for their position. A good eye-opener for them in a more physical division. What was pleasing too was that the opposition were a set of nice, respectful children which the crowd enjoyed.

Chris Gregoriou’s Mens team is sponsored by Crown Mobile Tyres and The Master Locksmith and last week returned to winning ways but were made to work hard for the three points. They started brightly and went 1-0 up on 15 minutes thanks to a lovely low drive shot from the edge of the box by Kay that found the bottom corner of the net. A lack of concentration at the back and the Men’s team found themselves 1-1 on 30 minutes. However, that setback seemed to be the trigger for the team to step up a gear and they responded with two quick goals; one a diving header by Andreas from a cross by Danaldo and then some good movement and quick passing led to debutant Markos bursting the net too to take a 3-1 into half time. A scrappy second half saw opponents Pantel pull a goal back against the run of play to make it 3-2 to set up a tense end to the game. The team missed so many goal scoring opportunities to put this game to bed with before Markos scored again to make the game safe at 4-2 win. Pantel did score again right at the end but a satisfying 4-3 win and three more points in the bag. 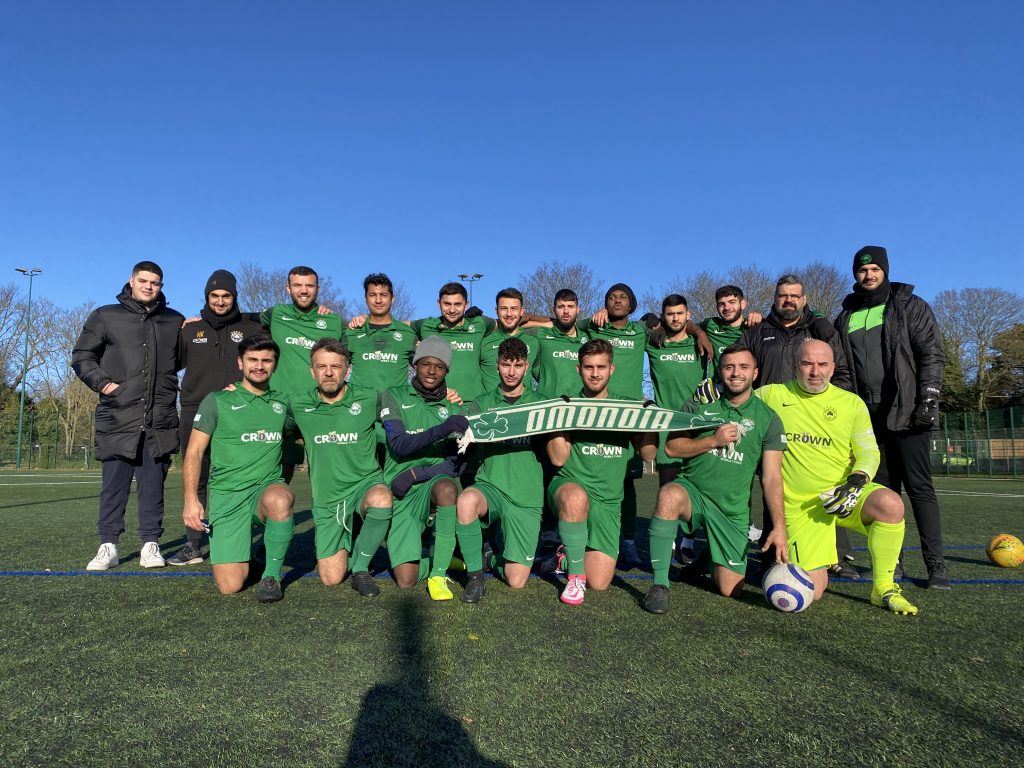