Last Sunday there were two derbies among the many matches for community grassroots club Omonia Youth FC, sponsored by PIA Financial Group and Philip Ross Solicitors.

First up was the Under 14 Derby between Savva Zavros and David Poncia’s Under 14 Gold and Adam Demetri and Evagoras Madrides’ Under 14 Silver.

In a tight and closely contested match, the Under 14 Silver came out on top by the odd goal in three. Both sets of coaches were very appreciative of each others teams and it was lovely to note that parents and supporters of both teams were also commended for their fantastic support. Brodie got both goals for the Under 14 Silver with Alexander M named Man of the Match.

The other derby of the game was in the age group up with Chris and Jimmy Mousicos’ Under 15 Gold taking on Nick Lingis and Mario Christoforou’s Under 15 Green. The match was decided by Man of the Match Georgios Christoforou’s hat-trick as he was the major difference between the two sides in a 4-1 win. Cameron J got the other goal.

In the league, Michael Pieri’s Under 15 White took the lead in the first half on a muddy, heavy pitch. With no substitutes to call on, fatigue inevitably set in and the opposition deservedly got their equaliser. With 10 minutes to go, they scored again to subject the Under 15 White to their first defeat in five games. Noel Allen kept his goal scoring run going with goalkeeper Stefanos Pieri named Man of the Match.

Kyri Georgiou’s Under 18 Green continued their good run with a 3-0 win at home in the league; a result which puts them joint top of the league

Goals were scored by Andrew Kirtsides,  Denis Gradica and an own goal. Leon Brotherton was Man of the Match.

Nick Georgiou and Dino Savva’s Under 18 Gold also won, taking home all three points thanks to a 2-1 away win. It was another strong performance this week from the Under 18 Gold who managed to go 1-0 up in the first 25 minutes. The boys fought back and equalised and thanks to some excellent saves from goalkeeper, Christos, they went into halftime 1-1. The team kept their shape and discipline in the second half and after an incredible second goal from Rivaldo they held on for the win. Joint Man of the Match Ws awarded to Rivaldo Dju and goalkeeper Christos Seferis.

Robert Protei and George Constantinou’s Under 12 Gold were three players down and therefore played with no substitutes. The boys played very well, created lots of opportunities to score but before they knew it, were two goals down. In the second half, Under 12 Gold came back, scored two goals and missed a penalty. In the last few minutes the opposition scored to make it 2-3. Man of the Match was George Markou. He has progressively been getting better and better this season and on Sunday he was outstanding.

Mike Petrou and Kyri Haili’s Under 16 White won 3-1 in their Challenge Cup tie. Louis Petrou , Valenti and David Preece were the scorers with Mathew Jobson named Man of the Match.

Barrinton Dutton’s Under 16 Green started brightly and raced into a 4-1 lead before suffering two injuries to an already depleted squad, forcing them to play with 10 men. The opposition rallied and got back to 4-4 before Under 16 Green showed their determination and refused to give up by scoring a last minute winner, which led to understandable wild celebrations. Final score 5-4 to Under 16 Green. Barrington was quick to praise his team by saying: “I am veryy, very proud of our boys today. They showed relentless energy, determination and pride.” Goals were scored by Louis O (2), Nicolas, Sami and Man of the Match Michael.

Mario Demetriou, Johnny Othona and Elvis Leon’s Under 13 Green lost 3-2 in a hard fought match which was enjoyed by all. Goals from Alex and Sebi. Harry was named Man of the Match

Mike Koumi and Adam Broomfeld’s Under 12 White also lost 3-2 in a game where they had most of the possession and played the better football but unable to turn that into goal chances. It was one of those games where the opposition had three chances and put them all away. Goals were scored by Ioannis and Ant P. Ant K was Man of the Match. 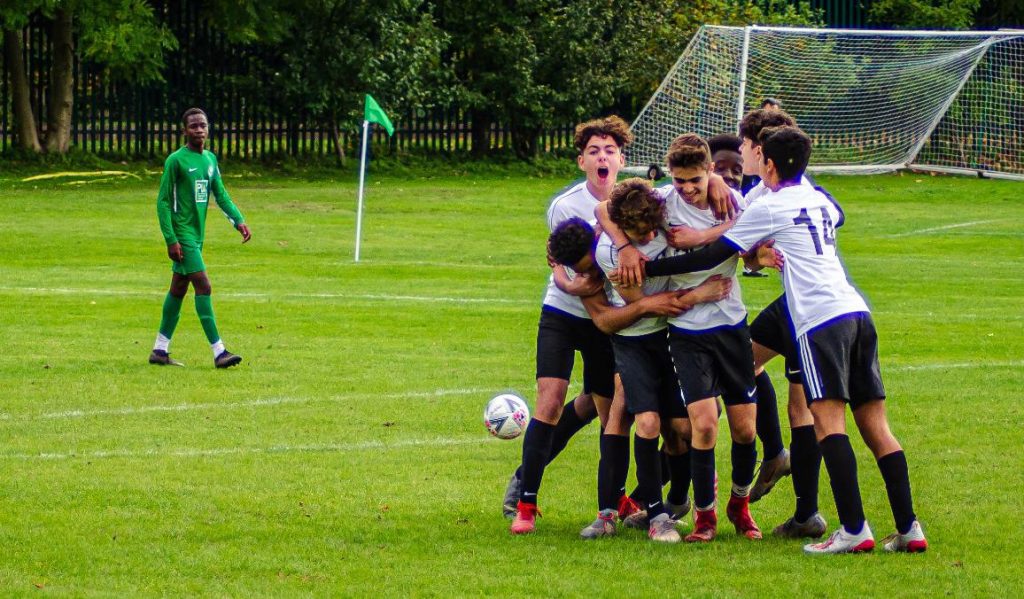