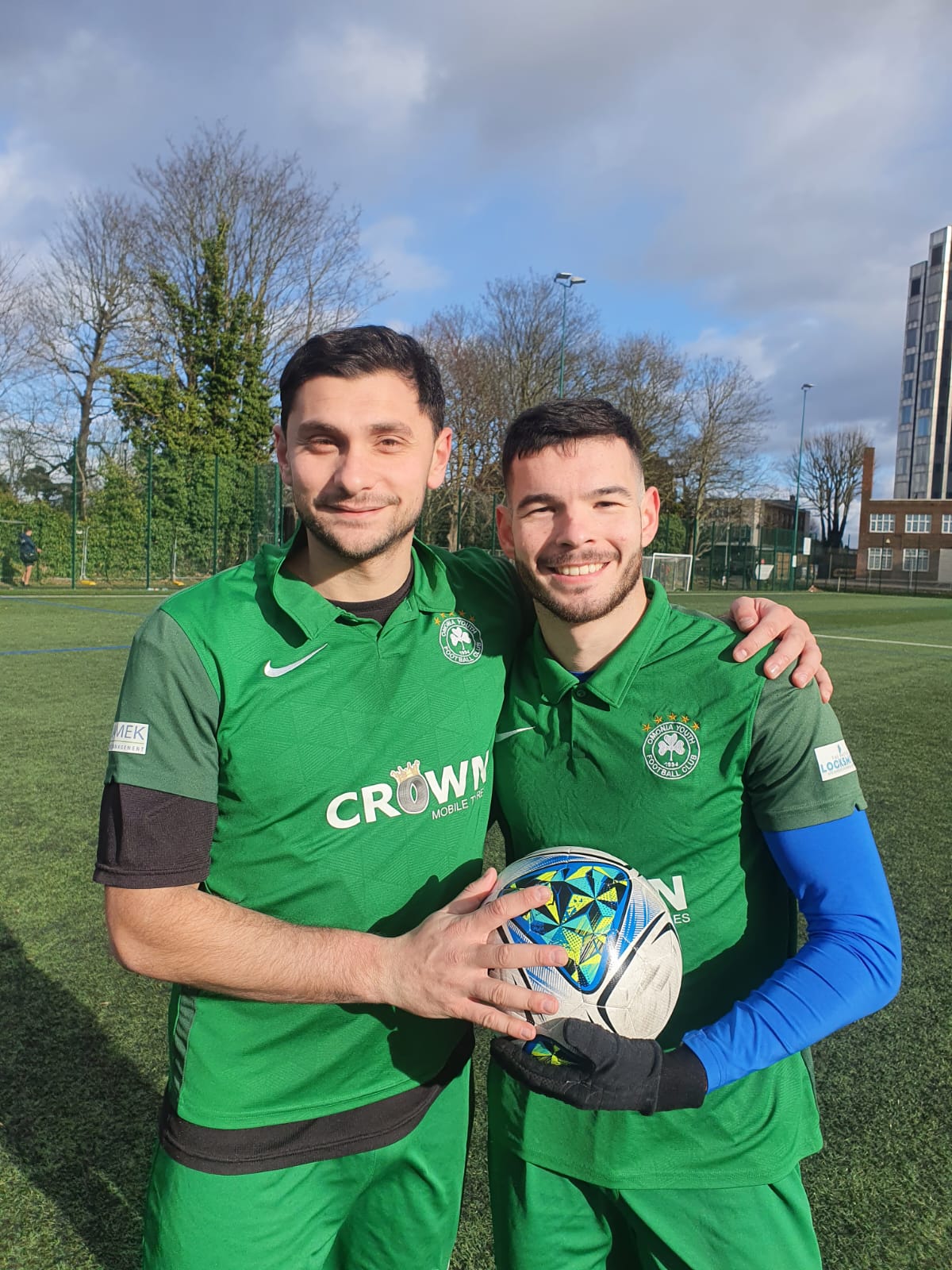 Community grassroots club Omonia Youth FC, sponsored by Spector, Constant & Williams, Vas Barbers and V Jewellers saw three of their teams record significant cup victories last weekend. In the Spring Cup Harrow Savva Zavros and David Poncia’s Under 16 Gold out in a great performance as they won 4-2 away. This was in stark contrast to their previous meeting earlier in the season when they suffered a heavy defeat and is evidence of their growth and maturity as a team. The victory outs the Under 16 Gold in a good position to qualify from the group stage. There were some individual fantastic performances including a special goal scored from the corner flag. Coach David said: “It was a solid performance in difficult conditions. They are a fantastic side to watch when they click.” Goals were scored by Man of the Match Anthony (2), Gino and Jono

Mike Koumi, Adam Broomfield and Panny Panayiotou’s Under 14 White booked their place in the last four of the League Cup after a close match and having to come from behind to win 3-2.

A slow start by the Under 14 saw them go 2-0 down in the opening 10 minutes. The boys were off the pace, were standing off their opponents and were generally being outplayed by their visitors. Slowly but surely, the Under 14 White got back into the game and scored a superb goal on the break by moving the ball quickly down the flank, using an overlap which led to a flick on and finish from Chris. The moved started from their corner!

In the second half Under 14 White dominated using the width of the pitch to their advantage, producing fast flowing football. Their equaliser came from a move involving five players. Despite creating numerous chances, it was 2-2 at full time. In extra-time, the Under 14 White continued to dominant but yielded no goals until a penalty was awarded for a handball which was expertly dispatched. Man of the Match Chris got all three goals in what was described as an all-action midfield display.

Chris Gregoriou’s Men’s team, who are sponsored by Crown Mobile Tyres and The Master Locksmith, were also in Cup action and like the Under 14 White are also through to the last four of the KOPA League Challenge Cup. It was a great display from the team which culminated in best result in men’s football as they struck six goals past their opponents to win 6-1. Chris described the match thus: “It was a complete performance today with really good football played all over the pitch. Well done too to the two hat-trick heroes today.” Three goals apiece were scored by Andreas Kyprianou and Markos Touroukis.

Sophia Karanicholas and Samuel Arthur’s Under 14 Girls continued their recent great run with another excellent performance and another win. Impressively the victory came against a team from a higher division. A brilliant and disciplined first half performance was rewarded with a few great team goals. The focus for the girls this week at training was “supportive play”. The team often makes good passes and the girls are quick to run forward but without questioning whether they are always the best option. The girls implemented their training session fantastically in match play and did their coaches and watching crowd proud. An experimental second half was well received by the girls with multiple players unfamiliar positions.

Mary Tryphona’s Under 11 Girls showed their commitment even though with several players missing they were still able to field two teams. Both teams played great, with the girls all stepping up to rotate as goalkeeper. The Tigers started slowly then got into the game as their passing improved as did their marking . Olivia G today stepped up and really ran the midfield. Xenia, Ava & Siena all rotated in goal . It was a tough match but the girls never gave up . The Lions came up against the toughest team in their division and the match-up didn’t faze the Omonia Youth FC girls. They all got stuck in and kept battling until the final whistle. Nadia made her debut and became part of the team while Ria, Eliana & Chiara Mia all rotated in goal.

Zeno Vryonides, Mario Georgiades, Elias Neocleous and Vas Simou’s Under 14 Green faced a team that outplayed them at the start of the season, but last Sunday the roles were reversed. The Under 14 Green dominated possession, gave little space away and wasted very few of the goal scoring opportunities they crafted as they came away with a satisfying 3-0 win. The Under 14 Green midfield kept control of the game while the defence was solid from the first minute and rarely gave the ball away. After the match Zeno said: “We created loads of chances and could have scored more. The boys showed fantastic footwork and their confidence is growing.” Goals were scored by Michael T

Nathanal, Andoni. Nathanal was named Man of the Match for the number of chances he created and his crazy skills and footwork!

The camaraderie and community spirit of the club is never better evidenced than when coaches and managers help each other out. On Sunday Chairman Myri Demetriou and coach J helped with the Under 11 Green. The boys gave their all, played as a unit, moving the ball around, exploiting gaps they found and creating some opportunities for one another. There is a real team bond among the group that enabled them to out on a good display. Man of the Match was awarded to CJ with Best Contributor given to Leo. All the players were rightly praised for their efforts and for the positive things they did during the match.

Abdullai Adejumo’s Under 12 Girls, the Eagles and the Falcons both had matches last Sunday and both performed admirably.  The Eagles were playing against one of the best teams in the league and although they played very well and fought hard, they were unfortunate that two girls took knocks and with no subs the match became even more difficult.  What was pleasing was that the girls seamlessly adapted to different positions throughout the game. Elize, who scored the Under 12 Girls only goal, started in goal and also played in defence, midfield and attack. Amelia showed that she’s coming on in leaps and bounds with a really confident performance as comfortable playing up front or in the midfield. Aanya put in a tireless performance covering ground as always but unfortunately took a knock. Ruby showed that she’s starting to think a bit more on the ball and about her positioning as well which is really promising and Andreana showed real fight embodying the spirit of this team. Then there was Daisy our ‘Girl of the Match’ who really impressed with her overall commitment, she was tasked to help shore up our defence today and she did a great job.

The Under 12 Girls Falcons were also in action and they too performed extremely well. The movement was much more fluid and some good passing was seen. The defence was also strong with some great clearances. Players of the Match went to Liza and Elisiya who totally deserved it, but there were also noteworthy performances from Faith, Claudia, Tia and Cassia. After the match Abdullai said: “I am extremely proud of the girls, my heart is beaming. Well done to all and let’s keep up the good work. Get that football and practice whenever you can!” 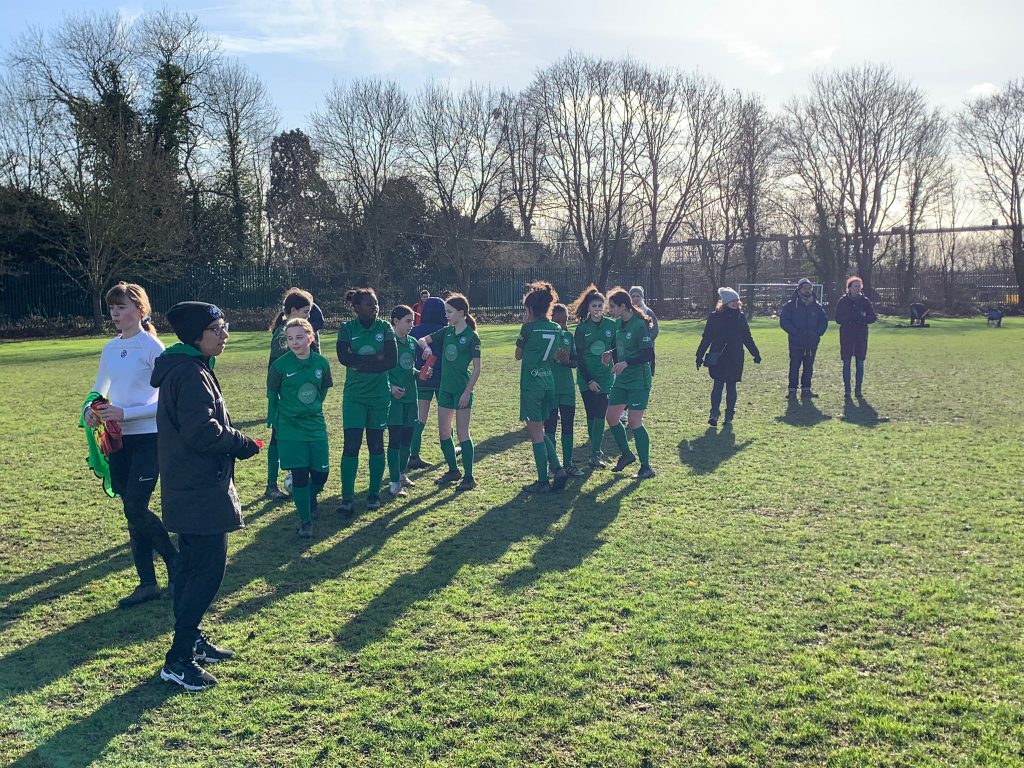