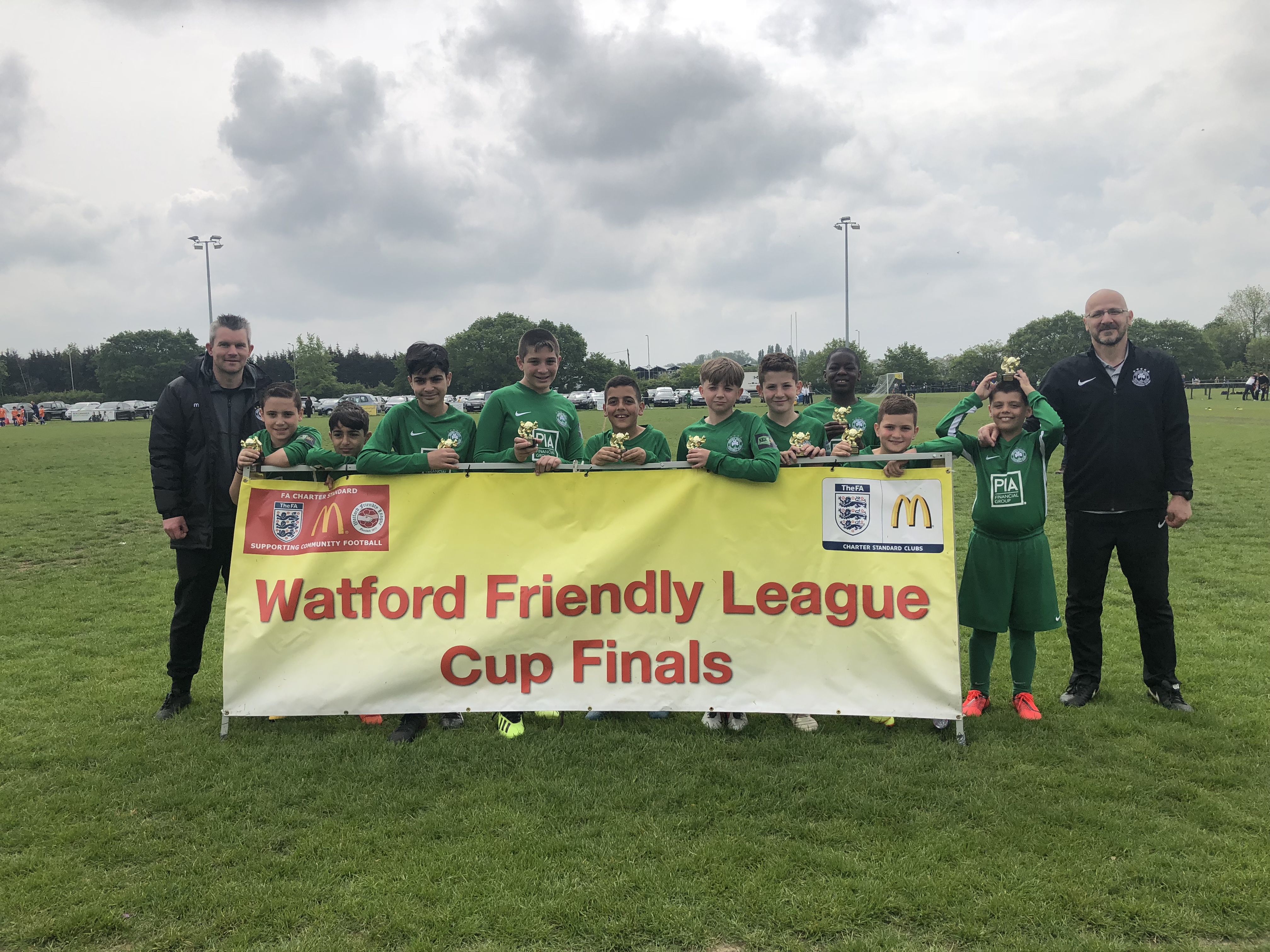 The Finals Day is organised by the Watford Friendly League with the club’s Under 16 White involved in the Spring Plate final, the Under 15 Gold in the Challenge Cup Final and the Under 11 White in the semi-final of the Challenge Cup. Unfortunately, all three Omonia Youth teams suffered defeat even though all three teams acquitted themselves superbly. On another day all three may well have come away with victories, but on this occasion, it was not to be.

In the morning Panos Papa-Michael, Elias Constanti and Andy Michael’s Under 15 Gold played their Challenge Cup Final in front of a large and appreciative crowd; a great atmosphere for the boys to savour and remember for years to come!

Unfortunately the result did not go their way, losing 4-2 against an opponent who have dominated the season by winning both the top Division Championship, the AFA County Cup and Middlesex County Cup (beating the Under 15 Gold in the semi-final!)

The game started well for the under 15 Gold as they kept possession and dominated for the first 20 minutes. However, an uncharacteristic mistake at the back cost them the first goal. This was followed by a quick second goal from a corner and it then took a little while for the Under 15 Gold to gather themselves and re-focus.

The boys managed to settle down again and continued to play good football. Soon there was a real lift as they pulled a goal back from George Constanti’s stunning 30 yard free-kick, which nestled in the top corner. Then just on half-time a fortunate rebound gave their opponents a goal which made it 3-1.

Under 15 Gold came out in the second half with great determination and pulled another goal back through Andreas Polycarpou after he headed in from a sweeping right to left move. The game was at this point becoming stretched as the Under 15 Gold started to take risks and it ended with their opponents scoring a fortunate fourth goal. The Under 15 Gold boys though never gave up and continued to push forward but it just wasn’t meant to be.

There were some excellent performances all around the pitch and every one of the squad tried to make an impact where possible. Even more pleasing was seeing every player give it their all and never give up – the Omonia Youth FC spirit was clearly there for all to see!

The coaches all wanted to give special thanks to the parents, supporters and those from the club that were able to come and watch – it was much appreciated by all of the players and coaching staff!

Goal scorers were George Constanti and Andreas Polycarpou with Man of the Match given to the back four and the goalkeeper, even though four goals were conceded, they all played really well.

Next up was Mike Koumi and Adam Broomfield’s Under 11 White who played their Challenge Cup Semi Final against a backdrop of fabulous support from parents and friends. The first half was even with both sides creating chances. The Under 11 White grew into the game with some good football and were unfortunate to hit the woodwork three times, once a double-doink off the bar! The second half started even but the opposition started to take control of the game and from a breakaway they scored with their first meaningful shot on goal. The Under 11 White levels dropped and unfortunately they conceded two further goals. Even so, it a good effort by the team who did well to get to the semi-finals.

Finally, at the end of long day, Dino and Nick Georgiou’s Under 16 White played their Spring Plate Cup Final and were so close to taking the game all the way to penalties. Having scored late in the second half to take the game into extra-time, conceding in the second period saw them lose 2-1.

Overall the game was very balanced and tight with neither team allowing the other too many chances to score and so the half ended in a goalless draw.

The Under 16 White boys continued to battle hard against the division winners, giving it their all, however a sudden counter attack allowed the opposition to score and take the lead.

The boys kept their heads up and continued to put pressure on their opposition and just before full time they managed to get a goal back. It was thoroughly deserved.

In the second half of Extra time the opposition managed to get a second goal punishing an unfortunate error and the Under 16 White just couldn’t squeeze in another goal before the referee blew the whistle.

Nick was predictably downbeat at full time and he said: “…It was a tough result to swallow considering how well the boys played but I think everyone who came to watch enjoyed the game. It was a performance we are all very proud of. I want to extend many thanks to all the support from the extended Omonia Youth family and friends as well as the parents. It was a big turn out today which we all appreciated. Goal was scored by Apostolos Tziatzios with Alex Pike named Man of the Match. 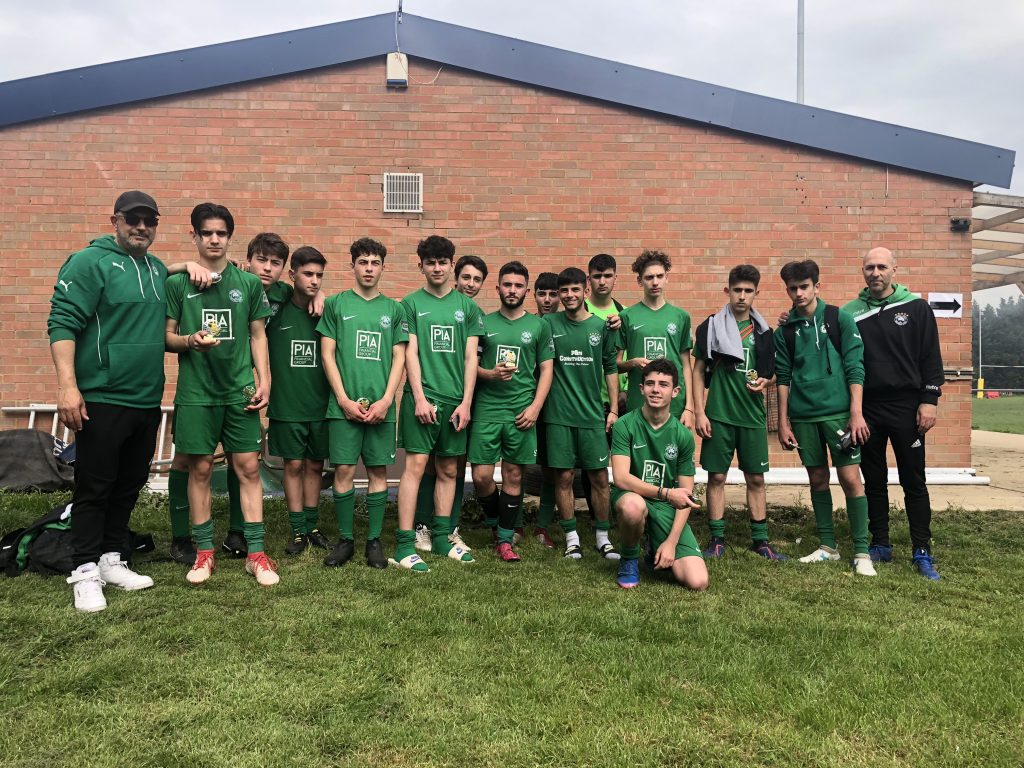 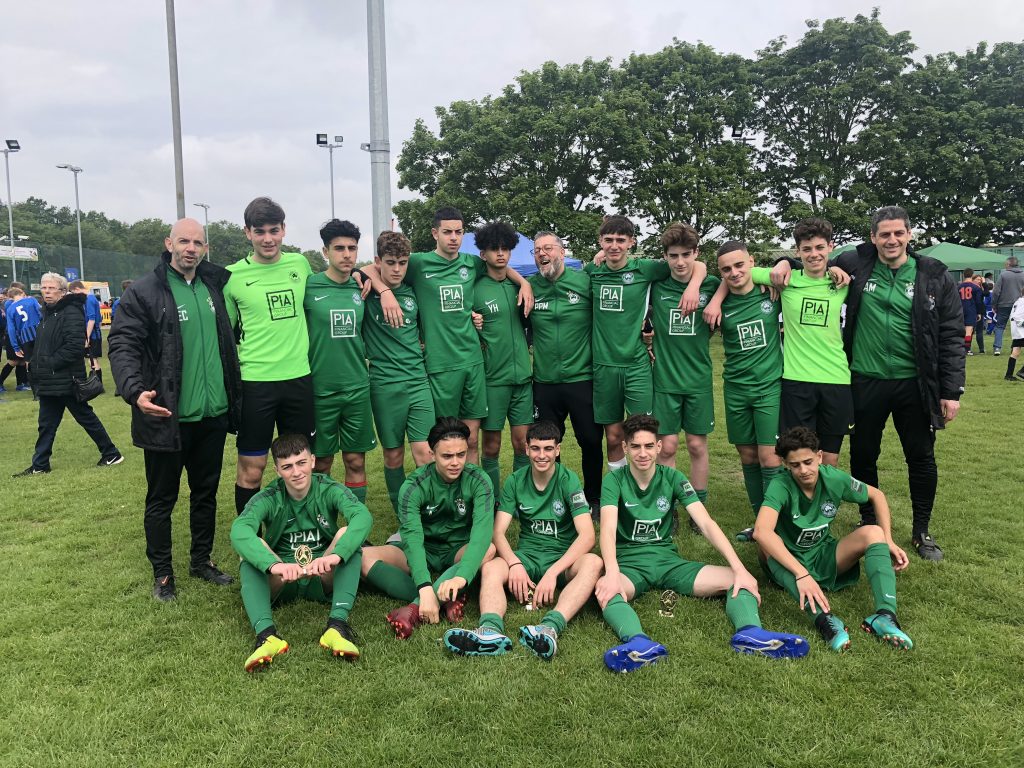