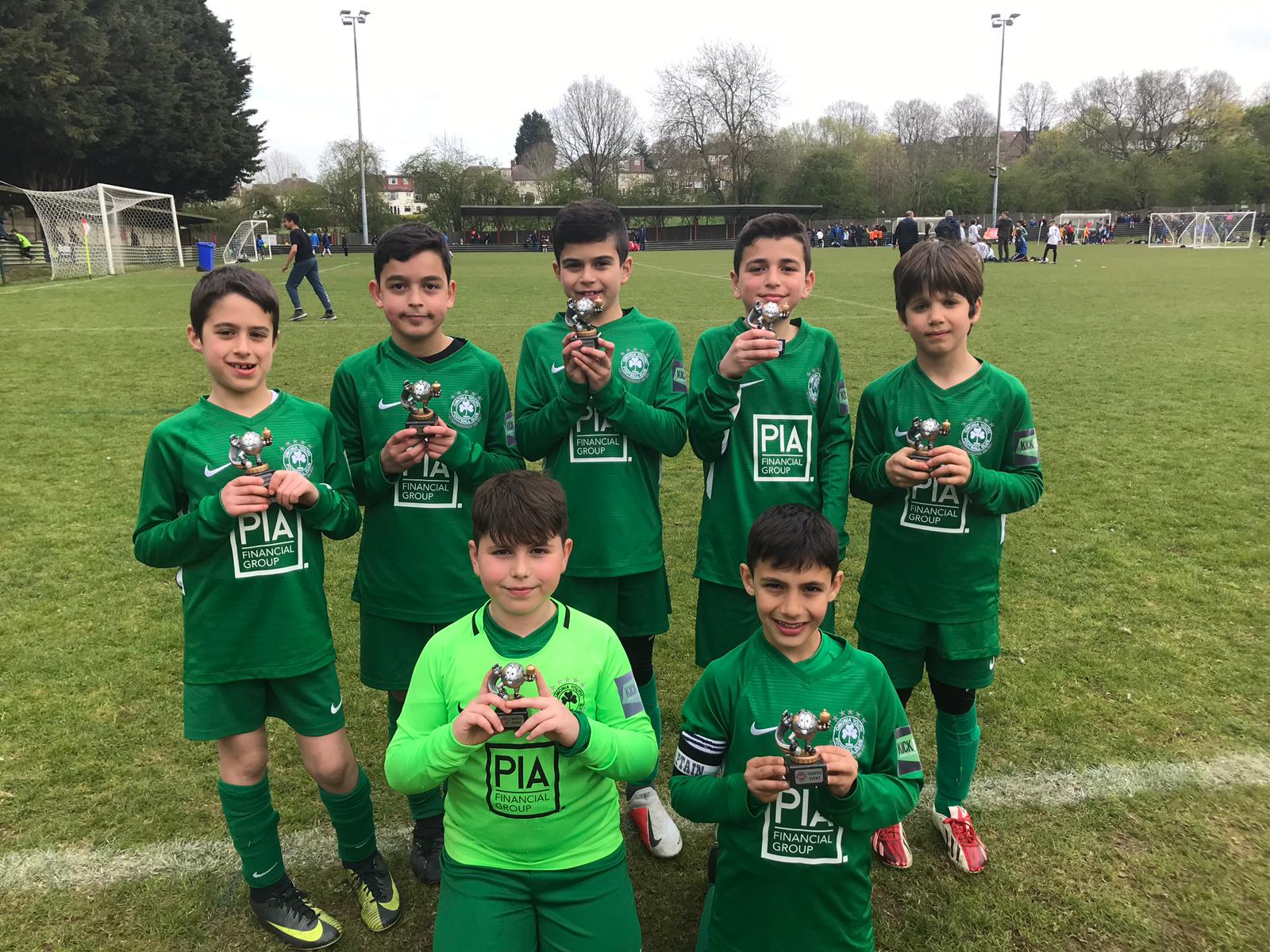 There was plenty of cup competition success for the many teams of community grassroots club Omonia Youth FC, sponsored by PIA Financial Group and Philip Ross Solicitors.

Most notably, Omi Omirou and Stel Loizou’s Under 13 Green will end their season with a Cup Final after a comprehensive semi-final win at home. Thanks to goals from Jamal Mohammed (3) and Luke Mina the 4-1 score did not flatter them. Ibrahim Mohammed was named Man of the Match.

Michael Pieri’s Under 14 White will take their place in the Spring Plate semi-final after a double-header six points saw them finish as best runner-up in the group format.

At this stage of the season, the non-competitive teams at grassroots level play in end of season tournaments and many of the teams enjoyed positive experiences. Andi Panayiotou’s Under 10 Gold took part in the Watford Friendly League Under 10 Festival. There was some lovely football played by the Under 10 Gold. Andi gave the team the opportunity to change their positioning around in the last game. It was refreshing to listen and watch as the team discussed where they themselves wanted to and play, where they thought their teammates should play and their reasons why. The team were fair and showed very positive decision-making. They showed compromise and were encouraging of each other. This showed fantastic team spirit and in truth, it was the best game they played all day! The Under 10 Gold also decided to make a day of the event and took a picnic for the parents and the children and it capped off a lovely day for all.

Vas Demetri’s Under 10 Silver won their group in the Watford Friendly League tournament and have the Finals Day to look forward to. Coaches Vas and Bekim are really proud of how far the team have come this year; they have shown great teamwork, respect and encouragement for each other.

Kyri Eleftheriou and Myri Demetiou’s Under 10 White also had a positive day at the WFL tournament. With only seven players the boys acquitted themselves really well in a very tough group with teams from the top division but they played well and never lost heart – both Myri and Kyri are proud of them all!

Finally Mike Koumi’s Under 11 White went through to the Semi Final of WFL Challenge Cup. It was a fantastic performance by the boys who finished top of their group having played 5, won 4 and drew 1 without conceding a single goal. Parents and players did the club proud.

In league action, Chris Gregoriou’s Under 18 White got back to winning ways by beating their title chasing opponents 5-1. It was a superb team performance with every player putting in a great shift. Goalscorers:

Savva Zavros and David Poncia’s Under 13 Gold put on an excellent all team performance winning 5-3 which included a superb goal from outside the box from James! Goals were scored by Mustafa (2), Valantis (2) and James. Man of the Match was Callum.

Nick Georgiou’s Under 16 White won their away league game 3-2 but they had had one of those days where plenty of the many goal scoring chances would go their way. They went 1-0 down at half time but the boys kept their heads up, put in the work and got the equaliser via an OG in the 2nd half. The home team managed to score again but again the boys came back, equalised and got the winner in the end just before full time. Good passion, good football and a desire for the result was shown. The other two goals were scored by Apostolos Tziatzios who shared the Man of the Match with Stefanos Kizas

Harry Theodorou and George Sammoutis Under 14 Silver bounced back from last week’s defeat to produce a quality team performance that we have been so proud to watch week in week out, rounding off a fantastic end to our league winning season winning 5-2. Goals from Viktor (2), Gabriel (2) and Mehmet who was also named Man of the Match.

Finally George Pantelides Under 14 Girls had an incredible end to their league campaign with a satisfying 2-0 victory A tactical switch (thanks to assistant coach Mike Petrou) saw the team line up 3-4-3, in a very attacking formation. A superb defensive and attacking display saw the girls finish higher in the league than ever before in their short history.

The opposition fielded a very strong team, using players from their A squad, but the girls were undeterred. An immaculate defensive display was necessary from Sapphira, Magdalena, Sophia and Emilia (as GK in the first half) as they were put under increasing pressure.

The Under 14 Girls had chances of their own: Andrianna expertly set up Lucia, who went close. Bethany led the line extremely well in the first half, linking with her fellow two forwards. Mary won a number of big tackles and linked up very well with Lucia, both of them making good use of the massive pitch.

Aleesa was definitely listening to the pre-match team talk and her amazing movement set up a chance for Chelsea to fire home a beautiful high volley from Andrea’s bullet long throw. The girls went in at half time with a slender 1-0 lead. The second half saw incredible tackles and effort from Andrea and Nicole in central midfield. Lydia was a substitute who understood her role well, and she stretched the opposition at every turn. Aleesa continued to worry the opposition with her trickery. Mary won a midfield battle and her through ball found Emilia, who was now playing on pitch at the left wing. Although Emilia started her run on the half way line, her weaving run bamboozled the defenders and her cool finish was met by incredible scenes by dad / coach George Pantelides and the travelling support.

There was still some defending to do and Andrianna, Lydia, Mary and Lucia all assisted to keep the score at 2-0. Bethany, now in goal made two great saves, including a shot that took a deflection at her near post. There was still time for a Emilia to set up Andrea, whose powerful run was thwarted at the near post by the GK. Sophia and Sapphira showed great composure to clear up at the back and Magdalena used her skills to run the ball out of the right back position for another breakaway. Andrea took the ball into the opponents half, just in time to hear the final whistle.

George was rightly proud of the performance and he said: “It was fabulous performance, a deserved result and a very nice way to end the season. We stand here as two very happy coaches, a squad full of delighted players and a set of parents who have been committed since day one. Wonderful!”

Player of the Match was a very tough choice, but went to two players: Lucia, who stretched the opponents throughout the game, and Nicole, who was combative and determined from the first minute to the last! 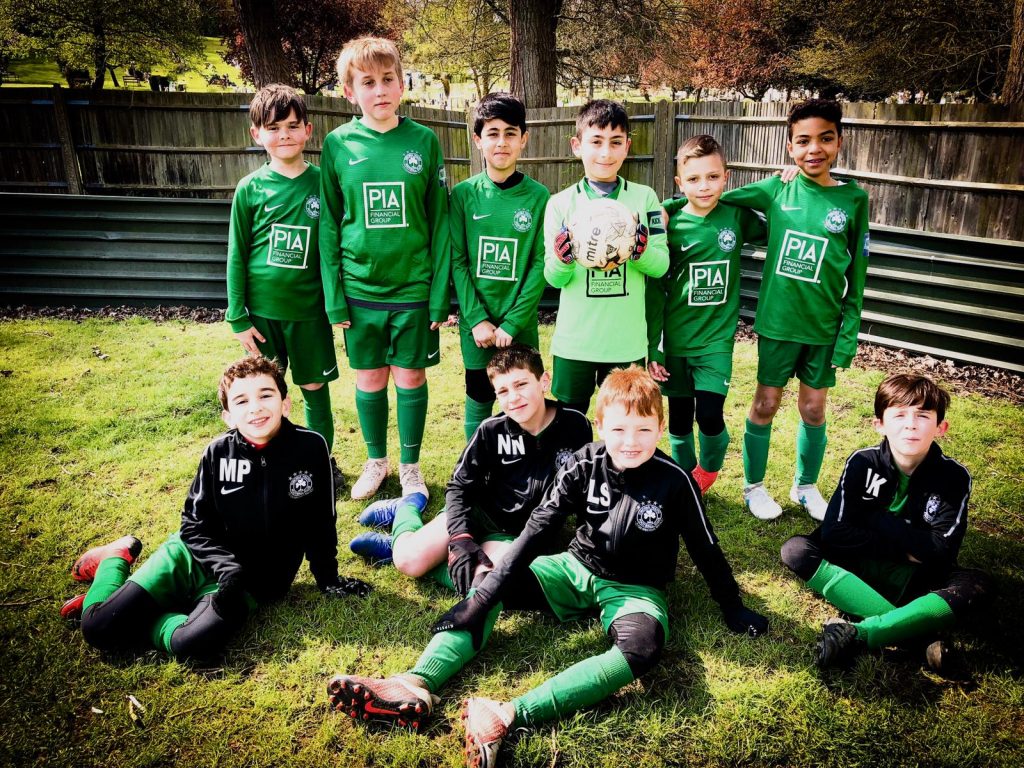 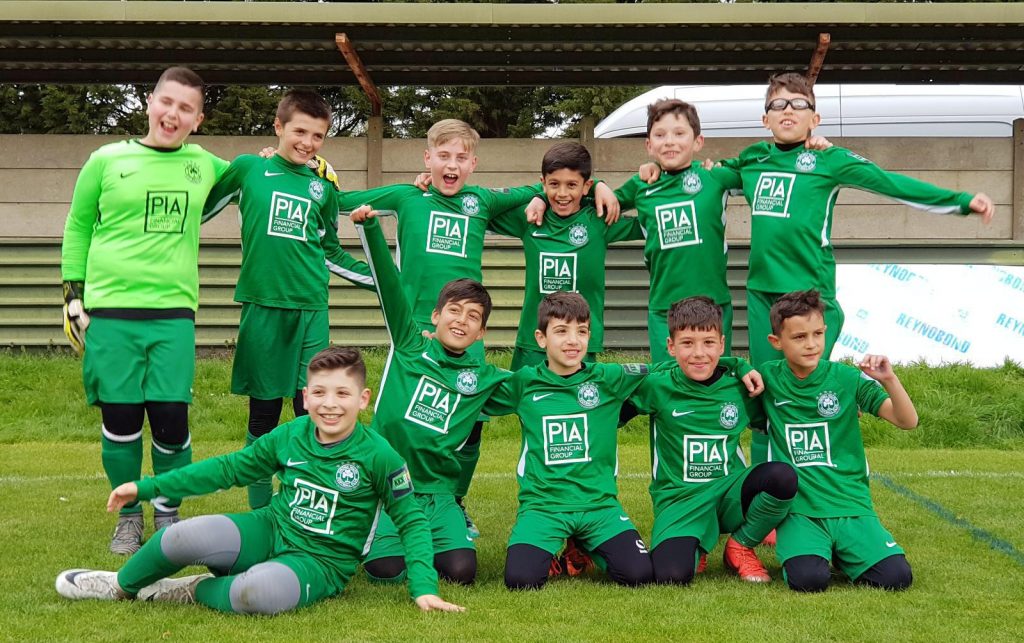 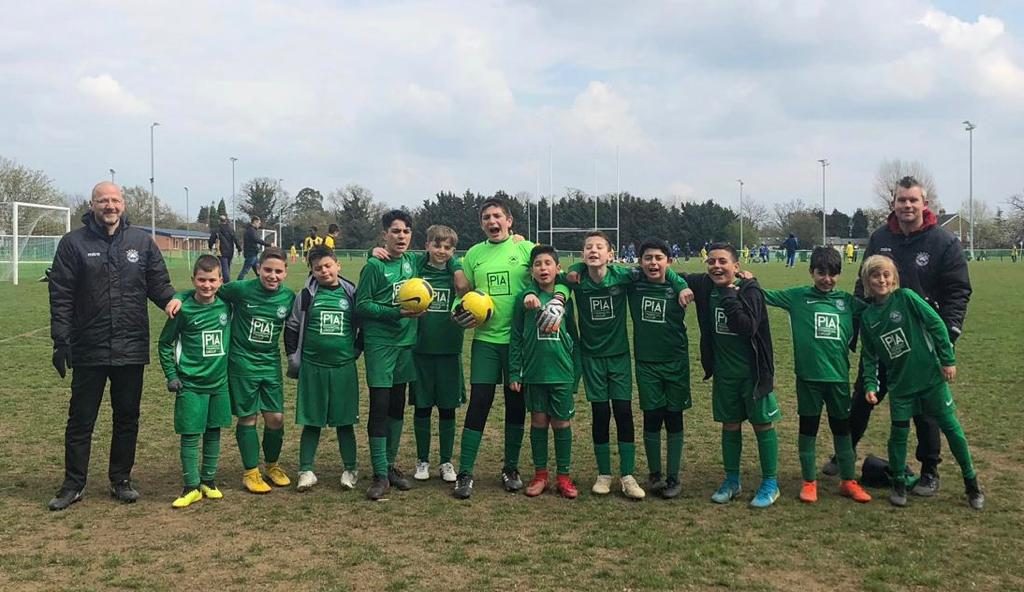