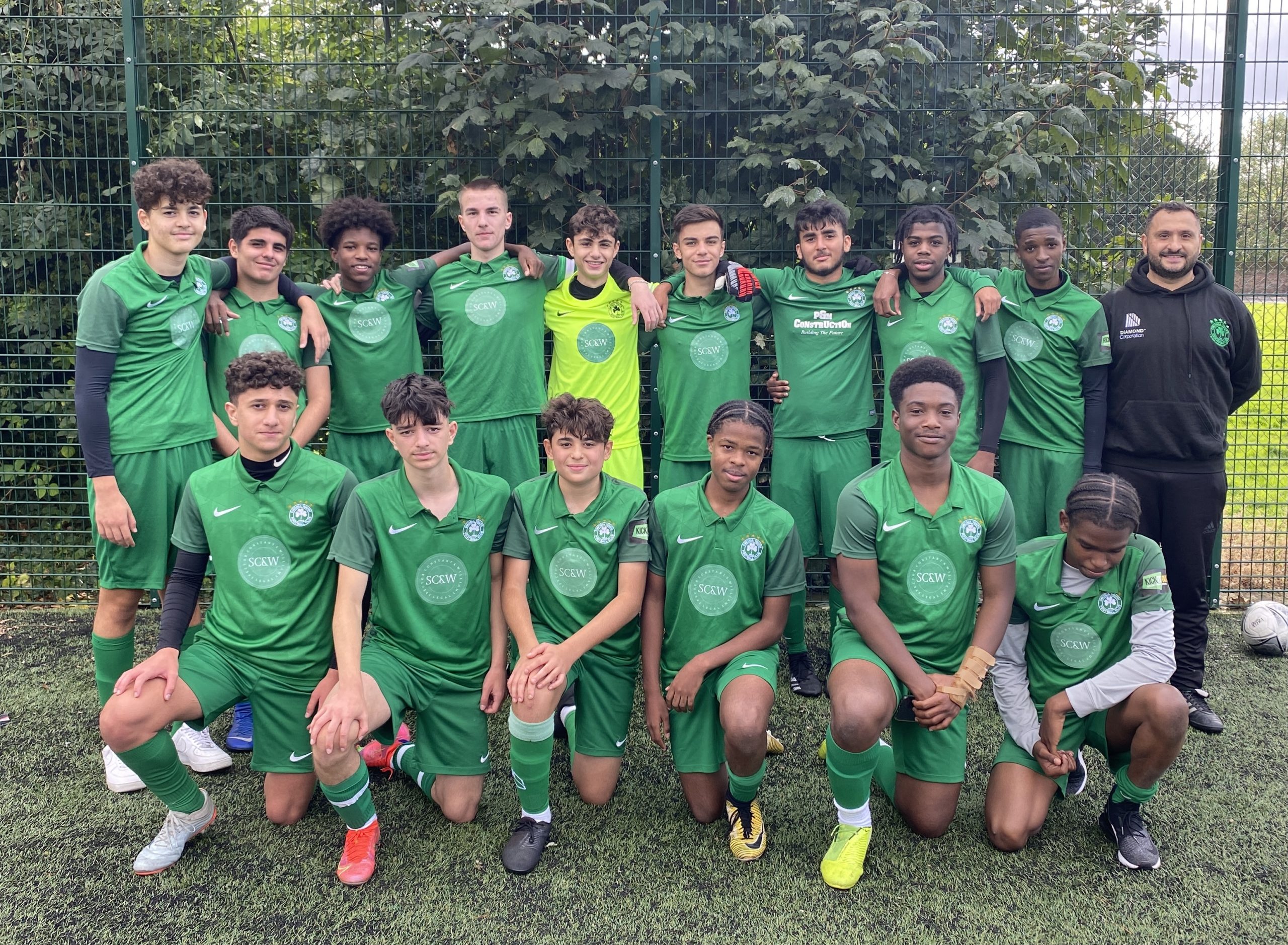 Plenty of games, plenty of goals and plenty of great performances for the many teams of community grassroots club Omonia Youth FC, sponsored by Spector, Constant & Williams, Vas Barbers and V Jewellers. Many teams were in County Cup action and came away with positive results while this week also highlighted how the girls’ football teams are continuing to thrive at the club.

Sophia Karanicholas and Samuel Arthur’s Under 14 Girls drew 3-3 in a highly entertaining match. It took a while for nerves to settle but coming back three times to finally get a draw demonstrated the incredible team work, determination and resilience these girls have. Both Sophia and Samuel were rightly proud of their team and as Sophia stated: “…They’ve truly made our weekend. Huge well done to each and every single player; they were outstanding!”

The coaches wanted to also thank the parents for their support and for their positive encouragement throughout the entire game. Goals were scored by Mea Branco (2) and Player of the Match Mia A whose controlled aggression and urgency on the ball really changed the tempo of the game. This was the change that started the team’s fight back which was topped off with a well-deserved goal.

Abduallai Adejumo’s Under 12 Falcons were up against one of the toughest teams in the league if not the toughest and it was clear from the outset the girls were up for the challenge. From the off the girls were able to continue repelling countless attacks; Elysia again pulling the strings at the centre of the defensive back three with Georgia and Faith either side. There were good moments for the front three of Elize, Aanya and Andreana with Andreana, playing as a striker for the first time this season, coming close on a couple of occasions. However just as the girls were getting in to their groove the opposition scored. One of this team’s strengths though is that they never let their heads go down and true to form they didn’t. Elize went on to equalise before half time, slotting home from relatively close range.

In the second half, the quality of both sides improved and it became a really entertaining game; end to end stuff on occasion. The opposition scored to go ahead before Elize scored again, from the penalty spot. 2-2 was the final score which was a fair reflection of the match.

Player of the Match was awarded to two-goal was Elize who gave a great attacking performance.

Myri Demetriou and Kyri Eleftheriou’s Under 13 White were very comfortable winners in their County Cup match, winning a one-sided match 11-0. After a long journey to Acton against an unknown team the boys were up for it from the first minute of the game. Having worked on switching play and using width of pitch in training, they executed this perfectly with the opposition having no answer to the Under 13 White. They raced to a 4-0 lead inside 25 minutes before centre forward Leo was sent off for a challenge on the goalkeeper. At this point there is a fear the wheels could come off, however both coaches were extremely proud to say the team were galvanised in adversity and proceeded to battle hard, playing a smart game, keeping possession and moving the ball about the pitch beautifully and scoring lovely goals. BY half time they were 5-0 up and proceeded to score six more in the second half. Every player was awesome, backing each other up whenever it was needed. The result was great but the it was the character, attitude and the game management which pleased both Myri and Kyri most.

Goals were scored by Andre (3), Andrew (2), Leo (2), Kleanthis (2), Lewis and Tasin. Nicholas was named Man of the Match. He was a constant menace on the right wing with multiple assists and working hard to help in defence too.

In their County Cup tie, Mike Koumi, Adam Broomfeld and Pany Panayiotou’s Under 14 White bounced back from last week’s defeat to win 7-1 thanks to a dominant display. Having a solid base allowed the boys to dictate the game and play their fast flowing football. They went into an early lead and missed a host of chances before scoring twice in quick succession to go in 3-0 up at half time. They conceded early on but kick on and score four further goals to comfortably go into the draw for the next round. Chris (3), William (2), Georgie and Luca were the goals scorers with Nick named Man of the Match for his outstanding centre forward play, holding the ball and linking up play. After the match Coach Mike said: “…as a coach it’s a pleasure to see every boy progressing and contributing.”

Elsewhere, two Under 18 teams registered wins. Mike Petrou’s Under 18 White Plus were superb as they ran out 4-1 winners. From front to back the team took full control with an excellent passing display. The score was not reflective of the number of chances missed and it could so easily have ended up at least 7-1. Nevertheless the boys worked hard to get their second win of the season.  Louis Petrou (3) and Alex Loizou got the goals with David Preece named Man of the Match.

Michael Pieri’s Under 18 White got their season going with their first win thanks to a 2-1 home win. The score belied the dominance they showed as the boys created plenty of situations and opportunities that should have yielded more goals. Returning Captain Sami Hristov gave the Under 18 White the lead by getting on to the end of a fine corner. The second half, even after several substitutions, the Under 18 White continued to exert pressure but they just couldn’t finish off good moves. The second goal finally came to settle nerves courtesy of another well-worked move; Noel Allen jinking his way in the box until he was upended and which resulted in a clear penalty being awarded. Noel himself stepped up to dispatch it home. The opposition scored with three minutes to go but the boys saw off the game to claim three points thanks to a 2-1 win. Andre B was named Man of the Match but there were many fine performances. A positive note to this game was the performance of the young referee who was outstanding. He showed good communication with players and adults, made excellent use of the advantage law and was always in control.

Kerem Denizer and Paul Pavlou’s Under 12 Green succumbed to defeat bit there were still positives to take from the game. They went into the half time break 2-1 down after a strong showing in the opening period. In the second there moments of amazing play from the boys, some good passing and one-twos. Their only goal of the game came from a player more used playing in a more withdrawn role but he stepped forward and dominated his position causing the opposition some problems. Aside from the goal he also rocked the cross bar with a confidently taken free kick. In all it was a great team effort. Goalscorer Lucas was named Man of the Match with Jam and Noah given the team’s most contributor award.

The Men’s team, sponsored by Crown Mobile Tyres, Athletic Development Club, The Master Locksmith and RAMEK asset management played againy title chasing Komi Kebir in the KOPA League and they out on a fine display against one of the division’s top team. There were plenty of spells of good possession and they created ample opportunities to score hitting the cross bar and post. They lost 3-1, with Andreas Kyprianou getting the goal but it is right to remember that many of these players are only in their second season in adult football. There has been a marked improvement in their positional discipline and style of play. Well done to all involved. 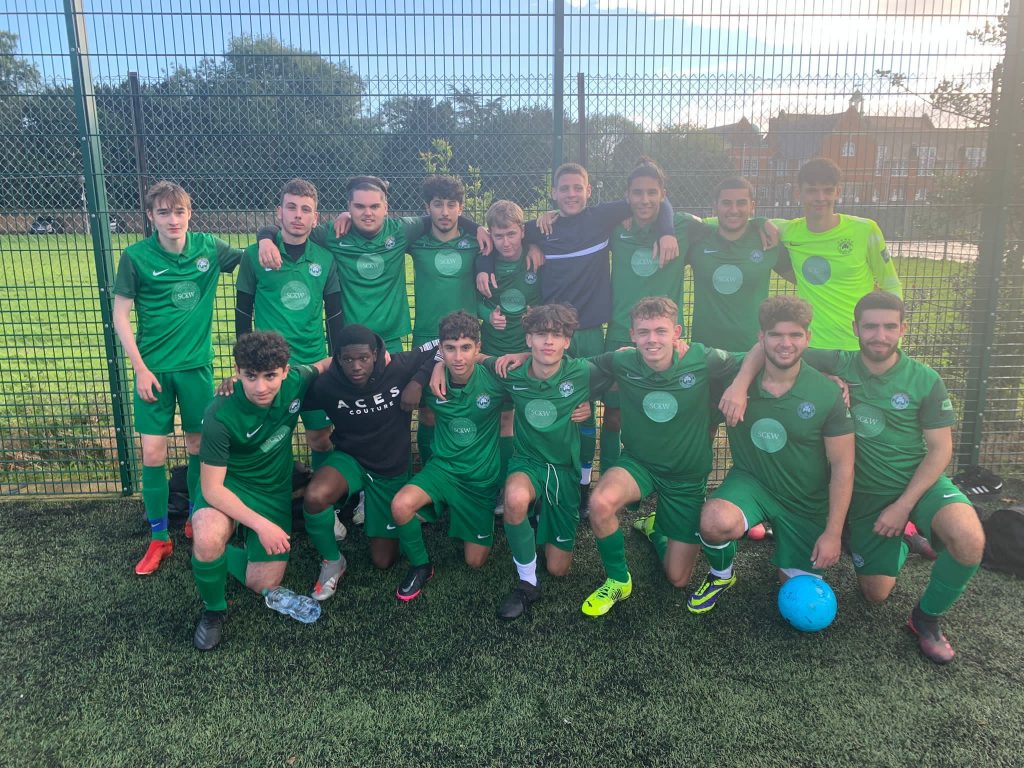